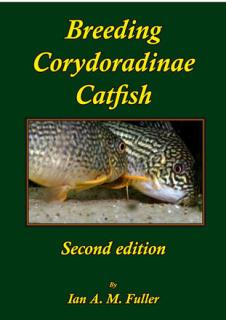 Well over a decade ago, I began a book review with the line, "I have been known to groan at the sight of yet another Corydoras book". However I then went on to explain why the first edition of Breeding Corydoradinae Catfish was a horse from a different stable. Self-published and drawn almost exclusively from personal experience, that first edition still stands apart when discussing books for the fishkeeper concerning Corydoras and their close relatives.

The second edition is, in essence, the same format but with the addition of that further decade of experience and, crucially, that of other similarly afflicted Corydoras breeders. General husbandry information, with tips and tricks for conditioning and bringing fish into breeding condition and the various ways to trigger breeding activity are included. Where we had 60 odd spawning logs in the first edition we have over 150 in the second; more than 120 by the author himself. Furthermore the introduction is considerably beefed up and more pictures appear throughout.

I especially liked the fact all has been brought up to date with described species name used wherever possible. The layout is crisper and the indexing more thoughtful and ultimately more readily used. The depiction of male and females of species in their spawning logs is a nice standard feature too. White space is used liberally and, in an A4 sized book gives an elegant appearance - it would be easy for the amounts of data for each species to get very messy in terms of layout and that has been avoided.

Gripes are minor. A few images are lightly pixelated. While there are plenty pictures and descriptions of the authors spawning tank layouts, there is little from the wider contributing field. Where an image is not that of the authors, the photographers name appears in the image. This appears a touch intrusive and duplicates the credit rightly given to the photographer in the text. For long tracts of the book the species name for a spawning log appears on the left and then it flips to the right for a while and back. For the price of a blank page here and there they could all be in the one place. You should surmise then, that there is little else to detract from a polished work.

This is not a visual picture book and doesn't delve into the realms of Corydoras identification. It sets out to share information about reproduction. If you have the first edition, then there is so much more in this book that the things that drew you to make that first purchase are doubled here. If you don't have the first book and are thinking of (or are) expanding your Corydoras keeping beyond a handful of species then this is the standard work on taking your hobby to the next level.

At just under forty quid, it's not cheap, but that's the price of only a few Corys. In fact some of the species bred probably cost more than the book! One or two breeding successes and the book pays for itself. If there is a better printed source of information on breeding Corys in the English language then this reviewer is not aware of it.