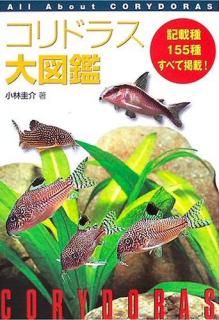 Another book that documents the Japanese (and worldwide) fascination with this group of catfishes, this work appears to provide a good general overview of the group (I use the word "appears" because I am unable to read Japanese and gauge the quality of the text).

The front part of the book gives a general introduction to Corydoras, covering the fossil record, biogeography and general anatomy of the group. A short article on collecting wild Corydoras (with some habitat shots) is also provided. The rest of the book covers 155 species of Corydoras, with the usual (mostly stunning) photography one has come to associate with Japanese works. If you own other Japanese catfish books, some of the pictures might appear familiar, as they have been reused (á la TFH). Sadly, pictures for some of the species are represented only by preserved specimens, or copies of the illustrations from the original descriptions. Even more sadly, some of the pictures appear to be digitally retouched, whereby the fish have been superimposed on a more presentable background. The described species are presented alphabetically, with the undescribed species following grouped together by country of origin (the fish appear to be grouped by color pattern within each country section). Strangely, very little reference to C-numbers is made for the accounts for the undescribed species.

The rest of the book covers basic information like how to set up a tank for Corydoras (with some beautiful layout ideas presented), how to sex them and breed them, as well as discussions on suitable tankmates, and identifying and treating common diseases. The highlight of this book is probably the interview with Isaäc Isbrücker (something you don't normally find in a book like this).

As I previously mentioned, I am unable to gauge the quality of the information presented within, but this book appears to cover it all. Get this book if you are a Corydoras fan (but probably not if you already have a ton of Japanese catfish books), or if you enjoy the work of Japanese fish photographers. There is otherwise little going for it (especially if you can't read Japanese).