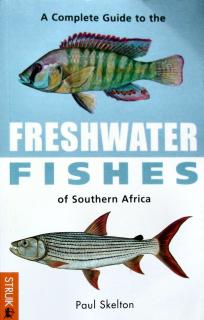 Skelton's Guide to the freshwater fishes of Southern Africa covers a lot of ground (or is it water?). All major drainages south of the Cunene, Okavango and Zambezi rivers, excluding Lake Malawi and the Shire River, are covered. All told, it provides coverage for 12 countries encompassing all or part of Angola, Zaire, Tanzania, Malawi, Mozambique, Zambia, Zimbabwe, Namibia, Botswana, Swaziland, Lesotho, and South Africa. Over 30 fish familes are covered excluding the catfish families Claroteidae, Austroglanididae, Amphiliidae, Schilbeidae, Clariidae, Malapteruridae, and Mochokidae.

Every species is illustrated beautifully in scientific detail and presented alongside a range map. For each species presented the book provides a written description, a written distribution, notes on the animal's biology and ecology, and uses (i.e. food fish, aquarium fish, bait for larger fishes, etc). The book is really much more of a usable field guide than most "freshwater fishes" books, which are often more scientific treatise than guide. This book was not meant to sit on a shelf, but to get lugged around with your seines and buckets in the field. It is thankfully soft cover making it less expensive and an easier fit in the backpack.

There is one section of this book that must be held up as particularly useful. The Introduction, 60 pages in length, is actually split into 10 subsections. These subsections cover such useful topics as: a history of southern African ichthyology, geographic background, aquatic systems and habitats, factors affecting fish distribution, aspects of biology and ecology, taxonomy, and the collection and preservation of fishes among other useful background. The introduction alone makes a fine short read on a lazy Sunday.

If I could find one fault with this book, it would be that common fish names are only provided in Afrikans. This seems a glaring oversight given that Afrikaners make up only a small percentage of the population of the areas covered. Providing the Zulu name for Amphilius natalensis in KwaZulu-Natal or the Xhosa name for Austroglanis in the Western Cape would have made this book even more useful.

The second addition adds a small number of species described between 1993 and 2001. The largest obvious change is that the author has updated many place names to reflect their post-apartheid names. If you are old enough to remember place names like the Transvaal and Pretoria, then you might find the 1993 ed. more comfortable. However, times change and we must now adapt to place names like Limpopo and Thswane. They are actually not new names. When William Burchell published the first description of a south African catfish in 1822 in his "Travels in the Interior of Southern Africa", he named it Clarias gariepinus after the river it was found in. For the next 120 years we called that same river by its European-derived name, the Orange River. Perhaps now, in the 21st century, it is high time that it became the Gariep River again.