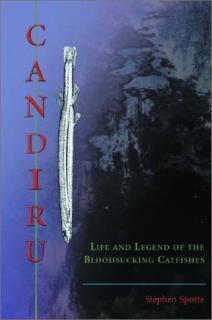 The stories that surround certain members of the Neotropical catfish family Trichomycteridae are almost legendary in proportion. Certainly, the most oft-quoted example is the one involving the members of a certain subfamily (Vandellinae) and their purported ability to inflict grievous harm (intentioned or otherwise) by swimming up the human urinogenital tract. The object of this book is to explore the veracity of this tale, providing the reader with ample background information along the way.

The first two chapters of the book provide a detailed history of outlining the origins and the various iterations of the tale, and the next two chapters provide a detailed account of vandelline taxonomy. Chapters five and six cover the physiology behind prey detection and blood digestion respectively, while chapter seven lists and briefly discusses the hypotheses behind the possible attraction between vandellines and urinary tracts. Chapter eight quirkily deals with all manner of genital sheaths among the native peoples of the region, and examines the reasons for the use of these coverings. Chapters nine and ten provide an interesting account of the author and local ichthyologists catching vandellines and performing field experiments on the nature of feeding attractants. Chapter eleven deals with tracking down an urologist that surgically removed a vandelline from the urinary tract of a patient, and the final chapter is a tale of how one may go about designing a candiru exhibit.

This is one of the more interesting volumes on catfish biology that I have read. Granted that the section on vandelline taxonomy is a little heavy reading (however, the determination of the author in tracking down and translating non-English species accounts is laudable), and the final chapter on the candiru exhibit would have been better off excluded, the rest of the book is still quite a fascinating account of how the author attempts to track down the origins behind the tale. No conclusive statements regarding the veracity of the tale are made, and the reader is left to weigh the evidence and deduce the answer. This is still an interesting book that covers just about all aspects of vandelline biology and then some. It is a pity that the book is out of print and not easily available, but I would definitely recommend it to anyone interested in the biology of these fascinating catfishes.