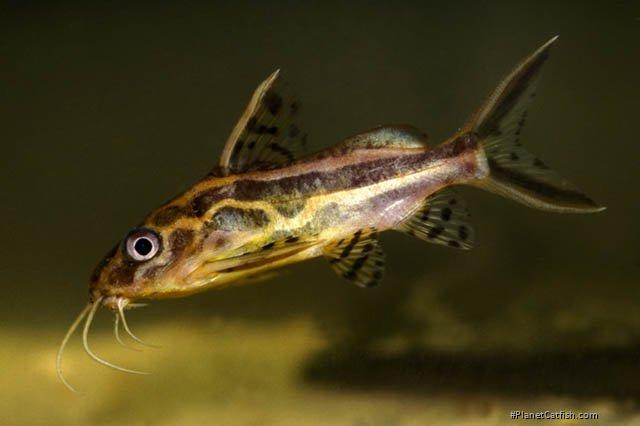 So-called because it is a very stripey fish and, at some point, put someone in mind of the pattern found on a pair of equally stripey Pyjamas; the Pyjama catfish has more than a quirky common name. It does truly have a lovely colouration (although I have yet to encounter such on any night garment) even its belly is a golden harvest yellow and this is a real favourite catfish of mine, one I have been wanting to write about for some time now.

Those of you who have read the catfish of the month article for Synodontis angelica may remember mention of a photograph in an aquarium book which, virtually single-handedly, started me down the road of unusual catfish collecting. At the time I wrote the S. angelica piece, I only had the memory of the photo in my mind (having given the original book to a soon to disappear friend many years before). Happily, since then, a random visit to a small fish shop in Glasgow yielded another copy of the treasured book. Hopelessly out-of-date and more than a bit dusty, it was still a personal prize find and I smiled the whole drive home. It's always a good idea to have a good rummage through the book section of any uncommonly visited store - you never know what you might find. 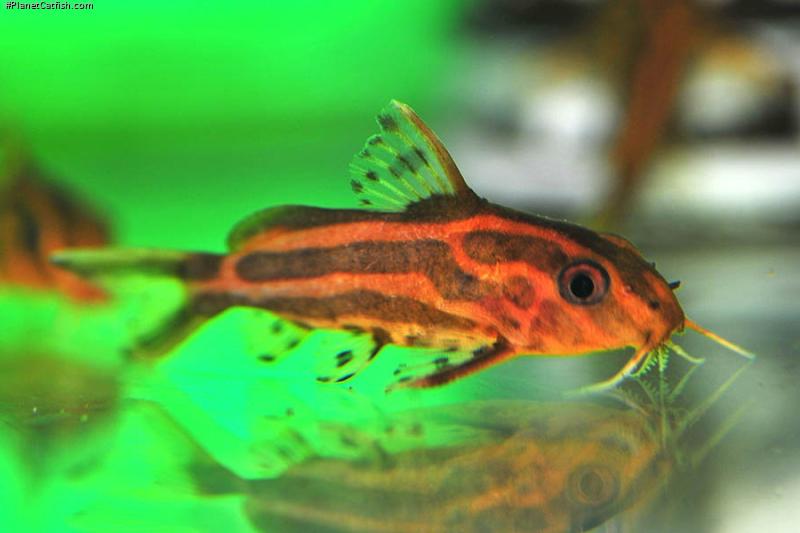 At the time I first saw S. flavitaeniatus in that book, another fishkeeping friend and I were in awe of it and the S. angelica pictured alongside. I have yet to see a more beautiful picture of S. flavitaenitus. Soon thereafter however I was crestfallen to discover the exorbitant price they commanded - well beyond the financial capabilities of a mere schoolboy - and the fish became more awesome; indeed moving into the realms of legend.

Prices charged for this fish have dropped twenty fold since the early eighties and I now have a small group of these fish in one of my most favourite tanks to observe. The attraction goes beyond the distinctive rusty brown and painted gold stripes to the heart of its charm - it's the character and husbandry of the fish that are striking and elegant too. Many Synodontis species are quarrelsome or grow quickly to large adult sizes. Not the Pyjama catfish which is a slow grower (despite greedy eating habits) and my fish have yet to show any aggression towards each other. Although they have a surplus of hiding spaces and sole occupancy of their tank, it is not the most roomy. Yet there is still no sign of trouble in paradise.

The decorations in my tank are PVC pipes upon which pieces of roof slate are placed horizontally. In addition I also use old "gourmet" coffee jars which are made of blackened glass. Some catfish reject these dark, cavernous retreats but all Synodontis love them and in the case of the Pyjama catfish, are occupied by the obvious ringleaders of the gang. Some plant cover is provided by a couple of pieces of java fern but the tank is dimly lit from the fishroom light rather than a dedicated tank-top fluorescent tube, so major plant growth is not possible. Feeding is flake twice daily or frozen bloodworm or brineshrimp once a day. Food is withheld periodically (around one day in ten) and the fish are visibly more active in their search for food or the claim of it when it is eventually available after this period.

I find that feeding any fish that gorges itself benefits from a forced break in feeding now and again. The larger the fish, the longer the fast. This technique is not a great idea for continual grazers such as Corydoras and most Loricariids, but it works well with Synodontis and most other catfish. Although just a hunch, I feel it also benefits the filters. 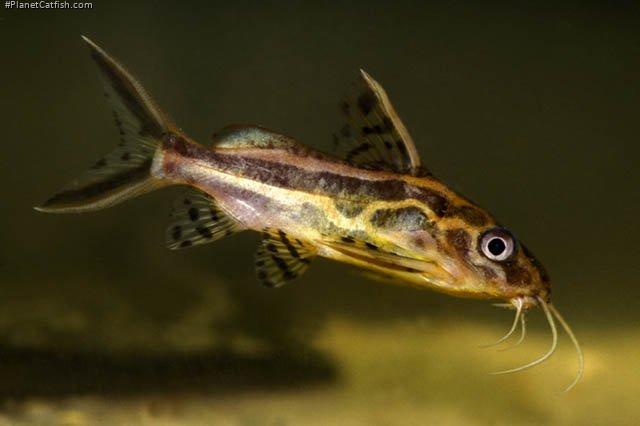 There are many strikingly species of Synodontis, the reason this one comes so highly recommended is its easy going, playful nature and relatively small adult size. Pay good attention to water quality and these fish will reward you for many, many years.