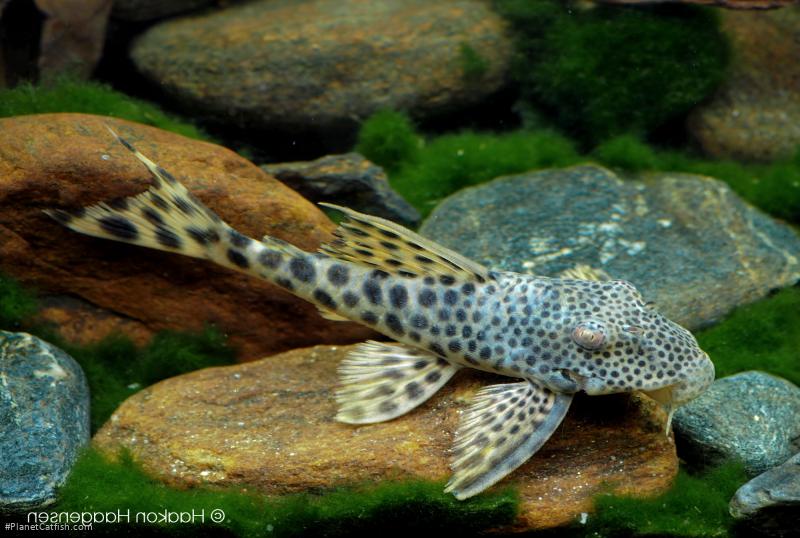 L-numbers and their reason for existence are both topics that have been written about before; this month’s featured catfish is a good example of one that has gone full circle from an unidentified photograph to a newly described species. Perhaps the best way to introduce this is a potted history in the form of a timeline of events.

We have to go back to November 1990 to find the introduction of L075 in DATZ. In November 1992, LDA02 was introduced in Das Aquarium. A little later in May 1993, a very similar fish was introduced as L124. Then, in January 2002, L301 was introduced. From a scientific viewpoint, there are two key dates. The first is the erection of the genus Ancistomus by Isbrücker et al. in 2001 and secondly the description of Peckoltia sabaji based on specimens from the Guyana shield regions of the Essequibo, Negro, and Orinoco River drainages of Guyana and Venezuela.

These fish all differ in collection locality but could not be separated by external characteristics. They have different hues of colouration depending on age, locality, mood and perhaps diet or water parameters. They range in background colour from bright yellow to beige and the fins can be coloured from a light orange to yellow. The spots are always black, always small on the head and larger on the body. The spots get progressively larger the closer they are to the tail. Fin sizes and body proportions however remain identical when comparing similarly sized specimens. It may seem that I’m lumping a lot of fish together here, but I’m excluding from this L012, L013, L036 and L163 that are two or three similar but probably different species (L013 likely being the juvenile form of L012, L163 being a very uncommon import – if you see L163 for sale it’s probably L012/L013). L036 or as it is formally known, Hemiancistrus spilomma, is also discussed a little further on.

The catchment area of L075 and LDA02 was given as the Rio do Para, in Brazil, specifically Pará state intributaries of the Rio do Pará (Portel), Rio Tapajós (Itaituba) and Rio Curuá Una. These lie outside the areas mentioned by Armbruster; and also in a different drainage system yet it is still part of the great amazon basin and so its seems at least feasible that L075 may be the same species. L124 was stated as hailing from the middle reaches of the Río Orinoco between Puerto Carreño and Puerto Ayacucho in Venezuela and also Colombia. Both these towns lie on the border between the two countries and indeed the border is the river itself. So, if you catch L124 and bring it to land on one bank it’s a Colombian fish but it’s a Venezuelan fish on the other! I mention this to illustrate the point that fish (and indeed rivers) don’t really care much about how humans choose to carve up the land. The Orinoco drainage is included in the range of Armbruster's description of Peckoltia sabaji, so L124 is likely to also be this species. Finally we have L301 from the Rupununi river in Guyana; this is the area visited by Armbruster, and this fish, out of all the three l-numbers, must most likely be Peckoltia sabaji. I like the simple life and am happy to call all three species P. sabaji, certainly until greater investigation of the various populations prove otherwise. Even if I were to take a more conservative view, I'd still have to view L124 and L301 as Peckoltia sabaji.

So, onto Peckoltia Vs Ancistomus, and indeed does Hemiancistrus come into this? There were a number of new genera introduced with the DATZ 2001 loricariid special, volume 2. Detractors of this publication cite the appearance of such descriptions in “grey literature” (i.e. aquarium magazines as opposed to peer reviewed scientific journals) and the extreme brevity of some of the descriptions. Quiritixys for example was introduced in under 100 words; the actual description minus the explanation of etymology was just 37 words. Ancistomus was introduced in less flimsy manner, but the description wasn’t a great deal better. The point being that such descriptions may not have passed muster in a peer-reviewed journal; surely more research, morphometric measurements and phylogenetic discussion would seem required? All that said, proponents of the article would point to the international rules of zoological nonclamenture which state that this is all fine and good. It is a valid description even if it is not followed by the bulk of the scientific community. That leads us on to ask what is “the bulk of the scientific community”? The description did involve Isbrücker after all and it is hard to think of anyone else who has published more comprehensively on the family Loricariidae. However, no more recent publications have accepted any of the "DATZ 14" genera.

My personal view would be that I would dearly like to have seen many of these new genera introduced but with the weight of research required to introduce them with greater potency and longevity. Recent collusions between the scientific community and advanced amateur aquarists have been fruitful in other areas, why not here? Again, in my view, it is hard to explain what makes a Peckoltia as opposed to a Hemiancistrus and both genera have been used as something of a dumping (or should that be lumping) ground over the past century or so. New species of Hemiancistrus have been described recently that also appear to fit the Ancistomus mould – it seems wholly inconsistent that they be “tentatively” described as such and not as Peckoltia (or indeed vice versa) and that placement be based upon colour pattern and morphological characteristic in the absence of a phylogenetic definition of Hemiancistrus. An unlevel field of play! Peckoltia and Hemiancistrus are almost certainly not monophyletic and perhaps Ancistomus may have a role to play in the future unravelling of this particular barrel of fish. As with official rulings in the world of sport, it would be nice to have some consistency – but then again we’d be short of things to talk about after the game.

In the meantime we have a name for our l-number. Perhaps that’s no bad thing? Irrespective of what you call it, P. sabaji is an undemanding, very striking pleco that would grace most aquaria. It doesn’t grow large but is big enough to be a real showpiece fish. The largest one I’ve kept is about 150mm not including the tail fin and really is a stunning - if a little shy - fish. Even at this size it is not territorial as plecos go and I would recommend keeping a group of them. As I've mentioned, they are a little timid but active dither fish tempers this; they don’t however appear to be equally settled by larger fish. Armbruster notes the following in relation to the fishes ecology; "Found in medium to large rivers among boulders. Usually in runs and riffles, but small individuals may be found hidden in the holes of lateritic rocks in pools. Most specimens I collected were collected at night. The largest individual was captured in a gill net in the main stem Essequibo and it appeared to be moving from deeper water into the shallows where there were exposed boulders."

Despite being a Peckoltia, the fish doesn’t appear to spawn as readily; perhaps this is because of slightly larger than normal adult size and the related possibility the fish may take longer to mature. Furthermore there is presently no evidence to prove it is a cave spawner or indeed any firm information on how it does spawn. Its more elongate form (compared to the stubbier “classic” Peckoltia shape) may also have a bearing on breeding habits – what does this tell us about the fishes habits in the river too? Also, sexual dimorphism doesn’t appear to follow the normal Peckoltia pattern of males becoming “furry” with odontodes sprouting along the posterior half of the fishes body. Aquarists further oberservations may well have a significant role to play in the understanding of this species' many facets, even over and above the cut and thrust of taxonomy and classification.

In summary, this fish has been arriving at fish stores from time to time with the price tag dropping slowly. You can now pick up three or four of these fish for the price of a zebra pleco. It’s about time more people did as this is surely one of the nicest all round l-numbers that any aquarist can enjoy.