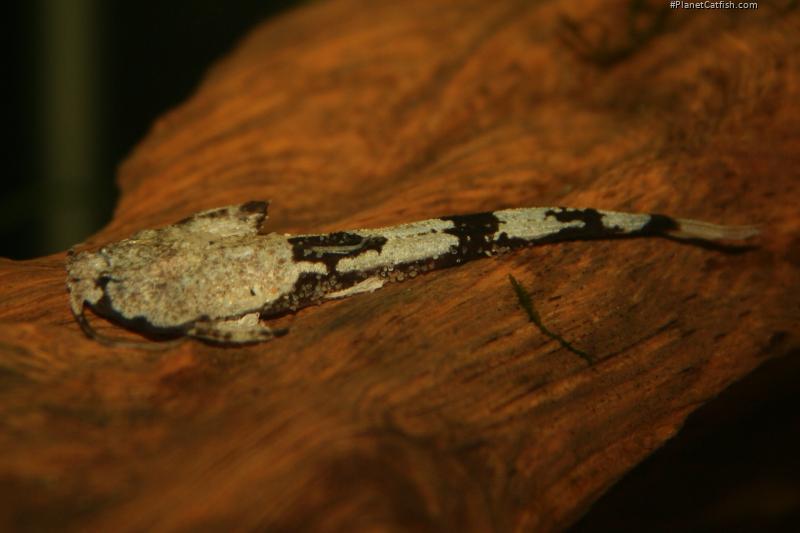 The norm here is however rather difficult to define, with many banjo catfish (also known, at least to German hobbyists, as Frying Pan catfish) begin inanimate brown fish that more or less resemble something that looks like it peeled off a large lump of bogwood. In a world where that's normal, you're going to have to find something pretty odd to stick out at you.

This was what attracted me at first to the ghost Banjo catfish, Pterobuncephalus dolichurus, I found them for sale in all black tanks. Now, that would normally be something of a marketing no-no for these fish, but in this case it made them instantly striking from a visual point of view. They were creamy white in colour. I had a good look at them and for all I could see they other wise looked innocuous and in good health.

This genus of banjo catfish is unusually flat and they have long tails similar to the eel-tailed banjos like Aspredo and Platycotleyphorus. While those genera are the giants of the genus are found, often in estuarine conditions, at lengths of over a foot long (30cm), by contrast Pterobunocephalus don’t get bigger than 3.5” (9cm) and they are dainty with it. I’ve had mine for three years now and they are not even that big. They are easy to keep with gentle fishes and will eat anything including flake foods.

With the benefit of hindsight I think the unusually light colouration is simply because they are adapted to live over white sand rather than in leaf litter — a suggestion I make because of my observation that they also like to burrow in sand. They sit in the sand with only the top ridge of their mouths on display. These ridges also seem like an adaptation to this lifestyle and whenever food floats by, they creep or sometimes more quickly emerge from the buried state to sit on top of the substrate to eat. They simply do not leave the substrate otherwise. As Banjo’s go, this also makes them relatively tolerant of current.

By far the most remarkable aspect of this pretty little fish is its reproductive habits. While I have no experience of this first hand, John Friel on his section devoted to the Aspredinids within the “tree of life” website shows a picture of a remarkable reproductive strategy. These fish actually physically attach themselves to their eggs (or perhaps vice versa) by ways of thread like membranes from the stomach. While this is known in the larger eel-tail catfish and has been brilliantly photographed by Ingo Seidel, the fact that this little catfish also employs the same strategy suggests, at least to me, that when you live in the unprotected expanse of a wide sandy stretch of river, the best place to lay your eggs is out of sight and that’s only going to be under your own camouflaged body.