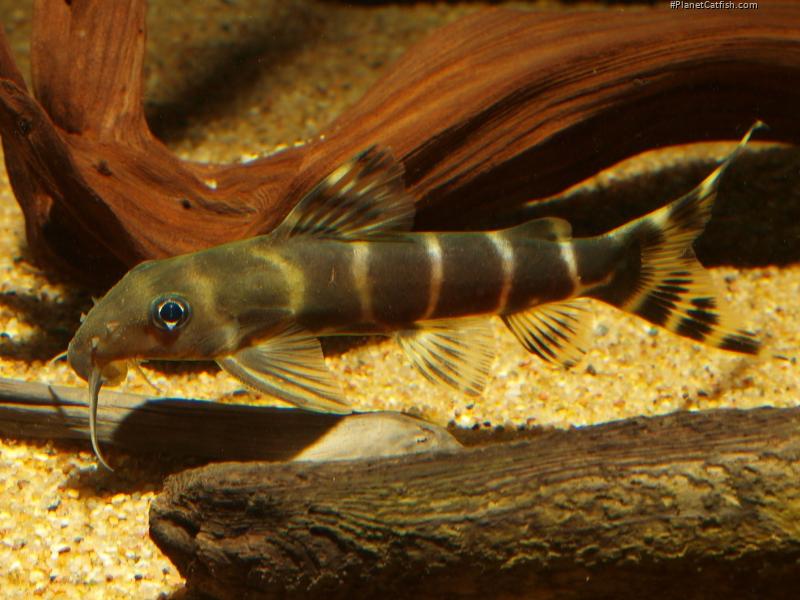 This month, our appreciation goes to Yann Fulliquet who introduces a sometimes seen slender beauty from the racy parts of the Congo Basin in Africa.

Alongside the Pyjama Syno, S. flavitaeniatus, Brichard's Syno is certainly one of my favourites in the genus Synodontis. At first glance, they look unusual for a Synodontis; their body is very cylindrical, with a huge sucking disc as a mouth, demonstrating a clear adaptation for their natural biotope. Indeed, when housing this species, it is important to remember their natural biotope is life in and around rapids

So it is important to recreate such current in the aquarium, you also need to provide plenty of hiding places constructed with driftwood and rocks. Unlike Rift lake Synodontis they do not shoal together much. Although they are indeed territorial towards each other, especially when defending their resting place, I have yet to see a real injury due to such a conflict. Such skirmishes only produce nipped fins or teeth marks on the skin of an individual. I've not witnessed any territorial behaviour towards another fish.

They need a good water quality as they are less tolerant of water pollution, so a healthy water change on a weekly basis is a good idea, they will reward you by being more active after that and will display their brightest colours.

Feeding is not too difficult; they have an omnivorous requirement, the vegetable matter aspect of which seems important. In just a matter of a few weeks, my group of five managed to destroy a beautiful Anubias baterii I had in the tank with them. Otherwise they seem to eat anything.

Breeding is very rare and has been managed only once as far as I know, but the success was not as great as due to water a bit too hard and the pH a bit too basic, resulting in the loss of most of the eggs and fry. They had laid the eggs under rocks and cave. For a successful spawn, soft and acid water is a good way to start with.

This is one species of Synodontis that has been commercially farmed using hormone techniques, particularly in Eastern Europe. If you have any doubts about the quality of the stock for sale, you should enquire as to its origins. While such techniques take any pressure off wild stocks, they have been known to produce undesirable hybrids in the sad quest to produce "something different" and make a quick buck. This is really unnecessary in the case of our featured fish as it is such an unusual and attractive Synodontis anyway!

In closing, if you ever come across this species for sale some day, I would jump at the chance, as they are so unusual for a Synodontis. Their price has also well dropped considerably and a small group won't impact off your wallet in the way it would have years ago.