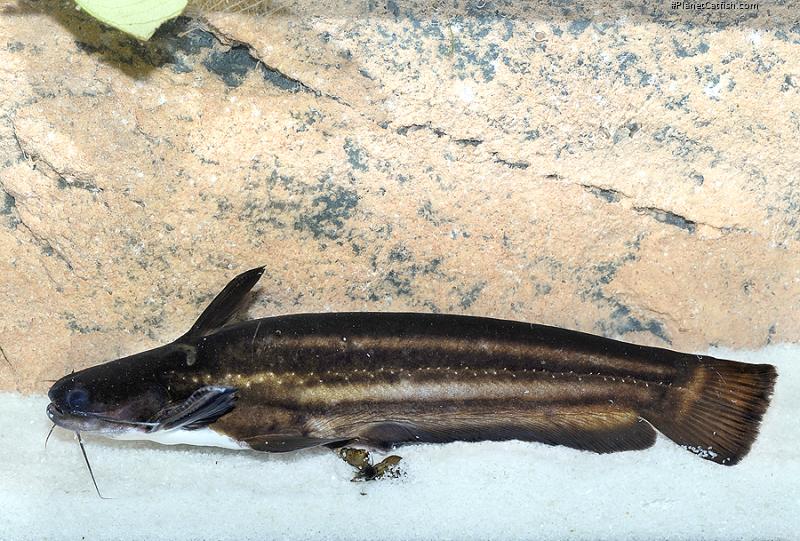 There are defining moments in the history of anything. PlanetCatfish has had a few; our launch as a dot com, the arrival of the forum, our ten year anniversary and a whole host of "meeting in the real world" events. But back in the world of the web, content is king. So, it is with a great sense of the moment, I'm delighted to introduce one of the hobby's kings of content, Lee Finley, and this is no April fool. Lee has been keeping fish since before I was born and has written and knows a huge amount about the many and varied aspects of catfishes and their captive care and breeding. I'm personally delighted to publish someone from the catfish world whose name I've known for as long as I've been able to pronouce plecostomus. Here's what Lee has to say about the Striped Woodcat, Trachelyopterichthys taeniatus.

There is a great amount of physical variation in the catfish family Auchenipteridae, and this is strongly exemplified by the species covered in this month's entry.

The genus Trachelyopterichthys contains only two species: T. taeniatus and T. anduzei. The latter species is from the upper Orinoco basin of Venezuela and to my knowledge has not been imported as an aquarium fish. The known distribution of T. taeniatus is much larger (upper Amazon basin) and it has been reported from numerous areas in Brazil, southern Colombia, Peru and southern Venezuela.

For size considerations, T. taeniatus is not overly large and reaches a total length of around (or slightly longer than) 15cm (6 inches).

As an aquarium fish there are no special problems with this species. Temperatures within the standard range of 72° to 78° F are fine. The values for pH are also plastic, and can range from 6.0 to the low 7's. As with other auchenipterids it is best to avoid letting the water conditions slip and regular partial water changes should be considered mandatory. As with many other of the driftwood type catfishes ample hiding places should be provided. In their natural habitat this species uses the nooks and crannies of submerged wood as hiding places and they will do the same in aquaria. I personally prefer to use lengths of PVC pipe to serve as hiding places for this species. Due to their long, but thin shape, I would suggest sections of pipe in lengths of eight to 12 inches and with an internal diameter of one ½ to two inches. This species is quite social and more than a few individuals can work their way into such a pipe. In fact, that is where they will be spending a great amount of their time! Once they are set in a tank they will come out to feed even under decently lit conditions. But, once the food is gone, they tend to rapidly return to their "home". Even better for observing them, especially their unusual anguilliform (eel-like) swimming manner, is to use very low light conditions (or even red light). Under low light conditions (the kind that your eyes take a little while to adjust to), T. taeniatus will leave their hiding place(s) and move more-or-less in midwater around the tank. Some favourite food added to the tank will only enhance this behaviour.

Feeding this species presents no problems. They take well to just about any prepared food and will feed at all levels of the tank, including from the surface. "Meaty" foods should also be used in live, frozen or freeze-dried form. Such foods can include krill, blackworms, brine shrimp and bloodworms. The latter, which like with most auchenipterids, is probably a natural food for them and are especially appreciated.

In keeping with the family Auchenipteridae, sexual dimorphism exists in this species. In males, two main features are noted: 1) Anal fin modification - In males the last unbranched ray and the two branched rays following it are elongated and thickened forming a sperm delivering "pseudopenis" designed for internal fertilization; and 2) Dorsal fin modification - The dorsal fin, which as noted, is quite small to begin with, is longer than that of the female in adult individuals. Males also have serrations on the posterior part of the dorsal spine which are lacking in females, but these can be difficult to observe on living specimens.

To date, I am unaware of any successful aquarium spawning of this species. I did have one batch of about 100 eggs produced, but these were very small (circa 1.5 mm) and did not show any signs of developing. Considering the size of fertilized eggs of much smaller auchenipterids (pers. observation and literature reports) it was obvious to me that the eggs were, for whatever reason, ejected in an unfertilized condition.

I am currently without any holdings on this species. But, it is high (if not at the top) of my list of auchenipterids to re-acquire. Hopefully, a successful spawning report will follow at some later date.

An ending note on a common name for this species: I would personally favour the use of "striped woodcat". The name "mandube cat" has been used, but often this is also applied to a number of different auchenipterids species in commercial shipments. In the first ever shipment of "mandube cats" that I received years ago, there were at least three other species of auchenipterids in addition to the T. taeniatus.