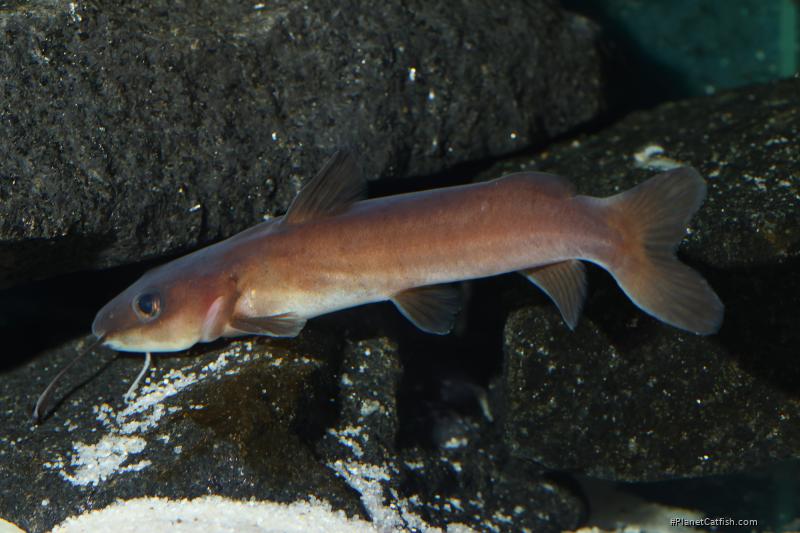 Our catfish of the month for March 2008 sees another forum regular contributing their first article into this section. I'll leave it then to Birger Kamprath to introduce this small mouthbrooding predatory catfish, which, in his words, makes you think, "how intriguing is that?"

Oftentimes you will hear of someone expressing interest for a catfish of manageable size, one that can be bred and has an interesting shape and behavior, Phylonemus typus is one that fits the criteria. It is a small torpedo shaped mouthbrooder and a very capable predator.

Africa’s Lake Tanganyika is commonly associated with the Synodontis or cichlids that call it their home, but it also brings us Phylonemus typus, a member of the catfish family Claroteidae described by Boulenger (1906). P. typus is one of two species of endemic Phylonemus currently identified from the lake with the possibility there may be more yet to be described. It is not a flashy species but has a nice copper tone to its reddish brown body with a creamy underside. Only reaching lengths up to 90 mm SL (3.5 in.) makes it a manageable size for maintaining in a group. Its body is well streamlined yet it has a deceivingly large mouth (see figure 1) well suited to engulf its intended prey of insect larva and small fish. A noticeable feature is the long maxillary barbels that are flattened at the ends resulting in its common name of Spatula barbeld Catfish.

Water conditions should be as for most fish from Lake Tanganyika, mine are kept at 24 degrees centigrade (74°F) with a ph of 8.6. In their natural habitat, they frequent littoral (near shore) rock rubble and to approximate this; I started with a layer of sand. On it I placed many 100mm (4 in.) flowerpot bases turned upside down with a piece cut out of the sides. Over these, I laid random pieces of slate and hid them with a layer or two of river rock 5-15 cm (2-6 in.) diameter. A space is kept between the front glass and the stones leaving a stretch of open sand. This may seem like a lot of extra rock-work but it provides many dwellings deep within the substrate, crucial to their well being. With the extra cover they can be seen calmly cruising among the many passages between the stones, even during the day time. What will generally cause the most damage to these fish are fights that break out for choice hiding spots; these can become very serious battles. The rock-work will help to minimize this fighting.

As for other occupants, I would be wary of fish that will target the long barbels or would compete for defended space in the lowest levels of the aquarium such as territorial rock or shell dwelling cichlids. Ideal tankmates would spend a good portion of their time in the upper levels. One should always keep in mind the predatory nature of these fish. I have heard a few stories where people purchased young Cyprichromis as tank mates, only to have them disappear overnight. This is when the true nature of P. typus as a predator is recognized; even a 2 cm (1 in.) fish is in mortal danger. Phylonemus typus has cohabited with Synodontis lucipinnis and S. grandiops in these rock structures with no apparent problems. Possibly because the Synodontis will swim higher among the layers of stone and each species can go about their own business. Aggressive feeders should be avoided, food needs to reach the lowest levels and adequate time must be given for them to realize that food is available especially if they are nestled in their comfy cave. As long as food reaches them, feeding is not difficult. I have them living and breeding on a diet of frozen bloodworms and NLS pellets alternated daily. Occasionally I supplement with live food provided by a pair of Central American Cichlids.

Phylonemus typus is a biparental mouthbrooder. This means that incubation and hatching of the eggs are done within the mouths of one or both of the parents. For breeding purposes, I like to use a larger group (6 or more) as opposed to a single pair. I have found when they are not interested in spawning the pairs may separate and you need to make sure they can get far enough away from each other or serious damage will occur. With a larger group however, aggression is spread and couples can form when they choose. Two fish paired together in a cave is a good indicator that they are considering breeding or have already done so. If a spawn has taken place, the distended buccal pouch will be visible, that is, if you can see them. A properly constructed residence will have the entrance completely sealed off (see figure 2). It may take a couple of tries to get to this point but if not disturbed they make good parents. Within the first month and still in quarantine, I was taken by surprise by the first broods when all I had for their feed was minced bloodworm. I had such good results (no losses) that I continued to use this as a first food. By dropping it right over them and as they become older alternating with NLS .5 mm growth food feeding young is not difficult. They are not shy eaters. One time while giving a group of fry their first feeding I watched as two devoured a whole bloodworm one at each end until they were nose to nose. It was their constant twisting and turning that finally broke it in two.

A problem for this fish is that they are not very noticeable when first observed in an LFS. The owner of the store, where mine were purchased, told me he would not bring them in again saying “no one knew what they were”. This is a shame because they are a very interesting addition to an aquarium of fish from Lake Tanganyika.