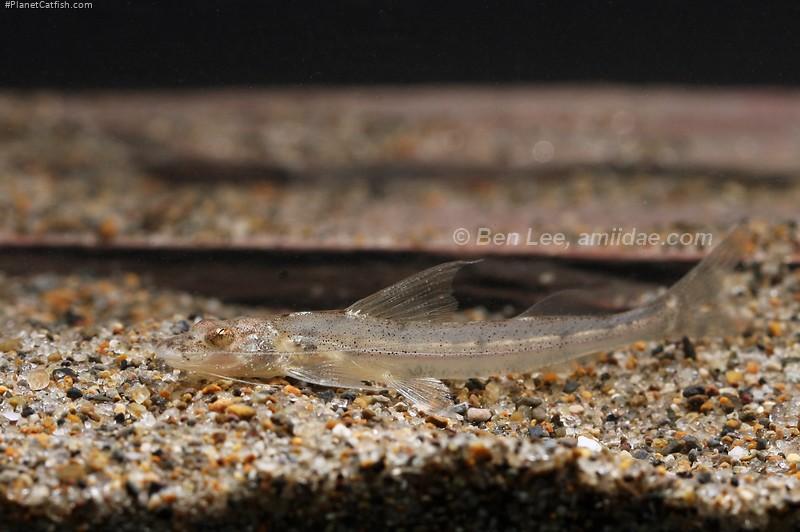 As something of a collector's item, CorydorasWorld.com supremo Ian Fuller introduces a fascinating little catfish that ins't a Cory - or even close!

This little Catfish excited me the second I first saw it whilst unpacking a shipment of fish that had arrived from southern Colombia. Its diminutive size and delicate looks were something that appealed to me straight away. There were only nine fish in the bag, and all of them were around the same size at 45 to 50 millimeters standard length. They also looked to be fully mature specimens, something that also appealed to me, as I do have an affinity with small fishes and these would certainly fit into my fish house set up.

The group were immediately put into a small quarantine tank to be checked out for a few days to make sure there were free of parasites and feeding well before heading to my fish house. In the quarantine tank they acted like most bottom dwelling catfish finding the darkest area to congregate in, only becoming active when food was introduced. Looking at the slender elongate body shape and the broad mouth they looked to be a typical ambush predator, but at that size the foods that seemed to fit the bill were Daphnia, glass worm, blood worm, which they took to straight away. They were also offered small manufactures sinking granular foods, which they also took to without any hesitation and were soon swimming around with their bellies full and well distended.

After ten days or so I decided they in the clear in regard to carrying any unwanted guests and decided it was time to take them home. I did spend a long time trying to decipher any sexual dimorphic characters, but I could not see anything distinctive at all, so in good old cory fashion I selected three fat ones and three thin ones and took them home. The quarantine tank was plain bottomed, but the tank that I put aside for them in may fish house has a substrate of fine sand about a centimeter deep, a perfect choice as it happened, because after a period of acclimatization, the first thing they did once being released from the bag was to dive straight into the sand and out of sight. It was two days before I saw any of them again, and if startled they would dive for cover.

The exact collection location for this group is not known at this time. They were shipped from Bogota, Colombia, but that is no real indication of their actual distribution. A little research shows that they are fairly wide spread, from Eastern Colombia, Venezuela, (Rio Orinoco basin), Brazil, (upper Rio Amazon tributaries) and Guyana. There are no known breeding accounts for this species, but I will be keeping a very close watch on my group and making notes of their activities.