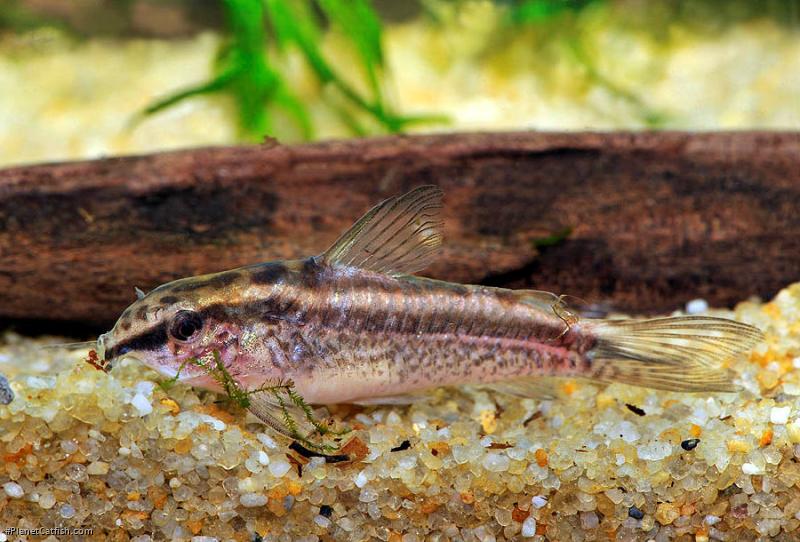 Ahead of his visit to the UK in 2012 to present a talk at the Catfish Study Group convention in March, accomplished American fish breeder Eric Bodrock introduces an unusual Corydoras that he is, rightfully, proud of keeping and spawning.

Overview
Corydoras gracilis is an attractive, oddly coloured and patterned Corydoras. It is rarely seen and thus kept in the hobby and spawned by even fewer. They are a smaller sized Cory, reaching a maximum total length of about 2” (5 cm), and they could easily be confused with an Aspidoras due to their size and body structure. Noticeably a shy fish, they need plenty of hiding places for security. Adults and young adult present no special problems in regards to care & maintenance. Spawning is reviewed below.

Conditioning
I brought back a group of young adult fish from a breeder in Germany in May of 2008. He was maintaining and spawning them in an aquarium that measured approximately 24” x 24” x 24” (61cm x 61cm x 61cm), roughly 60 US gallons. His colony set up consisted of dozens of adults along with juveniles and fry of all sizes. I took some photos and made some mental notes so that I could try to replicate his set up. They travelled well from Germany to the USA, not even showing the slightest signs of stress. I placed the ten fish into a standard 10 gallon aquarium (25.4cm x 50.8cm x 30.4cm); a thin layer of natural creek sand covered the bottom. A rock formation that allowed the fish something to hide under was built in the middle of the tank. A clump of Java moss, a small Anubias and a few oak leaves were added. After soaking for a few days, the oak leaves sank to the bottom. A piece of driftwood was also added to complete the same layout as the tank they came from in Germany. Water was 95% R/O water and the rest treated tap water, temperature in the mid to upper 70°F (21.1°C) range. Diet consisted mainly of live blackworms, supplemented with frozen bloodworms, daphnia, freeze-dried tubifex worms and Sera® Viformo tablet food. A single sponge filter, with high airflow, did the filtering. Water changes of 30% were done weekly with water of the same parameters.

When I initially set them up, it was simply to finish growing them out, but after about six months I noticed the females' bellies starting to fill out with eggs. At that point, I started to do my water changes with straight R/O water and added a small amount of a liquid “blackwater” treatment. In addition, I added a good-sized handful of oak leaf litter and stepped up the amount of blackworms I was feeding. I've said it many times before, and I'm going to say it again, blackworms are the BEST food for conditioning Corys to spawn.

Several months passed without any spawns and the females still looked heavy and ready to go. I decided to change the water chemistry up a bit and see if I could trigger them to spawn. I started to do 50% weekly changes with water that was a mix of 80% R/O and 20% treated tap water. I also stopped adding the blackwater treatment during the change. It only took a couple of water changes to make something happen because they finally began to spawn! The following are some notes that I took as I found early spawns.

First Spawn
Saturday, March 14, 2009, first eggs seen early morning, a few on the glass and rocks, most of them found on the underside of oak leaves that laid on the bottom of the tank. Eggs were removed and divided up into several smaller containers for hatching. Later that day more eggs were found around 7 PM and they were placed into a separate hatching container. While removing these eggs, I found a single fry swimming in the tank that was already a centimetre long - I must have missed a previous spawn! First eggs found Saturday morning started to hatch on Sunday night, March 15, not sure how long they were in the tank before I found them so not sure how long it took for them to hatch; their tank was located on the bottom row of the rack where not much close observation was given. Water was 70°F (21.1°C), pH 5.6 and TDS of 65ppm. Spawn was large, numbering around 300.

Second spawn
Sunday, March 22, 2009, eggs hatched on the 25th. Water conditions about the same as the first spawn, tank was only topped off to replace the water which was removed and used to hatch the first batch of eggs in.

Third Spawn
April 10, 2009. Water was 74°F (23.3°C), pH 4.7 and TDS of 215 ppm. Spawn took place during the daylight hours between 8:30 AM and 3 PM. Large number of eggs were deposited everywhere, glass, rocks, underside of oak leaves, I would guess somewhere in the neighbourhood of 300 eggs or more! Eggs hatched by the evening of April 13, feeding of APR, “sponge scrunge” (the contents of a squeezed sponge filter) and microworms were started the following night.

Fourth Spawn
This took place several weeks later, temperature was 74°F (23.3°C), the pH 4.6 and a TDS reading of 156 ppm was recorded. After this fourth time, spawning ceased for several months.

About the Eggs & Fry
In each of the first four spawns, the hatch rate was about the same at approximately 40-50%. Eggs were always removed and placed into a smaller container or multiple containers for hatching. The eggs are mostly deposited in clusters, or at least touching one another, and most commonly under an oak leaf or Anubias leaf. Methylene blue was used at times and Alder cones were always used to help reduce the spread of fungus. Eggs are very, very adhesive when deposited. I have noticed that the fry do not do well in warmer water, it is best to keep them in the 66°F (18.8°C) to 72°F (22.2°C) range. As mentioned above, APR, “sponge scrunge” and microworms are first foods offered. Assorted crushed flakes and live baby brine shrimp are added to their diet within several days. They seem to do well on this diet and grow nicely. I do often have trouble with fry at about 4-6 weeks of age. They seem to thin out and show signs of stress, namely clamped fins and dark colour. Not unusual to lose a good number of the young at this point. Even to this day, I have not found out the reason for this and still continue to try and resolve the problem.

Concerning spawning
Since their initial spawn in 2009, I have had multiple spawns since (as recent as Nov, 2011), usually with a 5-6 month period between “sets” of spawns. I say “sets” referring to when they are actively spawning. They will spawn about every 10 to 20 days for a month or two then stop. I have not found a reason related to outside/inside conditions, temperature, season, diet, etc. for this. I am confident to say they always spawn in the daylight hours too! They will spawn at a higher pH, but the eggs are rarely, if ever, viable; the pH needs to be low. I don't believe I have ever had a spawn occur with a water temperature over 74°F (23.3°C), so safe to say keep them on the cooler side.

Remarks:
Corydoras gracilis are very rarely seen in the hobby, just not here in the USA, but anywhere in the world. Probably my most rewarding of any of the Corydoradinae catfish I have spawned to date.