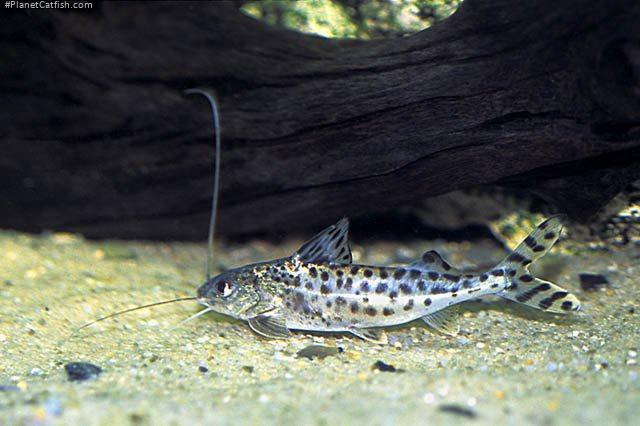 Moving catfish can be a tricky business. Most have spiny rays leading their dorsal (top) or pectoral (shoulder) fins. These rays can get entangled and as a result the fish become difficult to separate from the net. Pimpictus, along with the Doradiids (Talking Catfish) and Synodontis are major culprits when it comes to net destruction. Personally I find the best way to deal with this is to put the captured catfish and net into the intended destination, put out the lights and let the fish disengage itself. This seems to work well, but if after an hour or so the fish is still stuck then a pair of scissors will do the job at the cost of a net.

The Pim Pictus seems to be more susceptible to White Spot (Ich) than many other catfish. Make sure when you are purchasing this fish that it and its tankmates are entirely free of White Spot and that they are well fed. This fish is easy to feed, but often they are imported in an underfed state and never fully recover from this.

The fish swims gracefully yet will become almost hyperactive at feeding time. As you can see below a large shoal is quite a sight! Two colour forms appear for sale. The first, Peruvian, variety has large "dalmation" style spots all over its body with smaller spots around the head. The other, Colombian, variety (which reportedly grows larger) has many more spots that are smaller, less clearly defined and almost pin-prick size on the fish's head. This differentation should only be used when comparing fish of a similar size as both patterns change with age. Although the beautiful colouration changes with age, older fish have the same brilliant blue-silver colour and graceful appearance.