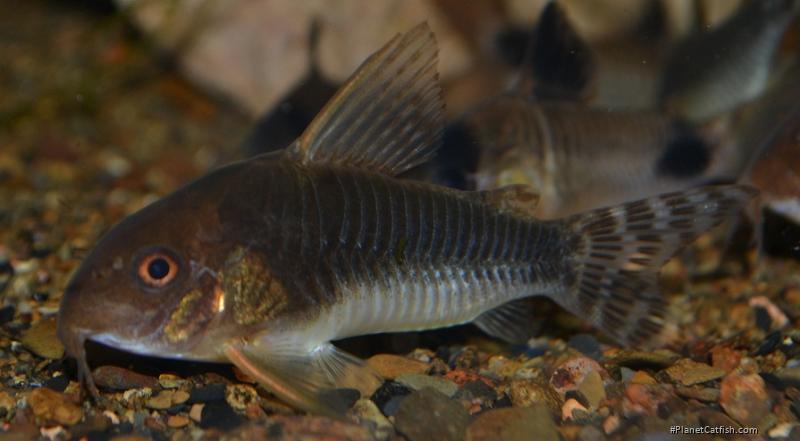 Eric Bodrock is a one of America’s leading fish breeders and responsible for the distribution of many rare or unusual freshwater fish species as captive bred youngsters across that nation. In the catfish world, readers will note his account of spawning Synodontis schoutendeni elsewhere on this site. Eric has something of a knack with Corydoras, and a definate soft spot for these compact catfish. This month, Eric explains (and hopefully finally puts to bed) a case of mistaken identity stretching back nearly two decades. Writing earlier this year, Eric sets the record straight on a very understandable chain of events.

In 1995, I received my group of 14 adult fish from a single shipment of about 60 wild fish. They were labeled Corydoras gossei and imported into the USA through Adolfo Schwartz to White's Fish Farm in Mogadore, Ohio. Of the 14 fish, 11 of them looked the same, as in having a solid dull brown (milk chocolate brown) color on the upper portion of their body with a dull white underside. I assumed that these, since they were the majority, were C. gossei and I kept separate from the others. I assumed the other three in the group were contaminants or by-catches as they are sometimes called. These contaminants differ in that they show a base body pattern of spots which lays under a brown and shiny iridescent body color of yellow/gold; most obvious on their sides. Also easily seen in these adults is a light colored, rough stripe that runs over the ridge of their backs from the back of the dorsal fin to the base of the caudal fin. Again, these 3 were obviously different than the majority of the group and kept by themselves. In discussions with Ingo Seidel back in 2000, when he first saw these fish at my place, a theory was drawn that these may be a short nosed variant of C. seussi, possibly found in slower moving waters. The coloration and markings of these contaminants show a strong resemblance to C. seussi, which are found close together with C. gossei in the wild near Guajar-Mirim, Rondôndia, Brazil. I began calling these contaminants “Short-nose seussi”. Keep in mind, that all the above mentioned fish, at the time, were not often seen by hobbyists.

In 1996, just a year after receiving the fish, my group of so called C. gossei began spawning and by the year 2000, when Ingo saw them, I had already produced and distributed hundreds upon hundreds of them into the hobby in the USA (and I still have that same bloodline spawning to this day!). In March of 2003, the group of 3 contaminants (“Short-nose seussi”) began to spawn, producing 8 spawns over a period of a few years (and one single spawn several years later). With hatch rate being low with them, I was only able to release several dozen of them into the hands of other hobbyists. The spawning methods and fry development of the two species are considerably different from one another, supporting my theory that these are in fact 2 separate species. In addition, I was able to observe a recent shipment of a dozen imported wild young adult fish labeled from shipper as Corydoras gossei. These fish were housed in a decorated aquarium. Of the dozen fish, 5 had obvious spotted bodies and the rest were basically solid colored, (the same observation that was noticed in my original group) and I was excited to watch the fish moving about- they stayed in separate groups, indicating to me that they know they are different species! After finally acquiring a copy of Nijssen’s original writings of a new Corydoras species, C. gossei in 1991 and with much help from Ian Fuller, it looks to be that the fish I have been spawning regularly since 1996 is in fact an undescribed (and unrecognized) species. Ian has now recognized as Corydoras sp. CW069. All this time, what I thought were the contaminants, were the real Corydoras gossei and they have proven to be a much more difficult fish to spawn!

Looking back at my history with these fish, I feel bad that I had distributed so many fish under the assumption of another name, but I simply didn’t have the resources to verify what I actually had and much to my surprise nobody else had ever thought to question the possibility of dealing with multiple species.