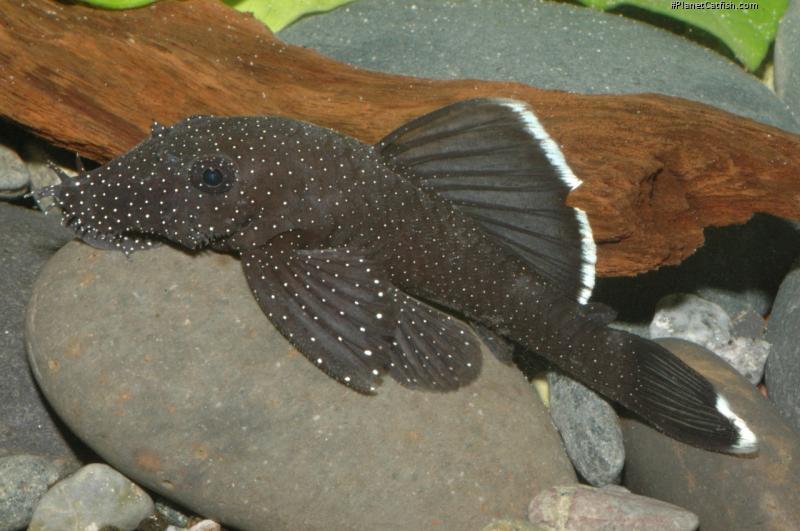 What would you do with a time machine? Once I'd seen some dinosaurs, been to 01/01/01 and probably debunked a few conspiracy theories, I might like to travel to the discovery time and place of the then new catfish species and actually have a look at the specimens as they came out the water. Thinking about it, I'd probably need an invisibility cloak while I was at it — otherwise I suspect I'd stick out a bit. Given these flights of fancy, I might also (and this, even for me, is much further down the bucket list) visit the offices of a few American and German ornamental fishkeeping publishing empires and suggest different names for some fishes that they were writing about for the first time.

Or not even the first time.

Much has been made about the repeated misidentification of Ancistrus dolichopterus in the German hobby literature. I found this confusing and was not familiar with the Ancistrus hoplogenys misidentification introduced therein. Not because one fish was being mistakenly called another — that happens all the time — but because I was already familiar with it and using the right name. The UK (and, I think, US) fish press never made this mistake and so were a touch confused by all the fuss trying to correct the error. That is, except those that followed the error and some did. So, mostly, the Dolly Pleco, as it was sold locally to me in 1980s Scotland, was always A. dolichopterus. That common name however died with the advent of globalisation and the English transaltion of the German common name, starlight pleco, has won out.

Fortunately, and without the use of a time machine, the historical identification error has been corrected in recent publications and on the internet. Yet, with we've seen a lot of black with white spotted plecos and several of them are Ancistrus. Again, identifying A. dolichopterus is now known to be simple; this species is the only such coloured species that has 9 soft rays (excluding the leading thicker hard dorsal ray) up top in the dorsal. Less precise, but it is also useful to know, that the white seam has a bluish sheen; other species have pure white with no tint.

Despite being given the L-number L183 in 1994 (in an article featuring five black with white spots Ancistrus) this was both already a well-known species and was described by the Austrian Kner in 1854 in, again, a German language publication. The export trade route pioneered by the commercial value of the cardinal tetra from the Rio Negro river system was and is also the conduit for the supply of these fishes to the hobby. They, like the red and neon blue tetra are numerous and widespread in this, the largest blackwater river on the planet. The Rio Negro is a nutrient-deprived, typically plantless habitat with a pH from 3.5 to 6 and temperature range of 26°C to a decidedly warm 31°C.

However, it is the soft, acidic water that is the key to maintaining the species in the home aquaria. Get this right and it is straightforward to feed these omnivorous fishes and thus raise them to a breedable size. They are seasonally available and not too expensive and so are always sought-after species, as are captive bred youngsters, which have the advantage of tending towards increased hardiness.

This is a pretty pleco. I especially like the border of flesh around the deep blue eye. It is spotted with pinprick white spots like the rest of the fish but the spots move with the eye. Its similarly spotted head tentacles give it a mesmeric look. Not a fish that needs major water current, and not a large pleco: there are few reasons it shouldn't grace any soft water set-up.