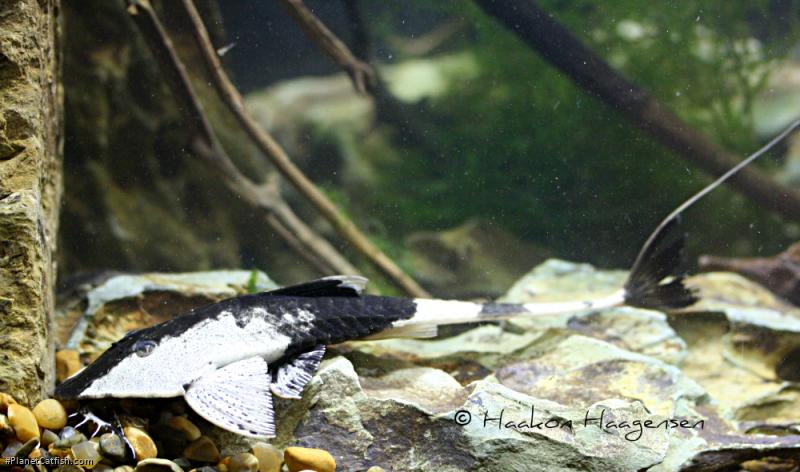 A couple of years back I found myself swimming in the Rio Xingu with Oliver Lucanus. For those who know Oliver, this does not need much explanation. For those that do not, then your are talking about someone from my generation of fishkeepers who is close on three decades of travelling around South America and Africa photographing and collecting fish. The short article below was written nearly 20 years ago about a fish we discussed while floating in the warm clear waters of the Xingu. And, as it turns out, we are stiling finding out new things about it - for now I will let Oliver explain how these fishes are collected.

The confluence of the Rio Itaya and the Amazon mainstream is not far south from Iquitos in Peru, so it is one of the rivers that is easy to collect in a day trip from the city. About four hours by boat upstream the muddy banks give way to some beaches at Pena Blanca. At night fishermen collect Paratrygon aiereba and Potamotrygon motoro on this stretch of the river. Both of these stingrays have become popular in the aquarium trade and there are several teams of fishermen at work on any given night, except full moon when the added light makes catching stingrays impossible. The water is typical whitewater with a pH of 7.2, 27°C and soft. Seeing your hand just six inches below the surface is difficult. The fishermen catch rays with a large beach seine held at the ends and centre with six-foot wooden poles. All of them wear rubber boots to protect themselves against the feared barbs of the stingrays. The Rio Itaya's banks are teeming with mosquitoes and catching rays is not always easy, so the fishermen get between 2-12 rays in a night.

This night is a lucky one and we have 8 aiereba and one motoro after just thee hauls. Also in the net are large numbers of the Prochilodus and Curimata type characins that are commonly found over sandy bottom. There some young Crenicichla lugubris, plenty of Biotodoma and countless grey Pimelodus and Calophysus catfishes. Nearly all the other fish are of no interest to the aquarium market and the fishermen return them to the water. Only the rays and Biotodoma are lined up on the beach in shallow vats.

Later, at dawn, the fishermen begin to fish another area at the end of the beach where the low water levels have caused a small lake to form, connected to the main stream by a narrow channel. The lake's bottom can be seen in the somewhat clearer water. The bottom is covered in leaf litter from the surrounding forest. Here the fishermen look for the fish they call "Loricaria chameleon". According to the fishermen, the species is rare and in fact most of the sand dwelling loricariids they catch here are the more common round headed Planiloricaria. After three hauls with the net there is much celebration when the fishermen capture the first Pseudohemiodon. About six inches in length the fish has a dark black body and white tail. By the time the fish is taken out of the net, placed in a shallow tub and carried over to the beach it has changed colour. In less than two minutes the fish has turned completely black. In fact, each specimen caught in the lagoon (we would catch six this night) exhibits a different pattern of white and black and has turned completely black within minutes after capture. One fish is even carrying a bundle of eggs in its mouth! The fishermen are less excited than I am about their find saying that the stingray collecting pays much better and even though they have known about the fish for years it is rarely collected, for this reason. Pseudohemidon turn out to be less sensitive than other sand dwelling loricariinae and none of the animals die of "red stomach" - the haemorrhaging disease that kills many newly collected sand dwellers even before they are shipped abroad. Now eight healthy fish have moved into an empty 180 gallon tank waiting for me to add sand so they can change to new colours - it seems the bare glass stresses the animals, which are all solid black.