The last catfish of the month in this millennium was also the first new Corydoras of the 1980's. As we approach the much heralded "Y2K" I though it appropriate to feature a fish both currently available (although still expensive) yet also largely undocumented. Our new millennium will hopefully see a reversal in both situations.

In Greek mythology Narcissus (or Narkissos in Greek) was the son of the river god Kephissus. He was a beautiful youth who rejected all admirers (including the gorgeous nymph Echo) and fell in love with his reflection in a pool. After much myth and fable he was finally transformed into the flower that bears his name. Today we now know these as daffodils which, you may have noticed, are always looking downwards - like Narcissus into the reflection of his pool. From this legend comes the term narcissism, meaning exclusive love of self. Psychoanalytic theory considers narcissism a normal phase of childhood yet suggests that remnants of this phase in adulthood may be a factor in some neuroses.

How this name and the various implications thereof meant that it was chosen for this species is one of those pieces of modern aquatic legend that is always interesting to attempt to unravel. Many people have many answers to this question usually blaming assorted "characters" in the hobby or prominent figures of one sort or another. The story goes like this. In 1976 a group of collectors (H. R. Axelrod, H. Bleher, G. van den Bossche, J. Gery and A. Schwartz none the less) captured a number of then undescribed catfishes. Unfortunately somebody began referring to one of these species as C. bleheri, a name which appeared in a subsequent magazine article about the trip and quickly caught on in various wholesalers. On the positive side, a sample of these fish were later sent to Nijssen & Isbrücker (two leading scientists in the field of South American catfish icthyology) apparently with at least a strong request to name them after one of the aforementioned collectors. In 1980 they were described as C. narcissus and within that paper read "Etymology - Corydoras narcissus is named after Narcissus, son of the Greek river god Kephissus, in honour or those who recently collected undescribed Corydoras species, and kindly suggested new names for them.".. So, tongue set firmly in cheek, they were named after the collector, generally if not specifically!

Many a Corydoras specialist lists this fish as one of the most beautiful of the genus - it is my (probably) favourite - because of it's character and large striking appearance. On the subject of appearance, you will notice that in the picture above the fish has a stripe running from below its eye to it's snout. The picture below shows fish without this feature, with my C. narcissus this appears to change with mood. 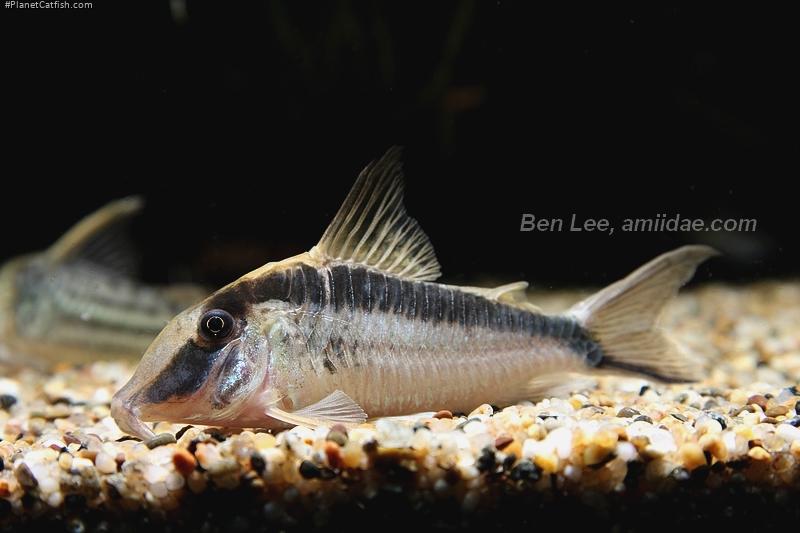 Such a large, enigmatic and boldly marked fish without a doubt makes for a striking shoal, but be careful. This species, along with a number of the other long-nosed Corydoras, can exhibit surprising aggression amongst themselves. Males often fight each other and care should be taken to keep a much higher percentage of females to males. I kept a shoal of 6 (2 males and 4 females) in a roomy 48x18x18" aquarium and the smaller, weaker male was harried to an early death. The remaining 5 fish are now in a less expansive 36x12x12" aquarium and doing very well. There are however active in a way you would more associate with armoured catfish (Megalechis spp. etc.) than with the more demure Corydoras stereotype.