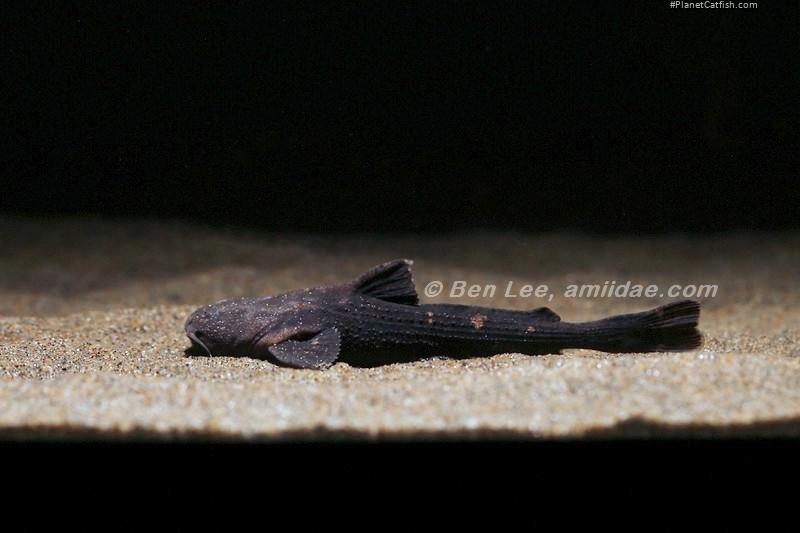 We are delighted to present the first in an occasional series of Catfish of the Month articles by Heok Hee Ng. Heok Hee is currently completing his doctoral dissertation in ichthyology, but he has already emerged as a leading authority on siluriform systematics and taxonomy.

Marine aquarists have their live rocks and freshwater aquarists have their "live driftwood", which is the subject of this month's review. Looking very much like a piece of driftwood, Acrochordonichthys rugosus (the Asian banjo cat) is one of the most lethargic of catfishes. The fish spends all of its time lying on the substrate, sometimes out in the open (one fish I kept stayed at the exact spot in the corner of the tank for two weeks), and even looking for food seems to be an onerous task that the fish would happily forego. Catching an Asian banjo is as simple as picking it out of the water (the fish will not put up much of a struggle). Release it, and it will make no attempt to swim, drifting with the current until hitting the bottom.

The Asian banjo bears an uncanny resemblance to the real banjo catfishes (family Aspredinidae) of South America, and this resemblance is not simply due to convergence, as a close relationship between akysids and aspredinids has been shown in recent studies. Like the banjo cats, Acrochordonichthys occasionally molts and sheds its old skin (during this process, the old skin peels off in large patches, which are usually promptly gobbled up by hungry tankmates), although the reasons for doing so are not clear. There is a conspicuous axillary pore at the base of each pectoral spine, which produces a milky-coloured substance when the fish is greatly disturbed. This mucus is poisonous to other fishes and personal experience has shown that it is capable of killing other fishes in the vicinity within seconds. Out in the field, we learnt very quickly to bag Asian banjos we caught separately, as the very predictable outcome of placing a highly stressed fish into a bag of other fish left us with a still very stressed catfish in a bag full of dead fish. On another occasion, a large Asian banjo I kept decided to die and take out my entire tank with it in a massive apocalyptic fit (note to self: do not keep Asian banjos in the same tanks as my prize fish).

Acrochordonichthys species are difficult to identify due to the great variability shown in color and many other external characters. A recent revision by Ng & Ng (2001) recognized nine species. The species most commonly encountered in the aquarium trade is A. rugosus, as many of these imports hail from southern Thailand (where only one species occurs). They readily feed on bloodworms in the aquarium, although their lethargy means that the only possible way to ensure that they get enough food is to drop the food right in front of their mouths. In the wild, Asian banjos are ambush predators and a large (ca. 100 mm SL) specimen captured in northern Peninsular Malaysia regurgitated three loaches (Nemacheilus) and a catfish (Glyptothorax).

In the wild, Asian banjos are found only in clear, swiftly flowing forested streams with sandy or rocky bottoms, the fish preferring to rest against tree stumps and fallen logs in deeper parts of the stream. As such, the fish is not easy to catch with nets, although the aquarium collectors in southern Thailand catch large numbers by simply sinking lengths of hollow bamboo rods into the river bed and harvesting the fish from within the rods a few days later.

Its gill openings include an unusual spout-like structure found immediately below the base of the pectoral fin. The water leaving the gills is apparently channeled through this spout, and the fish may be able to use this to jet-propel itself through the water in the same manner as aspredinids.

With the personality of a rock and fairly demanding needs, this occasional import is not for the beginner. Most aquarists are not enamored of keeping a fish that barely moves and has the potential to wipe out the entire tank in seconds, but the Asian banjo certainly possesses enough interesting traits to make it a worthwhile addition to the catfish enthusiast's tank.