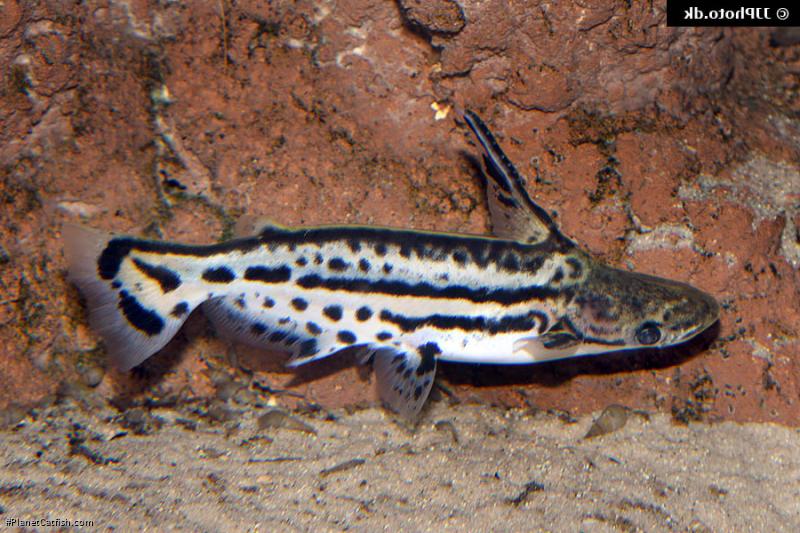 There are many woodcats that look like wood: there are even a few that act like wood. However, consistent with all catfishes and their amazing diversity, there are also woodcats (or Auchenipterids, to use the family name) that are active, engaging and great-looking, too. I normally write Catfish of the Month articles about species that I have kept, but for this one, for sure, I can make an exception.

Having not kept this species, and only a handful of its congeners, I have only three things to tell you about it. The first is how a lady helped me collect it in the wild, the second is how a lady corrected my pronunciation of its name, and the last is the story from a lady who put down the first real marker on how to keep these fishes and their intriguing shapeshifting habits.

First, we travel to the Venezuelan Llanos, I went there for the first time in 2001. In the dry season, large parts of the Orinoco drainage dry up or contract to form disconnected bodies of water. Some only a few meters across, some lake-like in size. Irrespective of size, they are all reduced from the wet season, with the result that all the fishes, their prey and predators, are condensed for a time into a much smaller space. It gets choppy.

It is also the perfect time to sample these aquatic cul-de-sacs and many fishes can be found. Among the commonly encountered weird knifefishes and silver characins, Corydoras and Plecos are here in great numbers and diversity, respectively. If you're lucky, you can turn up more uncommonly found fishes. Having just pulled up a seine net with no less than seven different L-numbers in it, I was surprised to hear the suggestion from Clare, my wife, to try sampling the open water. The pool we were in was about 50m² and the banks had been great for Corys and the driftwood snags excellent for all those plecos I mentioned. However, nothing ventured nothing gained nor learned.

After a few pulls of the seine, we collected a few Hypophthalmus catfish (already this was a first for me) but then we pulled up a single Ageneiosus magoi. It was a beautiful one too, its fins golden and its flanks a high contrast pattern of white with a half line of big black spots. Recognising we would not be able to keep a fish this size or physiology alive for long enough to keep it, we took photos and returned it to the pool. A fish I'd never have seen if I'd not listened to Clare's different point of view.

The second part of this tale concerns a different type of adventure. This type involves a lot of pizza, beer and staying up extremely late indeed and mostly talking about catfishes. Following the decades-long success of the Catfish Study Group's annual convention in northern England, our American fishkeeping friends decided to get in on the act. So, the Potomac Valley Aquarium Society created the "All Aquarium Catfish Convention" or catfishcon for short! I was delighted to be asked to speak at the first one in 2004 and so the story of my collecting A. magoi was told again.

Giving talks to large groups on topics I understand is something I don't particularly look forward to but really enjoy once I get going. However, when it's the catfish hardcore, you need to be prepped, practised and know your stuff. Umming and erring your way through endless bullet points on slides while telling those still concious things they already know won't cut it. Moreover, in the audience were the other speakers and many of the catfish experts of my and previous generations - heroes from my early fishkeeping years, that kind of thing - no pressure! Sitting right at the front were Professors Marilyn and Stanley Weitzman. That's 150+ years of expertise right there.

I get to showing Ageneious magoi which I pronounce as 'ma-goy'. To Stanley Weitzman's tiniest consternation, Marilyn Weitzman corrected my pronunciation to be 'ma-go-eye'. Having personally known Francisco Mago-Leccia for whom this species was named (and who had recently just died) this was of course a fair correction to make. Whilst I wish I was quick enough to seek parity from the many of us aquarists mispronouncing more common species like adolfoi or sterbai, I was not so quick witted. I quickly thanked the professor for her correction and stumbled on. Although a minor point, a few hours later I was still crushed. It bothers me to this day that I made that mistake, but thankfully, much less so now. In jest, I have even given up trying to correct someone pronouncing sterbai as ster-bye.

Much more interesting for me, and from that first catfish convention, I got to meet the first lady of aquarium catfishes, one Ginny Eckstein. To my regret, we didn't have a long time to chat but at least I got to meet her. Although not well known outside of the US, many of her experiences were published in the late 80s and 90s and so just missed out on the internet explosion which broke down geographic and language barriers between catfish fans. In Aquarium Fish Magazine, November 1994, Ginny's article on Ageneious magoi was published alongside some excellent photographs of this 'sensuous catfish'.

The article affords a glimpse into the paucity of resources available to the siluriphile at the time, with only a handful of books available with little more than a few words (or misinformation, which Ginny corrects) on this species. The article is a delight to read: "It is an incongruous reality that tank space and finding rare fish are seldom a harmonious combination" and details how the author purchased a group of at least five individuals and "to begin with" fed them goldfish. However, they readily adapted to aquarium life and prepared foods such as freeze-dried krill.

Ginny had breeding this fish in mind from the start. After six months or so, she reports they began to show sexual dimorphism, particularly around the male's dorsal fin; its serrations, sturdiness and length all increased. They did this in six to eight days, although she noted, amazingly, that the alpha male can do this in just 24 hours. When that fish was removed, the next in line "beefed up". In addition to the anal fin modification common in this family of catfish, the male's barbels changed from inconspicuous to overt and distinctly combed - she was soon to learn the male barbels were used in a forward position to clasp the female. And, finally, all this finery disappeared after reproductive activity ceased, leaving fishes whose only clue to sex discernible by girth. This was to happen twice a year.

Nine months later, Ginny witnessed the reproduction in its entirely, and described it fully. She also noted the subdominant males posturing by flicking the dorsal fin ray from fully back to fully forward, given rise to the common name "Unicorn Catfish". This all went on for around ten days and afterwards the fishes were segregated and did not eat. The females were physically roughed up by the process but recovered quickly. Fry - and their raising - is not documented, but the article stands as a fascinating insight into this species, surely inspiring today's keepers of these fishes to take our knowledge of them and their reproduction in captivity to the next level.

In my view this is a catfish everyone can like, and from which we still have much to learn.