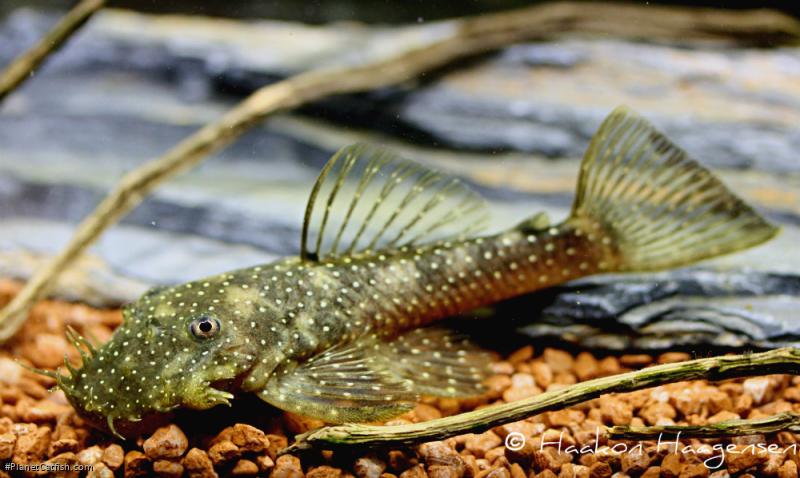 In something of a double-header, we continue to be very happy to have Erlend Bertelsen bring us a great article on one of those black with white spots plecos, a nice Ancistrus indeed as Erlend explains.

In the group of black Ancistrus with white spots, you'll certainly find plenty choice. They're also generally popular in the hobby and there are several reasons for that, they are nice looking, easy to keep and easy to breed. I keep four species of Ancistrus that have this similar look, but they are still all different. These are Ancistrus dolichopterus (L183), Ancistrus sp. L100, Ancistrus sp. L107 and Ancistrus aguaboensis (L032). The first difference is where they come from in South America, but they also have some difference in body structure, adult size, and the number and size of the white spots. Furthermore of course, there are many more differences if we go down a detail level.

One of my personal favourites is Ancistrus aguaboensis or L032. They originate from the upper section of the Rio Tocantins drainage in Brazil and are collected downstream from the hydroelectric dam at Serra Da Measa in a river called the Rio Bonito. The species name also reveals another little detail about where they are collected. In the scientific paper it states, "The name Aguaboensis is derived from Agua Boa, name of the river where the new species was uniquely found". In the wild they live near Ancistrus minutus. However, as far, as I can understand, the hydroelectric dam now separates them. Both fishes have a very depressed body and they don't grow bigger than 8cm in total length.

Ancistrus aguaboensis was described back in 2001 together with Ancistrus minutus. But it got its L-number much earlier in 1989 in an article written by Rainer Stawikowski. In the DATZ article where it is introduced and allocated an L-number, he writes that it was collected in the Rio Araguaia (Rio Tocantins drainage), together with L033 (a Lasiancistrus). He kept the collected specimens and donated them to science. They are now a part of the ichthyological collection of the Bavarian state Museum of Zoology in Munich. Sadly, the preserved fish in Munich didn't form part of the scientific description of the species. That would have been a cool cooperation between the L-number system and the scientific community.

Breeding Ancistrus aguaboensis is straightforward. They are cave breeders as other Ancistrus species. There's more than enough articles and reports regarding that available, so I'll not go into the details here. Only once did I find eggs on the underside of a piece of slate, but that's probably nothing more than a mistake. It's a small species, so the egg clutch is not as big as other Ancistrus. I would say that they normally produce around 20 fry in one batch. Pleasantly, even from a small size, they have a very nice and dark colour with clear white spots. One of the reasons I like them so much is the beautiful colour they have, even when they are fully-grown. Some of my other white-spotted Ancistrus lose the bright and shiny colours as they age. One of the trade-offs to these nice colours is that they are extremely fast to go into "frightened mode". It's impossible to take a nice picture of the fish in a photo tank. If you do anything in the tank, they get stressed and lose their normally nice colours. I greatly enjoy taking pictures of my fish, but this is a hard one to make a fair picture to show the true beauty of the fish.

Ancistrus aguaboensis have been in my aquarium room for some years now, and they have bred many times. I also breed Ancistrus dolichopterus. It surprises me how easy I can sell the fry of the latter species even though they produce more fry and on a more regular basis. Sometimes, I try to explain to some of the buyers that I also have this beautiful, new and not so common Ancistrus aguaboensis. But so many people really don't care, and this surprises me. If it was I who had been asked this question, I would readily consider, and probably take the more uncommon catfish.

Of course, everyone choses for themselves, but please do consider the uncommon or new and not always very well-known fishes. They can give you a big pleasant surprise.