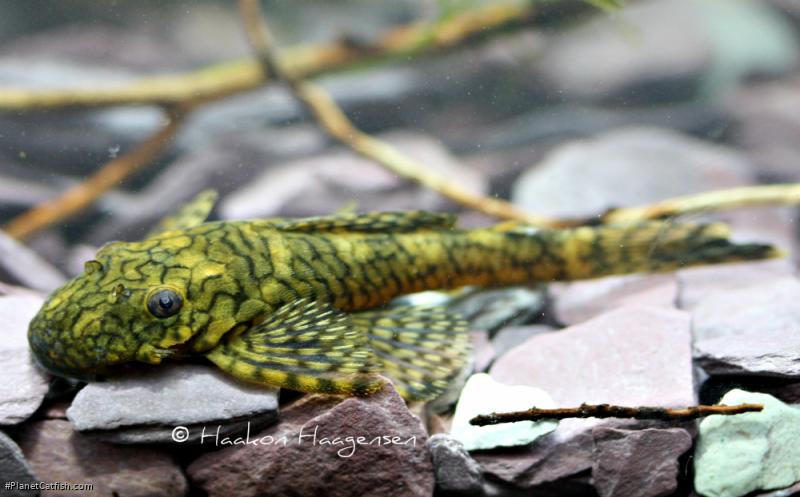 This month's featured catfish is a species from Peru which is has been maintained and bred in the Ukraine by Planet Catfish member, Alexandr Geraskin. While I just like the global nature surrounding the background of this information sharing article, Alexandr was prompted initially to get something down on paper as he could found very little information about this catfish. So, in his words, he'd "like to write about my experience of maintenance and breeding of this Ancistrus"... 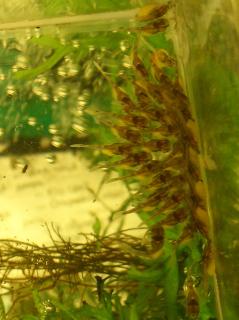 I bought four fish in March 2008, later they were sexed as one female and three males. I put them into 140 litre tank planted with Echinodorus amazonicus, Hygrophila angustifolia and Ceratophyllum demersum. I used gravel, with an grain-size of 4-8 mm as substrate. The neighbours were then Ancistrus cf. dolichopterus less than 5cm in size and six Otocinclus vittatus. The tank housed one 2000 l/h pump with a sponge for filtration. Later I added one more filter (800 l/h). Also I placed plenty of wood in the tank, specifically I used oak (Quercus robur), pussy willow (Salix), birch (Betula), acacia and coconuts. In the birch I made caves for breeding. The size of the caves were 3.5 cm in diameter and 8-10 cm long. The fish were fed with different vegetables, frozen fish and shrimps, spirulina and different dry foods for plecos. In two months I noticed that the female became gravid. The temperature was stable at 28-29°C. For breeding I used tap water with a gH 14-15, kH 7-8, pH 7-8, 20°C. I replaced one third of my tank water with tap water twice over a three day period.

One day I noticed my female suddenly became thin. And the next day I saw quite a lot of small fry with large yellow yolk sacs clinging to surfaces all over the tank. As far I understand the male had expelled the fry from the cave because of his lack of experience. I didn't even see which cave he used for spawning. From this spawning only one fry survived. In a month the spawning was repeated, and I already knew which cave was chosen by the male. When the fry's yolk was almost absorbed (10 days after spawning) I removed the fry from the cave into a 30l tank. I counted 75, rather large fry, 1 cm long. 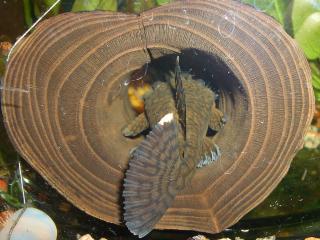 I started feeding them with spirulina and dry foods such as Tetra WaferMix, Tetra PlecoMin and Sera Catfish Chips. Later I gave them cucumber and vegetable marrow from time to time. The fry grow unevenly, and in a month their size ranged from 1.5 to 2.5 cm. In four weeks after this spawning they spawned again. Also I bred them in the separate 30 l tank with a 600 l/h filter. The caves I used were the same as in the main tank. The temperature was 25-27 C with Daily water changes and on the third day they spawned again. I took away the female. On the 11th day the fry started getting away from the cave.

This then is a pretty Ancistrus that appears to be relatively straightforward in care and reproduction, and one that comes well recommended.