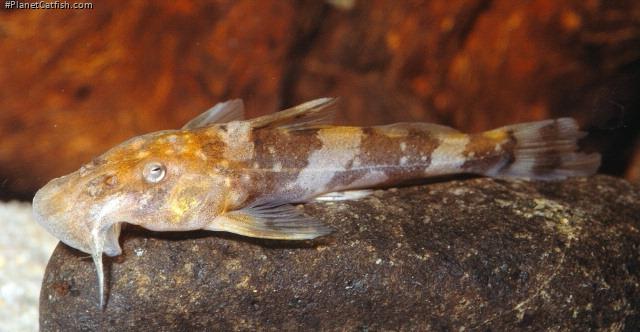 Think of sucker-mouth catfishes and the South American loricariids come immediately to mind. Think again of the African catfish family Mochokidae and the ever-popular Synodontis is the first thing one thinks of. The subject of this month's article is neither of these, but one with both characteristics, Chiloglanis is a mochokid with a sucker mouth.

A genus of about 40 species, Chiloglanis are easily characterized by their small size and circular sucker mouths, and are usually difficult to identify accurately to species. There are two other genera of sucker-mouthed mochokids, namely Euchilichthys and Atopochilus. These two genera can be distinguished from Chiloglanis by their larger body size, and a more elliptical sucker mouth (as I mentioned before the sucker mouth in Chiloglanis is almost circular). Chiloglanis is not easily available in the aquarium trade, but has shown up from time to time as occasional imports.

Unlike the sizes one normally associates with the more ubiquitous mochokids like Synodontis, Chiloglanis are among the smallest mochokids one may encounter in the aquarium trade. Most species typically reach about 60 mm SL (C. polypogon maxes out at 55 mm SL) and are therefore one of the few mochokids that can be maintained in moderate numbers in a tank. A few species (but not C. polypogon) also show sexual dimorphism in the caudal fins (males have larger fins), making it easy to sex individuals in these species.

One common misconception that most people have of suckermouth catfishes is that they are algae eaters. While this is true for a number of species, you'd be surprised at the number of suckermouth catfishes for which algae does not form a significant part of their diet. The African suckermouth catfish is one such catfish. While they will occasionally scrape algae off rocks and tank walls, their natural diet largely consists of invertebrates scraped off from rocks (with algae possibly being ingested incidentally), and as such, a meatier diet should be provided. At feeding time, they will burst out of hiding and will begin to swim in frenzied circles about the substrate, looking for food. Their gustatory search is not limited to the bottom, though: tank walls, filter outlets and even your hand (if it happens to be in the water) are all eagerly sniffed (or in this case, sucked) at. They adapt very readily to a diet of dry foods like sinking pellets, granules, and even flakes, although they are particularly fond of frozen or live (invertebrate) foods.

Like most fishes with a large sucker mouth, the African suckermouth catfish typically inhabits fast-flowing, rocky streams, usually in elevated areas. As such, they require cool, well-oxygenated water. They particularly enjoy a current and like to frequent areas in the aquarium where the current is at its strongest. Once acclimatized to aquarium conditions, the African suckermouth catfish can be relatively hardy and withstand adverse water conditions much better than one usually credits hillstream fish with. However, they are susceptible to ich, particularly when water conditions change (such as when just introduced to a tank). They are peaceful, both to congeners and to tankmates, and make ideal fish for a hillstream biotope tank (although hillstream conditions are not entirely necessary to successfully maintain them, reasonably good aeration being the only key ingredient).

Although most of the comments above have been made with C. polypogon in mind, the needs of congeners are so similar that what has been written also applies to other Chiloglanis you may encounter in the aquarium trade.

Thanks go again to Heok Hee Ng for this month's "catfish of the month" article.