The subject of this month's article can be aptly described in three words: Clarias on steroids. The sharptooth catfish (Clarias gariepinus) is perhaps the world's most common walking catfish, and has become an understated menace as an introduced species. What sets the sharptooth catfish apart from most other walking catfishes one typically encounters is size - lots of it. Sharptooth catfish are known to reach 1700 mm TL and reach close to this size with amazing ease due to their rapid growth rate. In fact, the large size and rapid growth rate are the chief reasons why their culture in Asia is preferred over the native Clarias species (which typically only reach 300—400 mm TL and take much longer to do so). The Indonesian name for this fish is "lele dumbo", the former term being the name applied to all Clarias species and the latter probably in reference to the large size of the species (reminiscent of a famous flying elephant).

Sharptooth catfish are like most other clariid catfishes, being somewhat ill-tempered with tankmates and liable to rearrange the tank decor at will (mostly by dint of their penchant for digging up the substrate). The up side (if there can be said to be one), is like its smaller cousin, the common walking catfish (Clarias batrachus), it is extremely tolerant of a wide range of water conditions and will readily eat anything that fit their mouths (this includes unwary smaller tankmates). Studies on the natural diet of this species have revealed that food items in decreasing proportion were: crustaceans, fish, insects and molluscs.

Among clariid catfishes, the feeding behavior of the sharptooth catfish is perhaps the best studied. Individual feeding can take one of three different forms: (1) foraging, in which the fish swims slowly forward with the barbels projecting forward in a cone and the head swaying side to side, lunging at prey when they are flushed or encountered; (2) shoveling, in which the sloping anterior portion of the head is shoveled under detritus, lifted up and any organisms thus exposed eaten; (3) surface feeding, in which the body is positioned perpendicular to and the barbels spread across the water surface. Water is drawn into the mouth at the surface and expelled through the gill openings. This mode of feeding is effective for taking insects falling on water, and planktonic organisms. 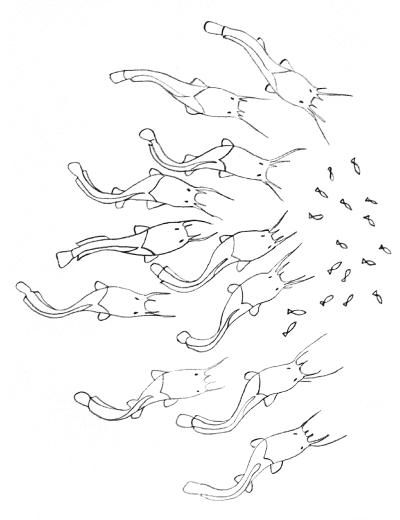 Besides individual feeding, the sharptooth catfish is the only catfish known to exhibit social feeding and group hunting behavior (this has been observed in Lake Sibaya, Lake Kariba and in the Okavango Delta). In Lake Sibaya, social surface feeding was observed, in which small (3—13 individuals) groups of catfish (about 400—600 mm TL) were seen swimming slowly in a regular triangular formation feeding at the surface. In Lake Kariba, sharptooth catfish (15—40 individuals ca. 400—800 mm TL) congregate in a tightly-knit sickle-shaped formation along shallow, gently sloping sandy beaches and in sparsely vegetated marginal pools. These catfish swim slowly inshore near the water surface with their mouths open, herding shoals of small cichlids. At a depth of 50—100 mm, the catfish suddenly close their mouths with a loud noise, open them again and swim forwards with the mouth wide open and partly above the water surface. This causes the prey fish to panic and jump in all directions. The catfish move slowly inshore, opening and closing their mouths in unison. The prey are eventually encircled into a dense panic-stricken mass and are readily captured by the catfish. After eating or dispersing all the prey, the catfish submerge and swim along the shore before reforming as a pack and swimming inshore as a group again. In the Okavango Delta, the catfish were found in migrating shoals, many of which had lesions in and around the caudal fin. This was hypothesized to be caused by the catfishes using their tails to beat the dense papyrus beds in order to chase out prey fish (mostly mormyrids).

Because it has been widely introduced in many places, and because it is such an aggressive predator, the sharptooth catfish is an underestimated threat to native fish biodiversity worldwide. It is perhaps most disturbing to find that this species has now been reported from Brazilian freshwaters (where they have apparently escaped from recreational fishing ponds). In Asia, the catfish are very much capable of successfully outcompeting native Clarias, as they are capable of growing much larger and faster, and studies have shown that they successfully outcompete Asian Clarias in feeding interactions (as the sharptooth catfish feeds both night and day, while the Asian Clarias only feed at night).

Once again, our thanks to Heok Hee Ng for this insightful article. Sketch by Clare Dignall.