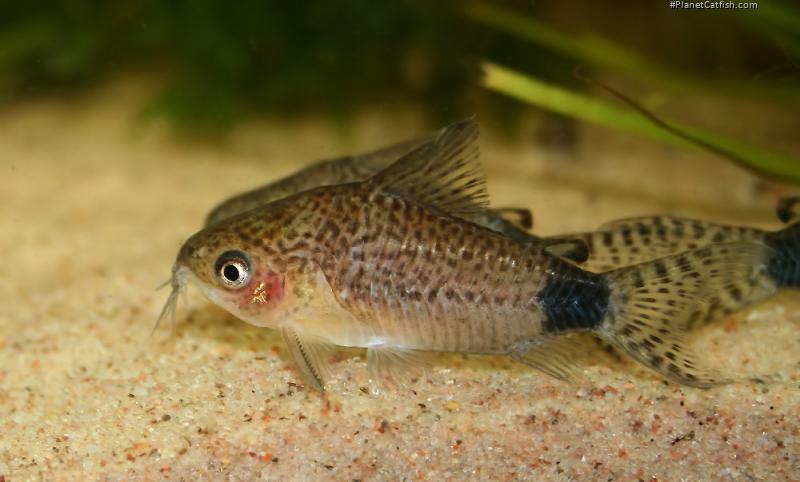 It is an odd fact that there are really quite a lot of catfish folks in Scotland. There are several theories as to why this is, and some are not for polite conversation, but my favourite one is because it's fairly cold and usually wet much of the time and being in a warm fishroom much of that time is quite nice. In such a Scottish fishroom, Graham Ramsay expertly breeds all sorts of tropical fish; he's chosen to write about Corydoras guapore for this, his first CotM article.

Corydoras guapore Knaack, 1961 is a sought-after and beautiful dwarf catfish. It is named after the Rio Guaporé where it was collected by Harald Schultz. It can be distinguished from other similarly tail-spotted corydoras such as C. caudimaculatus and C. similis by its high-backed body profile and habit of swimming in the open water. In this last respect it resembles C. pygmaeus and C. hastatus.

The sexes are readily determined as females are considerably larger than males. Males also have a sharper face profile and bolder markings. Diet is normal corydoras fare and a variety of flake, tablets and pellets should by supplemented by some live and frozen food such as bloodworms, finely chopped earthworms, grindal and white worms. Other live foods such as daphnia and newly-hatched brine shrimp will keep your fish in great condition. For spawning I housed 2 pairs together in a small tank just 15" x 12" x 10" (L x W x H) with an air-powered sponge filter, sand substrate and a large mass of Java moss as a spawning medium. Water parameters were as follows: Temp 78 - 82°F; GH 1; KH1; pH 5.8. Water was changed twice weekly with slightly cooler, aged water. It was several months before the first spawning took place.

I missed the first one or two spawning efforts but the fish spawned every few days for a period of a month or so. The very small eggs were placed in the moss with a few on the glass and most were fertile. The adults eat any eggs they happen across but do not actively seek them out. I removed the eggs into a small hatching tank. Hatching the eggs presented no problems with a small amount of methylene blue being used along with an air stone to prevent the spread of fungus. The tiny (around 2.5mm) fry emerged after five days.

Feeding such small fry (smaller even than C. pygmaeus fry) can be tricky and I used my own cultures of infusoria and paramecium. Additionally I added some Java moss to the fry tank which the fry quickly hid in. Despite my best efforts survival rates were poor initially but improved with later spawns. Half the water was changed each day with water from the spawning tank. The fry can be fed microworms from about one week and newly hatched brine shrimp from about ten days. I moved the fry when they started eating brine shrimp into a tank the same size as the spawning tank. Once eating brine shrimp growth is remarkably quick and they soon lose the 'elegans type' fry pattern and resemble small adults with the addition of a dark blue horizontal lateral body stripe.

The young C. guapore lose their stripe after two or three months and are then large enough to pass on to fellow hobbyists (about 20 - 25mm). I eventually raised over 50 young C. guapore and passed on the breeding pair to a fellow breeder for him to try. I will raise some of the F1 in an attempt to ascertain if they are easier to spawn than their wild-caught parents. Corydoras guapore is a beautiful fish by any standards. A shoal of these fish enhances any show tank and breeding them is a challenge that any fish-keeper will enjoy.