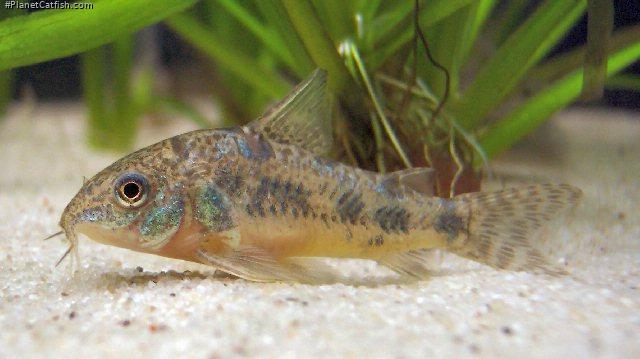 Hardy is the first word that comes to mind when thinking of this fish. In fact you really have to go some to seriously harm these genteel catfish. They tolerate a wide range of water quality and temperatures often unwittingly imposed upon "first time" fish by enthusiasts new to the hobby. The second word that comes to mind is common; this fish is bred and exported by the hundreds of thousands from Florida and Far Eastern fish farms. It is difficult to find a tropical fish retailer that doesn't have these fish in stock most of the time; it follows that they are often an aquarist's first introduction to catfish. The availability of captive bred stock has ensured that wild-caught individuals are a sought-after rarity which don't look quite the same as the fish we are so used too seeing in aquaria.

In general the fish is easily identified and an albino variety is also available. However, the albino cory you see in shops is most usually the albino bronze cory, C. aeneus. Sometimes the more elongate Aspidoras species and young Scleromystax barbatus are confused with this fish by uninterested retailers, but rest assured that if you pick up any of these for the price of a peppered cory then you have done well! Also of note is that this fish can tolerate cool water and will live in most areas of the world in an unheated tank

The aquarium hobby is littered with little gems of information often attached to the most commonplace species. The peppered cory is a shining example of this, as it was first discovered by a young Charles Darwin when visiting Buenos Aires, part of his epic expedition aboard the Beagle in the mid 1830s. The species was later described by Jenyns in 1842.

Most likely, either this fish or the Bronze Cory (Corydoras aeneus), were the first Corydoras species spawned in aquaria, perhaps even the first catfish. This is mirrored by catfish or Corydoras breeders who also cite these fish amongst their first successes. Bronze and peppered Corys were also central to initial observation and recording of the classic corydoras spawning "T" position and environmental spawning triggers.