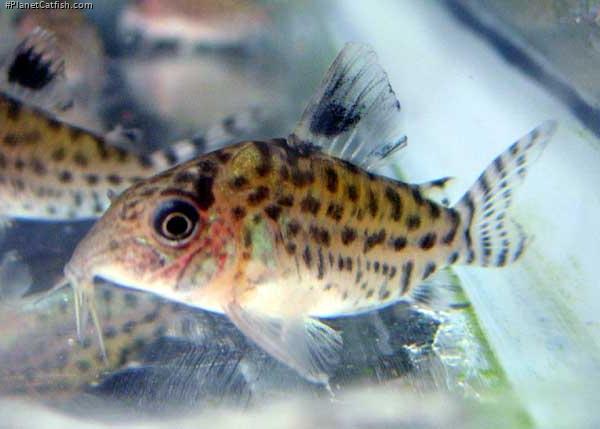 Amanda Parker has been contributing to this site for quite some time now, a few images here, lots of work on the glossary there. More recently she's been helping update the Cat-eLog with various pieces of information, mostly around etymology. It's a logical step up then to a full-blown catfish of the month article and I am very happy to introduce that here.

Walking through a local fish store with a friend one day, we noticed a tank labeled “Corydoras leucomelas.” Contained within was a shoal of thirty five fish that were small, no more than 30 mm standard length and swimming in midwater at a furious pace. The colouring of these fish was most remarkable: the caudal fin appears striped; a white background with thick, even black spots on the body giving a clown-like appearance; the dorsal fin has a black blotch that is isolated to the middle, surrounded by clear; the snout has the smallest black spots; the pectoral and anal fins are devoid of colour. These fish still carried the yellow tinge of wild-caught fish. We each purchased eight of these fish at a low price.

Once I got home I put my eight fish into a 10 gallon quarantine tank. The furious mid-level swimming resumed as if nothing happened. But, how do I go about identifying this species? It most definitely was not Corydoras leucomelas, as labeled. I posted a photo on Ian Fuller’s site Corydoras World. Ian identified, from a photograph the species as Corydoras lamberti. Identified by Nijssen and Isbrucker in 1986, Corydoras lamberti may be found in the Rio Huytoyacu near Neuvo Progresso in Peru, Loreto Province. Coincidentally, Corydoras leucomelas also comes from the Loreto Province, as do several other common Corydoras species.

The group began feeding in less than 36 hours. The foods of choice for this species seem to be blood worms, freeze-dried tubifex worms and frozen daphnia. For some reason, this Corydoras species does not like brine shrimp. After one month, the wild-caught yellow tinge had completely faded. As with most Corydoras species, plenty of cover is appreciated. Driftwood and plants (floating plants, if there’s no substrate) usually do the trick. A water temperature between 72-74°F appears appropriate. If substrate is provided, please make sure it is barbel-safe. Regular weekly water changes are strongly recommended. I have yet to breed this group of fish but, I believe it will be possible, with time, patience and water changes.