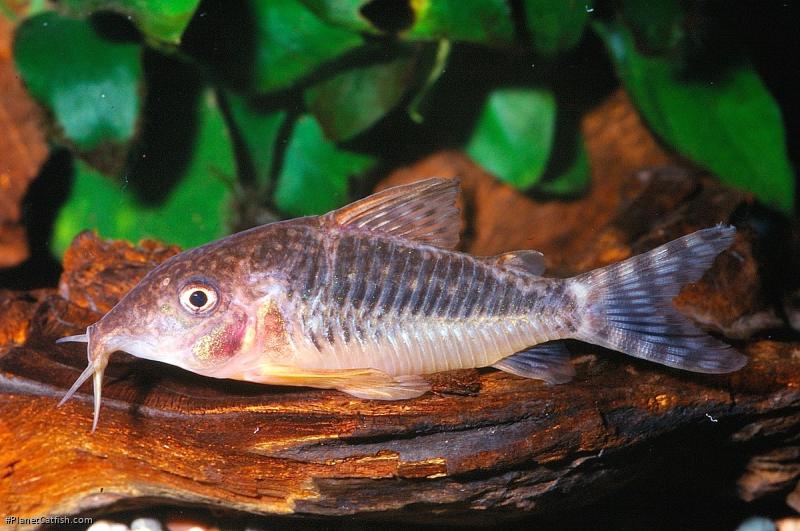 Chris Ralph introduces this month's featured catfish, not a common find in our LFS despite belonging to the most commonly encountered group of catfishes. The basis for this Catfish of the Month article is an edit of an article first published in Tropical Fish magazine, June 2005.

Corydoras seussi belongs to the family Callichthyidae and hails from Brazil, specifically the Rio Poranga a tributary of the upper Rio Negro and the Mamore River basin.

The fish is the typical triangular Corydoras body shape but with a pointed snout. The base colour of the body is tan overlapped by a much darker coloured pigment that is slate grey/blue. The dorsolateral scutes are much darker exhibiting the slate grey/blue colour than the ventrolateral scutes that are tan coloured. In case you're wondering, the term dorsolateral refers to the area above the lateral line and below the dorsal fin and ventrolateral refers to the area below the lateral line and above the ventral fins.

The head region is overlaid with an orange to almost gold colour, in natural sunlight this is truly magnificent. The head area around the barbels and eyes is also overlaid with light coloured spots. The first rays of the dorsal, pectoral and ventral fins are orange in colour interspersed with some slate grey/blue colouration. The soft rays of the pectoral and ventral fins are orange in colour, whilst the remaining fins (dorsal, anal, adipose and caudal) are light (beige / white) coloured with slate grey to black coloured almost stripy markings. The caudal fin has 5-6 distinct vertical black bands/stripes. In bright sunlight there is a green sheen that can be seen over the top half of the body of this catfish.

Corydoras seussi has been available to the hobbyist for a few years now, and shares a similar colour pattern with Corydoras gossei, which differs in having a rounded snout. Before being described scientifically as Corydoras seussi this splendid catfish was referred to as C027. While this species prefers to be kept in water that has a pH in the range of 6.5-7.2, it has been known for this species to tolerate a much wider range of pH 6.0-8.0 and hardness in the range of 2.0-25.0 dGH.

As with all the other Corydoras that I have had the pleasure to keep over the years, Corydoras seussi readily accepts a mixed and varied diet. I personally feed all of my Corydoras on sinking pellets, good quality flake foods, granular foods, cultured whiteworm and frozen foods such as bloodworm to name but a few.

I would suggest a minimum size of 24" x 15" X 12" for a shoal of these fascinating catfish. The preferred substrate for keeping these catfish should be good quality aquarium sand or very smooth rounded gravel in order to prevent their barbels from being damaged. The aquarium should provide some shelter in the form of rocks, bogwood and aquatic plants. As with all species of fish, water quality and general husbandry is very important, and I would recommend that the aquarist undertake a minimum of 25% water change on a fortnightly basis.

These catfish are very peaceful towards their own kind and indeed other species of Corydoras. These catfish are ideally suited to being kept in a community aquarium environment with other non-aggressive species of fish such as tetras and dwarf cichlids. Whilst Corydoras seussi are not cheap to purchase, wherever possible I would recommend that you purchase a minimum of six specimens, as they are naturally found in the wild in large shoals.

Whilst this is a species of Corydoras that I am fortunate to have kept in recent years I was unable to persuade the fish to breed. Whilst there are documented records for spawning the similar coloured Corydoras gossei, I am not personally aware of any successful accounts for spawning C. seussi to date. I would however, envisage that when breeding these catfish would adopt the typical Corydoras "T" clinch when mating, which involves the female transferring sperm from the male to her eggs held in her ventral fins prior to them being laid carefully on a chosen surface. It is documented and observed that the female takes the sperm from the male into her mouth which is then passed out of her vent and on to the eggs that she holds in small numbers between her ventral fins.