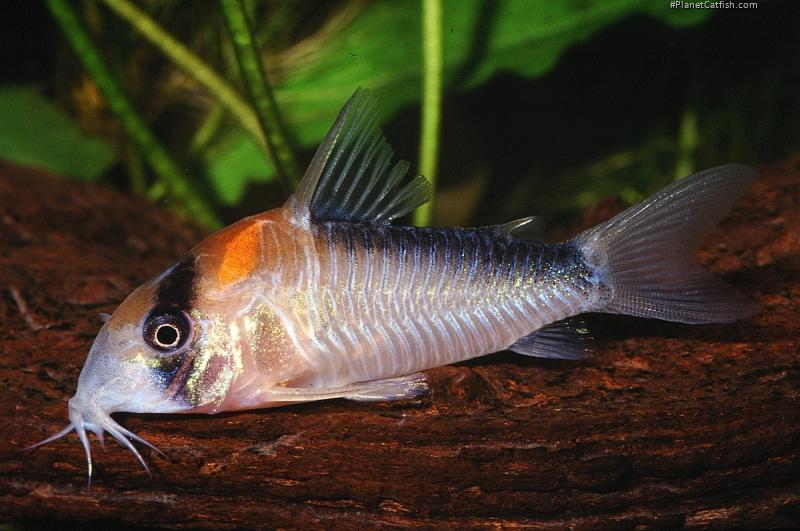 It's a pretty lame common name, but there you are. This fish has never really had a widely used common name probably because its scientific name is easily pronounced. This is a truly beautiful catfish; (very) arguably the most striking of the genus. Combined with this, C. adolfoi is relatively easy to breed which adds up to an all round appealing fish. Wild caught C. adolfoi are usually expensive, building up the required shoal of these fish in these circumstances can be a financially demanding task. However if someone in your area has already undertaken this task then you may be lucky enough to come by the resulting offspring at your local retailer or fish club. These should be more "competitively priced" but often smaller. In my experience tank bred C. adolfoi are sold quite small (around ½" long) and are slow in growing up to adult size.

Intriguingly there is a long-nosed Cory (C. imitator) which shares a similar colouration (the characteristic orange head spot is more yellowy in C. imitator) to C. adolfoi. There is the more recently described C. duplicareus to confuse us further. This fishes black dorsal stripe extends down to almost cover the upper row of lateral armour plates.

This is something about Corydoras that has always fascinated me; take for example the appearance characteristics of C. adolfoi and C. imitator. These are very similar, except the exact tint of the orange/golden cap and the latter's long-nose. Taking this further imagine all the known species of Corydoras as a source pool, change one feature of a given species and see if the resulting fish matches another described species. You can go right through huge amounts of the described species by playing this simple 'game'. Just don't try to include C. barbatus. C. robinae is a bit tricky too! If you get stuck don't get mad, there's probably a fish in the next batch of new imports that'll come to your rescue.

Further on these musings, I've always wanted to write a piece of software that essentially was a Corydoras "identi-kit". Without getting into the seriousness of taxonomical identification keys, imagine a piece of software that with a simple graphical interface would allow your "user defined" Cory to have spots, a long-nose (or maye a C. elegans-style "bullet" round nose), a head stripe, tail-spot, reticulated pattern etc. Just a bit of fun, but it could be expanded into the realms of species identification. Now where did I put that "Teach Yourself Programming in 30 days" book...