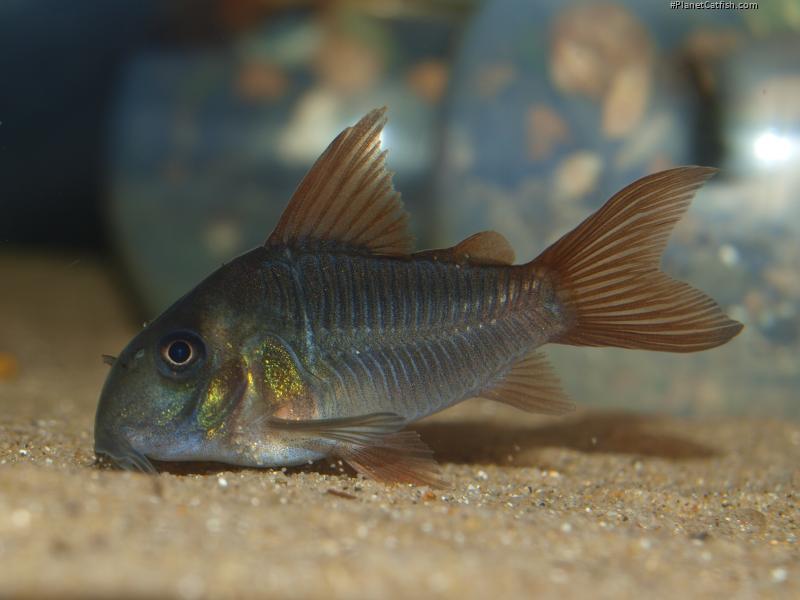 Allan James, fellow webmaster of the excellent "Scotcat" site shares one of his personal favourites with us this month. Over to Allan...

This is certainly one of my favourite Corydoras and as you can see in the photograph here, a male, it is somewhat similar to the Bronze Cory (Corydoras aeneus), but there the similarity ends. Though C. concolor never attains the length of the bronze Cory, it is certainly a more robust looking fish. It appears to be more chunky, especially fully grown adults which can get very heavy and impressive looking. Colour-wise it is not startling compared to some other members of the genus (the species name, concolor, actually means, uniformly coloured; of the same colour) but well looked after specimens, especially in breeding condition, display fins of a rusty orange colour and against a grey to brown body it is certainly one of the more unusual and sought after species.

I first acquired four of this species from a friend in 1994, as he was having difficulty keeping the barbels on them, probably due to bacteria in the gravel. Bottom dwelling catfish, especially Corydoras, are the first to suffer from adverse conditions in the substrate.

I kept them on sand in my fish house Cory community tank up to the beginning of 1996. Slowly they began to grow back their barbels. I then set them up for spawning as I had, as it transpired, two pairs; the males are somewhat smaller and have an elongated dorsal fin with the females noticeably heavier looking.

As mentioned earlier, both sexes have a nice orange colouration to their fins with some species having more colour than others, probably depending on the wild catchment area. I find them quite an easy Cory to keep but somewhat shy in their surroundings.

I sometimes wonder why they are not more popular, but in the U.K. at least, they are not abundant in the aquatic shops. If you do find them, have a go at spawning them, you never know you might end up with a delightful tank of youngsters!