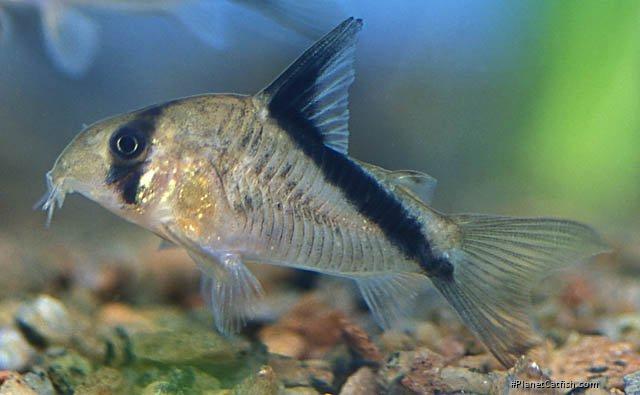 All corys are facultative air breathers, meaning that, depending on conditions, they have the ability to breathe atmospheric air, to a certain extent and if necessary. They do this by utilising a modified intestine, which has many more blood-carrying vessels than other fish, that assist in the uptake of atmospheric oxygen. This adaptation allows them to survive if their habitat becomes oxygen-deprived for any reason. In the wild, one can sit next to a still pool of water containing these fishes and watch it bubble here and there as they come up for air. In many cases Corys live in what we would call muddy water and can't be readily seen from solid ground. So, when attempting to collect them in the wild (at least if you're on your own with a decent-sized dip net) one can take a blind swipe at the water below such a bubble and this will yield a Cory from time to time.

In the aquarium they continue to do this. You'll see them darting to the surface to take in gulps of air on occasion. This is perfectly natural and no cause for concern unless the amount of dissolved oxygen present is lower than it should be, in which case the frequency of visits to the surface will usually rise correspondingly. Corys will often do this in quick succession, and a group of half a dozen or more Corys doing this is fun to watch.

Corydoras melini is a commonly imported species and can be confused with other wild imports such as C. davidsandsi andC. metae. All of these have both a vertical black stripe through the eye (hence the bandit mask common name) and a black stripe diagonally down the back. Generally, C. melini has a 'dirty' look to its flanks with haphazard touches of black colouration on the twin row of armour plates all Corys have. The reliable identification characteristic is the precise shape of the black stripe running from the lower dorsal fin area to the upper caudal fin. In C. metae this terminates at the caudal peduncle, leaving the tail fin clear and showing a short bar, vertically, on the caudal peduncle. In the other two species the stripe splits into two above the caudal peduncle, a feature most readily viewed from above. C. davidsandsi is also marginally more elongate (or lower in the body) and differs slightly in body colouration — it is paler and without even a hint of pigmentation on the flanks. C. melini is the overall sandy brown fish with those “dirty” marks and with a much higher body shape, akin to C. metae, hence the common name False Bandit Cory.

Acquiring a group of these attractive Corys will not, however, involve daylight robbery. Wild imports are inexpensive as Corys go and it's a species that is sometimes bred in captivity. Therefore it sometimes appears at breeder-friendly LFS and club / society auctions. Irrespective of the route this species is offered to you, it's a nice one to consider for a modest aquarium.