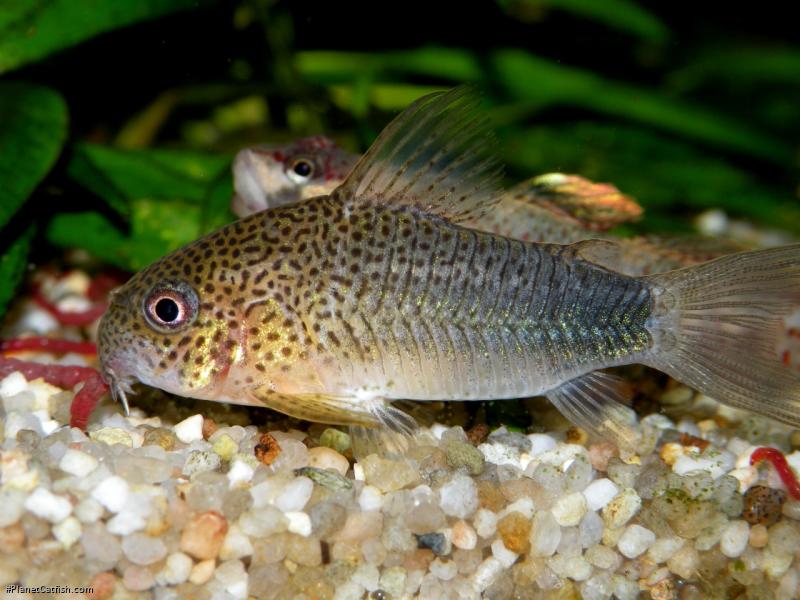 This catfish of the month is introduced by guest aquarist Ian Fuller, a self confessed "Corydoras Nut"; Ian has spawned over 40 species of Corydoras in his considerable time keeping members of this family. Ian has also contributed 3 excellent line drawings of this species' fry development you cn see in the breeding information section. Over to Ian...

The trouble with Corys is that if you put a group of say C. similis ( 6 or 8 ) together in one tank they'll act one way, move them into another identical set up and they'll act in a completely different way. When I first got my C. similis they were as busy as beavers. When, after a couple of weeks, I put them into a larger tank, they went to ground and just huddled under the heater. They emerged only to forage.

I tried various things to liven them up, raising and lowering the temperature, as well as water changes using warmer and cooler water. All to no avail. Resignedly, I put them back in the tank that they were first put in -and would you believe it - they went and hid under the heater. I let them be.

They became a little more active only when live food went in; white worm, tubifex or daphnia, one of which they were given at least once a week. Although largely inactive, all fish looked in fine condition, and the females in particular appeared rather plump.

After two weeks without water changes I did what I call my "classic water change": 80% of the water is removed and replaced with fresh water at least 7 to 10 degrees cooler. The cooler water is returned fairly slowly via a small spray rose on the supply pipe. There I go giving all my trade secrets away. Well some of them anyway! Two days after the water change they spawned. Only one female took part and she laid twenty eggs, which turned out to be infertile. A month later I used the same trick again, and with the same result, only this time the female laid about thirty eggs that also turned out to be infertile. Now an infertile spawning is one thing but two on the trot is something else. Nevertheless, after another six weeks I went through the same procedure, but, crucially, with water only 5 degrees cooler.

"Bingo!" 28 fertile eggs were laid. After the spawning was complete the adult fish were removed and released into their original tank. They were visibly more active and less secretive than before. Also one or two plants, in this case Java fern and or Java moss, seemed to make them happier.

Though that was in 1993, I am keeping C. similis again and find that they are just the same. I am about to put my current group into a tank higher up in the fish house to find out whether slightly warmer water will make them a little more active.