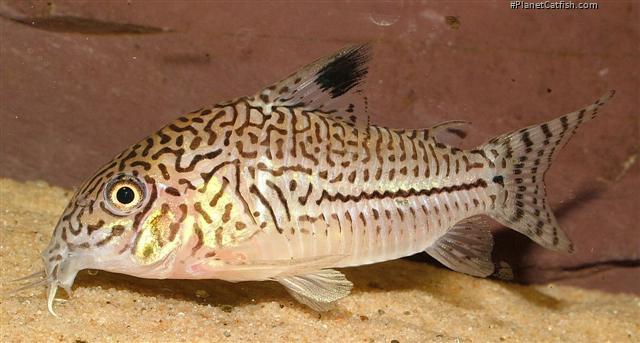 When writing a catfish of the month article, I focus on a facet or set of features that make the individual species in question unique or interesting to the aquarist. Usually these are natural features like behaviour, physical appearance and the like. Among the multitudinous ranks of the genus Corydoras it is hard to find many that stand out. Like many other species in the genus, this month's catfish, which can commonly be found in aquatic retailers' tanks the world over, is a species that does not stand out.

To find a talking point we have to divert from the natural and examine the artificial. Mankind has given this unassuming little catfish the doubtful pleasure of being the most commonly misidentified catfish of all time! As I mentioned, it is commonly found for sale but rarely labelled correctly. Almost always labelled as Corydoras julii or simply as the "Julii Cory", that it is not. C. julii is a valid scientific name, but for a different species.

If you examine them closely these two species have only really a passing resemblance. That said, the three line Cory, like many other species of Corydoras, is quite variable in terms of colour patterning. Compare the picture on the left and the one above - both are C. trilineatus. The fish above displays bold reticulated (wavy) lines, particularly around the head area. Now look at the image on the left, the pattern is not as well defined although the lines are still present. There are two features you should look for when attempting to tell the species apart. Firstly Corydoras julii tends to have a more broken mid-body lateral stripe. The top image on this page shows a very bold strongly defined line which is a good example although, again, the image to the left is less well defined. In C. julii the stripe is almost a collection of spots running along the body. Maybe more significant is the patterning on the fishes head. This is most easily compared if you look at the fish head-on (see image below). C. julii has distinct spots and no reticulated lines whereas C. trilineatus always shows at least some of these wavy lines.

So, there you have it - a tale of two corys. The history of this great misidentification I am less sure of. Most likely the first species imported was indeed C. julii from Brazil. The more recent opening up of South America, in terms if export by air, allowed species from other countries (specifically Peru in this case) to replace certain species with others in the marketplace. 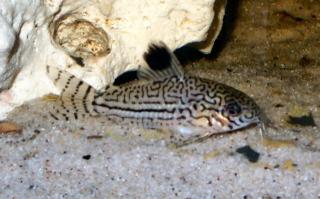 To a degree, older literature is to blame, although if you look at quite a few really old aquarium books from the middle of the last century you are often surprised by a picture of the real C. julii. Enough about C. julii - it's hogging this spotlight which should be on C. trilineatus. The bottom picture in this article I took this morning to go with this article. It shows (from left to right). Corydoras similis, C. trilineatus and C. gossei. This particular C. trilineatus is special and has a story to tell.

During a tropical fish collection expedition into the area down river from Iquitos, Peru, we chanced across a local hut literally in the middle of nowhere. Nothing remarkable about that, this was a common occurrence, but within a small girl was ill with fever. Her somewhat anxious father asked the leader of our party as we passed if we could help in any way. We gave him some paracetomol to ease the girl's condition. It was all we could do, but the father was very grateful. Espying our various nets and buckets he correctly guessed we were collecting fish and rushed off to soon return with a small plastic bucket. Within it were a number of Corydoras which he had collected to sell onto exporters or their agents. He gave us these with his thanks. The specific three line Cory you see here was in that bucket.