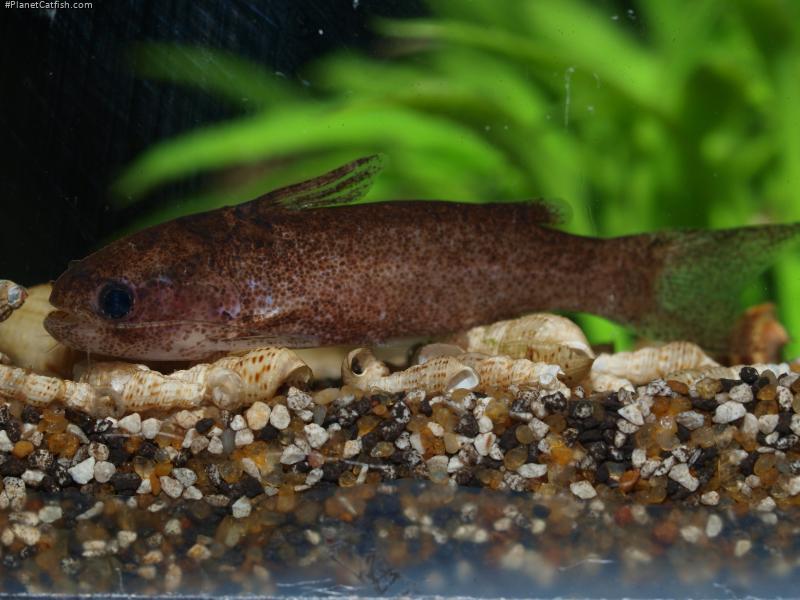 Sometimes it's the little, dull and shy fish that turn out to be the brightest stars of all. Such is my view of this species, but to explain why (I admit it might be a tall order) we must start at the beginning.

I first met this species by proxy. My great friend Shane Linder sent me a picture of a fish he had collected in the Venezuelan Llanos. He found them, photographed them and they were first introduced to this site intially us an unidentified species of Tatia. Shane notes the following in his "Venezuela Diaries":

"Rio Santo Domingo, Cojedes State 7 April 2001
In its lower course the Santo Domingo is called a Rio while the upper portion is reffered to as Cano Santo Domingo. The exact collecting location was on the dirt road that leads west from highway 8 at Cano Benito approximately 40 km north of El Baul. Since it is the dry season, the Santo Domingo is not a river anymore, but a series of unconnected pools. We collected from a pool under the bridge and turned up some very interesting fish. The pH was measured at 7.0 and the conductivity at 1,100 mu. The temperature was about 84°F and the water had almost no visibility. In a glass container the water was the color of weak tea. This area is northern most range of Apistogramma macmasteri. The substrate was thick leaf litter and driftwood with no aquatic plants. Collecting the leaf litter turned up:

It was possible with one sweep of a ten foot seine to capture two hundred odd Otocinclus and / or Corydoras habrosus (the two were always mixed). The two auchenipetrids were also very common and we thought we only had one sp. as the color patterns are very similar. Only later did we realize that one has a dorsal and adipose fin and the other only has a small single dorsal spine with no adipose."

This months species is that fish and, several years later, we then worked out their correct identity — meantime however I'd been to Venezuela and collected this fish for myself, also in the dry season.

It lives both in the clearwater (in the food and vegetation abundant) environment of the flooded llanos, as well as, the murkier, whitewater, confined spaces of the dry season. A fish for all seasons but not one that is immediately obvious in its biotope — in fact only its relative abundance means that it comes to your attention at all. I suspect however, collecting at dusk would yield a much higher percentage of this species in relation to the overall catch.

The fish itself is a perfect aquarium fish. I have said it is little, dull and shy — however these seemingly detracting attributes can be seen in a postiive light: it doesn't grow too big and eat other fishes, it relies therefore on its character to intrigue and, best of all, its shyness means that when you see them you do appreciate them all the more. Actually this fish isn't shy, it just is inactive during the day. That is, until you feed them. Feeding time sees a completely different side of this species. I have an adult group of eight of these fish in a tank; they lie in free moving vegetation, on the bottom near rocks or wood and do nothing. When you feed them, well, the best way I can describe it is like walking up to a beehive and thwacking it with a plank. These fish go from total inactivity to a manic buzzing around the tank in seconds. Berserking is the best I can do to describe the frenzied motion. Great fun to watch them do this and they do it every time — this is not stressed but normal activity. In the wild this will either be a reaction to the presence of food, or, as with many wood cats, will be a reaction to the time of day that signifies feeding time. This species is a surface feeder. It feeds in the top third of the water column. In nature I think it feeds at dusk on insects that hit the water surface, or are making their way to it. That's just a hunch, but in the aquarium, it replicates this behaviour for most foods and feeding something like live daphnia really shows it well.

Keeping these fish was already rewarding; then they did the most remarkable thing; they bred. On our forum, Martin Swanston first reported this. This achievement really caught my interest and when I found this species again, this time for sale in a local fish store (along with a bunch of other imported llanos species), I decided to reacquaint myself. There was a funny story in this itself — Marc Stabel, from the Netherlands was visiting with his family and I took him to this fish store. We scoured the tanks and he found some nice fishes, but at that time, the Duringlanis evaded both of us and the, perhaps somewhat absent minded store keeper did not remember he had these fish despite him getting in a few other species of wood cats just for us! Marc would surely have bought them all and, knowing his passion for smaller representatives of this family of catfish, I would gladly have seen him do so. To this day I would swear those fish were not in the shop. 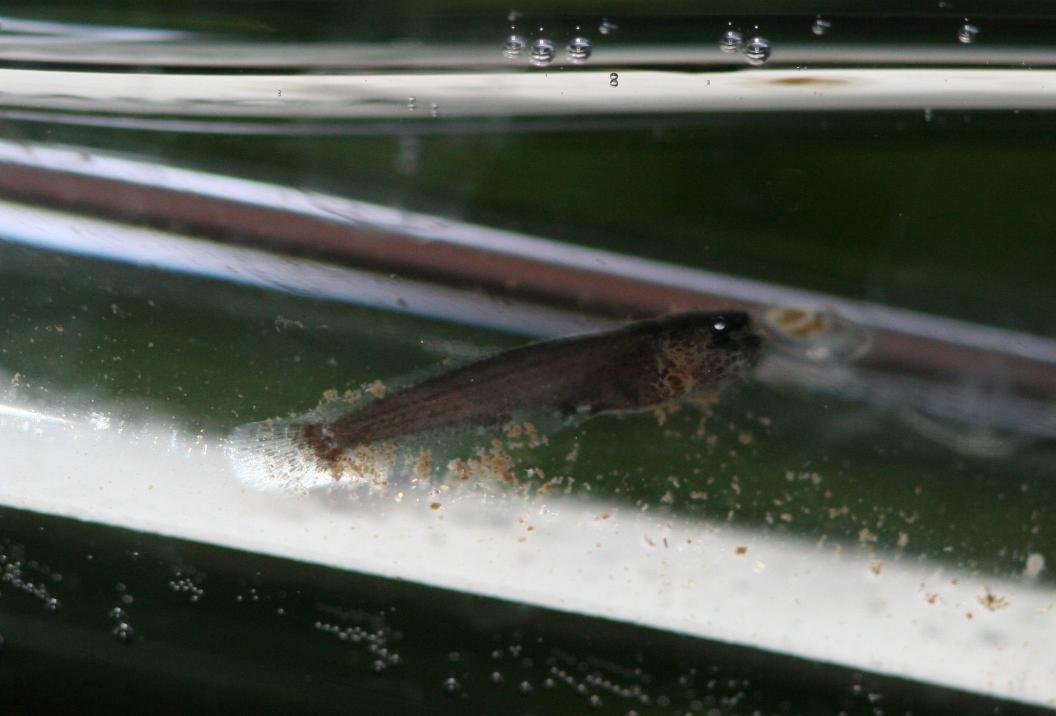 However, this oversight was ultimately to my benefit and a group of eight was purchased months later when I happened across them in the same shop. I lost one, rather emaciated, male specimen within a fortnight. They were not expensive; around the same price each as a medium sized tetra. They did not do very much other than the behaviour I noted above. I was left with two males, four females and the other I am uncertain of.

When you first breed guppies or similar live bearing species, it, especially if you are a beginner, is really exciting and often happens without forethought or planning. I mean, you just note a tiny fish swimming around and feel a little proud. If, like me, you then panic and go buy breeding traps and all that kind of thing to do your best for the new arrivals, then you will really enjoy this fish. Even with years of keeping fish, when I spotted 5mm fry of this species in the tank, I was elated. They are nice, fun fish and that makes breeding them equally so.

I did not, however, rush out and buy a breeding trap. Rather I worried about how to look after these few tiny young fry — they were five or six that I could see. At this small size, I reasoned they were delicate, yet their behaviour was exactly that of the adult. Despite ultimately not moving the fry, I was concerned about the parents eating the young. In the end, my experience of the wild habitat of the fish won me over and I stuffed the top third of the tank with fine-leaved plants similar to Cabomba. This appeared to work; the fry grew, more appeared. Food however was not reaching the adults easily and the fry didn't seem to grow very fast. The plants were a bit of a nuisance; I removed them and replaced them with plastic floating plants. There are these balls of plastic plants you can get and they, partially disassembled, have been excellent additions. My fear that the parents would eat the young was unfounded. An even more sinister threat meant my first few batches ended up in only a few youngsters reaching the robust 1.5cm mark. The fry are cannibals; larger fry eat smaller ones and here is the challenge. These fish spawn, it appears, relatively easily, however, you must raise the fry in batches. Any fry around 50% bigger than another will eat the smaller.

Once I mastered this, it was easier. The fry will eat anything the adults do. I start them on ground flake (prepared using a mortar and pestle), similarly ground tetra prima and frozen red plankton. Actually, it is just like raising guppies; I was over doing their care. Once they are 1cm long or so, they will happily tackle a frozen bloodworm bigger than they are and other prepared foods are eaten too. 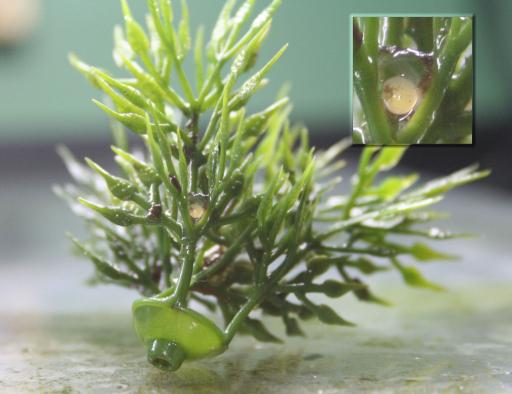 In my first few spawnings of this species, which happened in a tank a short faced 11”x15”x15” (27.5x37.5x37.5cm) with a small internal power filter (fluval 2) at 77°F and with only two Pterobunocephalus depressus for company, I noticed 5mm transparent balls present that, presumably because sticky or covered in mucus, picked up grains of sand as they sat on the bottom. I first thought these were egg cases and the fish were live born. Later however, I observed that lightly milky white translucent eggs, no more than 1mm laid on java moss strands, initially they were inside a the much larger transparent cases. They resembled miniature single frog spawn but with cream as opposed to black centres. They hatched very quickly (in under one day) into wriggling little fry that became free swimming and took on pigmentation in under three days. From egg to something resembling a newborn guppy in under a week. What is the other clear spherical object? How do the fry hatch so quickly? Total conjecture on my part, but perhaps internal fertilisation occurs, to a small clutch of eggs each contained within a sphere is internally fertilised, then laid and, as a way of getting fry up and running competitively quickly, that is all timed to minimise the time the eggs are exposed before they hatch. Certainly no parental care is shown despite the very carefully and individual placement of eggs on vegetation.

I would suggest that if you have males and females, with some live or plastic plant cover and no real predators of any kind otherwise present, then spawning this species is just a matter of time. How many people do you know who've spawned an Auchenipterid? If you're a regular cory or pleco breeder, then this fish is a really interesting diversion. If you're not a regular breeder, then this fish is an excellent next step in your hobby. In fact, it might be one of the best fish that I know that doesn't get bigger than an inch.