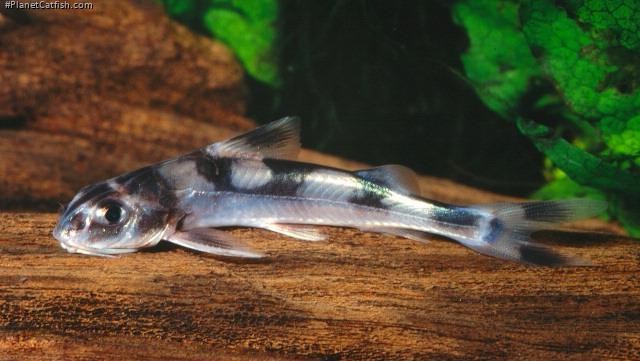 Over the years, the name “clown catfish” has been generally applied to species with a bold coloration and with highly active disposition. Nowhere is this name more apt than in the subject of this month's article, Gagata cenia.

Unlike most other members of the Sisoridae, Gagata are highly active, schooling fish, but like other sisorids, they require cool, clean, well-oxygenated water, and enjoy the presence of a current very much. There is evidence to suggest that at least two different species of Gagata even form mixed schools in the wild. They are nervous bundles of energy, constantly twitching their fins and dashing about the tank madly at the first sign of stress (because of their schooling nature, individual fish do not fare very well in the aquarium). Consequently, they do not travel well, and newly imported fish sometimes arrive in a weakened state that leaves them prone to infections. Although they can adjust to prepared food, they seem to do much better with a feeding regime consisting of mostly live foods. The reduced jaw teeth and gill rakers of G. cenia seem to support the fact that they are suctorial detritivores, meaning they feed on fine organic matter by vacuuming it off the substrate.

Because of the delicate nature of these fishes, they are not suggested for the beginner. However, once they acclimatize to the aquarium, a school would provide plenty of bottom-feeding activity for a fast-water tank setup.

Thanks go again to Heok Hee Ng for this month's featured catfish, we sign off with a useless piece of trivia - this catfish and last months feature were described within a couple a years of each other (nearly 200 years ago) and were both considered Pimelodus at the time.