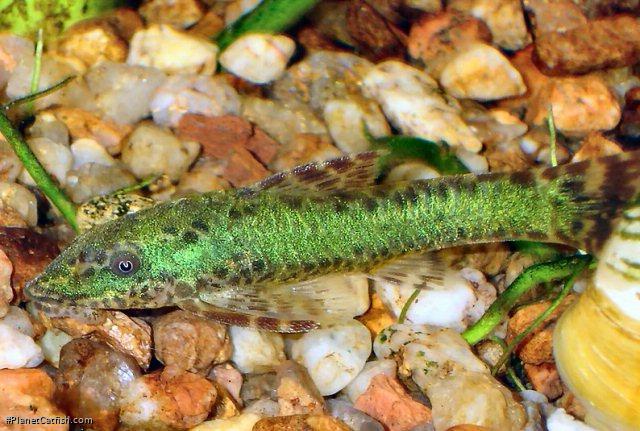 The author of this month's article came to the wider attention of the great British fishkeeping public, and beyond, with his all too brief tenure as a staff writer on Practical Fishkeeping Magazine. Establishing a rapport with the then editor Jeremy Gay, the dynamic duo added zest, (sometime irreverent) sparkle and intelligent discussion into the publication, in short a PFK reboot. Whether you are publishing for the web or the physical world, content is king and this new wave of up-to-date opinion pieces and fresh coverage of established topics worked well. I'm delighted that, after moving to pastures new, Nathan has contributed a piece on the catfish of his choice, Hisonotus aky - in his words - the (understated) Green Oto.

Something that often surprises my contemporaries is that my all time favourite fish - my favourite catfish at the very least - is one that I have never seen in the flesh. The first time an opportunity to see one came up, my transport fell through, and all of the fish had been expeditiously snapped up by wise shoppers before new any wheels could be arranged. On the second opportunity, many months later, stomach knotting nausea brought about by ill-cooked food meant that my fellow travellers had no desire to spend hours trapped in a car with me. I was taken home and off-loaded, though on this latter occasion, my colleagues did at least return with immaculate images for me to covet.

I've long admired how unique catfish are in resisting homogenisation. Aside the whiskers and the lack of scales, there's no catfish unity, no all-encompassing visual 'characteristic' that binds them to the taxonomic circus of underwater life. We can all recognise a catfish, for sure, but across the spectrum of shapes and sizes, they are a remarkably amorphous family. A characin is a characin, is a characin. But a catfish is enigmatic and sublime; personable and individualistic.

Hisonotus aky is my frustrating, open secret, amongst the medley of fish making up the hypoptopomatinae. Without seeing them, UK based followers of diminutive suckermouths would be forgiven for thinking that any small cat like this is just another voice amongst the crowd; a rich swathe of 'meh'. That's what happens when a nation obsesses over imports of Otocinclus vittatus, and baulks at the prospect of looking in to the long lists of names on livestock availability lists. Of course so many people think small cats are boring, we never get to see any good ones. If we want brighter species we're expected to shuffle down the line to the Panaque, Peckoltia, Hypancistrus and other substantial, brash and perhaps garish presences.

My own Hisonotus epiphany struck me when I first read the Baensch Catfish Atlas by Evers and Seidel. At that time it was still categorised under the name Epactionotus, a genus made up of strictly endemic species tethered to tiny geographic ranges. The name in the book harkens from a description given in 2004, though Evers and Seidel had apparently toyed with the moniker Hisonotus sp. 'Argentinien' in 2002.

Regardless of naming, what shouted out from the pages of that book were images of shocking emerald green, an oddly malachite catfish hue that I have yet to see on any other extant fish. The markings of this miraculous beast are so cryptic that my first impressions when I gaze on them are always herpetological; a degree of camouflage sported by chameleons or anaconda. And that camouflage is finely crafted for their home. When you're as tiny as an aky, not even getting beyond 4cm long, sometimes hiding in plain sight is all you can do.

Hisonotus aky is unique among its genus for having two known geographic reaches, both tributaries to the Rio Uruguay, but widely separated. The type locality is a tributary to the middle of the Rio Uruguay basin in Argentina.

Less known is that H. aky is also found further east, on a tributary to the upper Rio Uruguay in Brazil. Speculation about the division is fledgling, confounded by a lack of data from the stretches in between, but H. aky is still the only Hisonotus known to have such a distant satellite population outreaching from the type locality. There is the motherland hardcore, and then there appears the once nomadic H. aky, it seems. The only noted difference between these two populations is a little extra pigmentation on the caudal peduncle of the Brazilian 'variant', but aside that the two are considered conspecifics.

In Argentina, they are found in typically clear water with moderate currents, where they cling to the undersides of an Echinodorus species - what I would give for a botanist to supply a name and cutting of that plant - which is where the benefit of their cryptic green hues comes to the fore. They inhabit the Arroya (Creek) Garibaldi and Arroya Fortaleza. In the former, their discovery coincided with rainfall and some water turbidity; a detail. The Garibaldi stream they call home is (or was, at time of collection) a scant 4m wide, between 70cm and 1.5m deep. The pH is low, around 6.7, with dissolved oxygen at 8.8mgl- 1. At Arroya Fortaleza, the pH was found a little higher, up to 7.5, despite a low hardness of less than 3°DH.

Anecdotally, I have heard unverified reports of H. aky coming in green and brown populations, with one inhabiting the lush, sun drenched part of the creek, while their darker cousins lurk in the shade, where leaves lack vitality. I have yet to find anything that corroborates this, but if found to be true, it will only increase my already heightened fascination.

In Brazil, H. aky are reported from rapidly flowing watercourses, where the bottom of the stream is rocky and the water often tinged brown. Here, another unspecified (perhaps the same) Echinodorus sp. forms thick-green, umbrageous islands clinging to rocky substrates, and the Hisonotus use these isolated thickets as their permanent homes.

With the western populations, there is a unique subtropical fetish that make the fish even less likely to appear in the sweltering, steady-temperature sweatshops of most retailers' systems. Indeed, it is a necessity that these fish are kept away from equatorial heats, being happier between 16 and 24°C than anywhere above. Even during Argentinian summers, temperatures at collecting points are in the sub-24°C region; and a mere 20.6°C at Arroya Garibaldi in February. Winters will be considerably lower. With eastern populations, I am at a loss; that information escapes me to this day, along with water parameters there.

I find a paradox in their scarcity in the hobby: I am unusually glad for it. Given the tiny natural domain, I would be resentful to see them hauled out en masse and sold in a 'boom and bust' moment of selfish marketing. But equally I flinch at the idea that they are potentially being purchased as a single trophy. This is one time for the breeders to step up to the plate, and take Hisonotus under their control. I would hate to invite a prophecy by writing that these fish, with their tiny geographic coverage, are those most at risk from human encroachment, but a single box of ill placed detergent has the power of extinction in some parts of the world. Besides, habitat development and improvement - as it is so euphemistically and frequently called - has yet to show any sign of slowing. Let us not witness another Hypancistrus zebra scenario.

There's no reason not to breed them. It has happened. To my knowledge, Paul Dixon of the Bolton Museum Aquarium has achieved it. Sexual characteristics on adults are easy enough to spot, the males trailing longer fins, and forfeiting some of their beguiling green hues in favour of spots instead. The chubbier females don their verdant colours all the more fiercely. Get close to their undersides as they hug glass and you'll see the ladies have a shorter, blunter vent.

If you came here for my advice on keeping them, I have shamefully little to offer. From the exiguous information I have collated, these stunning 'Otos' come across as sensitive to substandard water conditions, but there's nothing new there. They have a fondness for soft leaves, I am informed, but I have nothing beyond hearsay to support that. I have an omination that a river manifold would be wise, and am almost eager to try. Yet at the same time, I lack my usual gung-ho brazenness. The almost analogous nature of these tenacious little fish, barely understood and only discovered by chance, to me harkens a resonance with some of the indigenous peoples of the South American continent. It is all very tragic, or rather it has the potential to be. Maybe we were never supposed to find them.

Perhaps I have drawn my thinking out for too long on the subject, or maybe I have just had a deeper change of heart, but I am not confident. Hisonotus aky is, without doubt, the greatest enigma I have found in decades of fishkeeping, and as I agonise I find that I have only one fear: that I will try to keep them and fail. Perhaps I will let this one go.