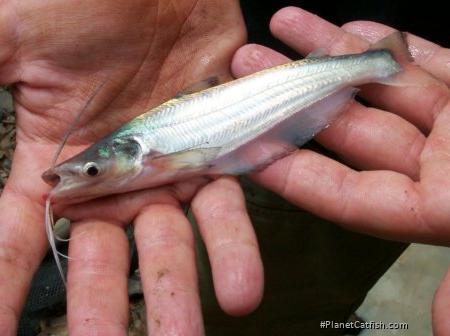 In his first CotM article, Daniel Konn-Vetterlein takes some time out from dealing with the pretty and popular catfishes in the hobby and introduces something with a bit of interest and intrigue - another "proper" oddball demonstrating again the immense diversity found among the organisms we collectively call catfishes. A gun metal grey mid-water planktivorous pimelodid anyone?

Hypophthalmus are not very well known. Even a well-read catfish enthusiast might not know what these fishes look like let alone have seen one swimming around. No wonder, they are anything but common. Pictures of them in an aquarium are rare and so is the knowledge about this fascinating genus of the much better known catfish family Pimelodidae.

They represent a very specialised group of fishes which is also indicated by the former, now invalid, placement in their own family, the Hypopthalmidae. This is where, until only the last decade or so, this genus used to be - in a family all of its own. Four species are described so far: H. edentatus, H. fimbriatus, H. marginatus and H. oremaculatus. H. oremaculatus is from the Rio Parana river system and little is known about it - we can only guess it has a spotted mouth from the scientific name. Distinguishing the other three species which are common in the amazon and Orinoco drainages is quite easy since they have unique characteristics. The caudal fin of H. edentatus is emarginate and never deeply forked. The inner pair of mandibular barbels is longer and thicker in H. fimbriatus while they are all same sized in the two other species, H. marginatus shows a forked caudal fin and a longer head profile than the rest. They show no pattern and are uniformly coloured in silver and grey.

In contrast to the big carnivorous species, Hypophthalmus don't feed on fish or even small mammals and amphibians. They are planktivorous, just like many whales. Another difference to the more common pimelodid genera is that they inhabit the pelagial instead of the benthal where most catfishes normally tend to live. Due to their food source, they live in the open water column. It is not exactly known yet how much zoo- and phytoplankton they feed on, but it would certainly be interesting to measure the quantities. Species showing this feeding behaviour normally have to feed on huge amounts to be able to gain the necessary energy to fuel their metabolism.

The feeding behaviour makes them very difficult to keep in captivity. I assume that they feed the whole day, so plankton has to be available daily at every time. Given normal circumstances this is impossible to provide. Freshwater plankton can be collected in lakes and slow flowing rivers, but the quantities will make it a full-time job for the keeper. Due to an older paper, dealing with the revision of the species occurring in Venezuela, we find they mainly feed on Ostracoda, Copepoda and Cladocera. But they are also known to feed on phytoplankton, depending on the species.

Back in 2012 I collected a possibly new species of Hypophthalmus in a Bolivian tributary of the Río Mamoré, called the Río Chipiri. It is a whitewater river, high in biomass production and full of plankton. In clear water rivers the concentration of plankton is not dense enough for these specialized fishes. To find food, Hypophthalmus use their three pairs of long barbels, stretch them and move forward. In H. fimbriatus from the Brazilian Rio Negro the inner mandibular barbels are thicker than in all other species. One may logically surmise this is possibly an adaptation to blackwater which is known to be less productive than whitewater. They are known from big rivers, lakes as well as from flooded areas like the Llanos in Venezuela for example. Little is known about their social life, but due to the fact that I never collected them in groups I assume that they don't live in groups, but alone.

Lopez-Fernandez and Winemiller (2000)* suggest that they don't share habitats usually. While H. fimbriatus only occurs in blackwater, H. edentatus seems to prefer flooded areas or lagoons and H. marginatus lives in creeks or rivers. Still it is possible, that the two last ones occur together (sympatrically). However, H. edentatus mainly feeds on zooplankton while H. marginatus prefers phytoplankton. This then provides a way they can live together without being influenced by each other (Carvalho et al., 1978) in terms of competition for food.

We may never see these fishes successfully maintained in the home aquarium, so I have enjoyed bringing them to your attention in another way.