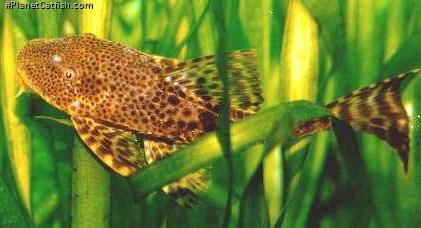 When a fish gets called a common this, or a common that, it usually leads to trouble. Commonality is a relative term. Take for example the fish we now call the Silver Dollar; now, aside from the fact that there a huge number of aquarists keeping this fish that have never seen a silver dollar (or even a dollar for that matter), the fish now sold under this moniker (Metynnis spp.) isn't actually the fish the name Silver Dollar was originally dreamt up to describe. For the aquatic trivia buffs out there the original Silver Dollar is Poptella orbicularis, but at the time it was most commonly available it was imported as Ephippicharax orbicularis.

Back to our "Common" pleco. The term common isn't appropriate at the present time. Due to changes in import patterns and more significantly commercial breeding, you will find for sale Sailfin, Snow King or multiradiatus-type suckermouths more readily (and more cheaply) than our Common Pleco. This fish is often referred to as Hypostomus plecostomus, a very similar fish which was previously known as Plecostomus plecostomus. Cosmetically, H. plecostomus is a darker fish with smaller spots (similar to that found on the head of H. punctatus) covering the whole body. The dorsal and caudal fin rays are not striped. It must be said that apart from that differentiation, I am unaware of other differences and literature seems to be in the same state of confusion as myself.

You may well have sussed by now that the generic term Plec or Pleco comes from Plecostomus. This has now spread to a general term applicable to any Loricariid. I suppose this is useful; Zebra Pleco is less of a mouthful than Zebra Suckermouth Catfish. The problem is that the term pleco now references fish that aren't even catfish! (i.e. Hillstream Loaches, Gastromyzon etc are known as Borneo or Hong Kong Plecos). Importers have a lot to answer for! Back to our "Common" pleco that started it all. Perhaps there is still some merit in being the "original". Even if it is unclear what the original actually was!

If you follow the aquatic newsgroups online, you will often find the aforementioned generic term referred to as pl*co. This quirkily charming practice arose from a cyber-superstition centering around a number of unexplained pleco deaths. Essentially when a given pleco was discussed via a newsgroup, the unfortunate individual fish perished. Fishkeepers being the superstitious lot that they are adopted the textual equivalent of coded whispering by referring to their beloved plecos as pl*cos to stop the curse. Quaint idea, but it really messes up search engines.