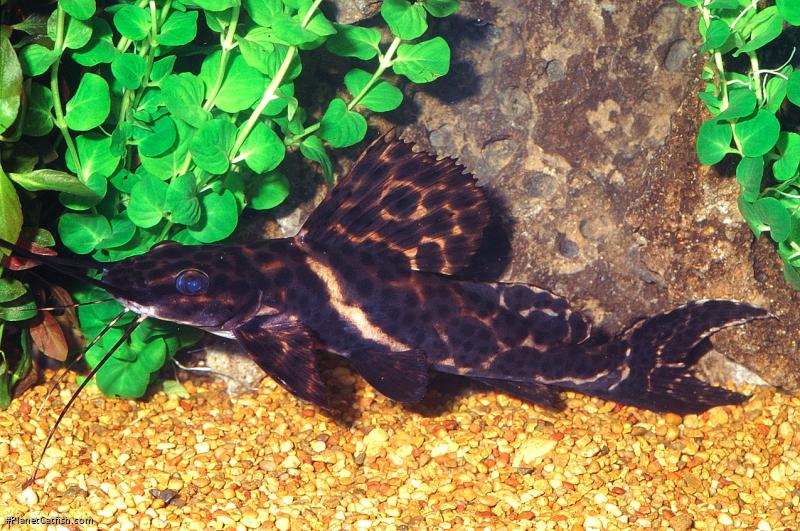 Chris Ralph returns from writing his first book on aquarium pufferfish to what is really his primary aquatic love at heart : big catfish. Many big catfish are unsuitable aquarium inhabitants, but as Chris explains, this one is big enough to classed a true tank buster, but small enough to be housed by a responsible aquarist.

The Sailfin Pim or Leiarius pictus is another of my favourite large catfish, which I currently have the pleasure to keep. At the moment I have one of these catfish housed within my 12' x 3' x 4' tropical pond. It has to be said that this particular catfish is a real character fish. I have had this catfish for almost four years now, after I was asked by my good friend Giles Barlow to rescue this fish from one of his customers' tanks. When I collected this fish it was approximately 16" long, it is now approximately 28" long, so as you can appreciate this is not a catfish for your average sized aquarium.

This catfish is sometimes confused with Perrunichthys perruno (Reticulated pimelodid) and Leiarius marmoratus (Marble antenna catfish). The overall body colour of L. pictus is dark brown with darker spots, with a lighter underside colouration. More noticeable in juvenile specimens this catfish has two pale bands, the first extends from the base of the dorsal fine spine toward the ventral fin, and then laterally along the body to the base of the caudal; the second thinner band lies parallel to the first originating from the base of the third to sixth soft dorsal fin rays. Large round spots can be seen in the dorsal, adipose and caudal fins, whilst the anal and ventral fins have much smaller spots. The barbels have a ringed pattern to them alternating light and dark colouration.

With regard to the anatomical characteristics of L. pictus the head is described as being narrow and flattish above. The upper jaw is slightly longer than the lower jaw. The maxillary barbels in adult specimens extend just beyond the dorsal fin; the inner mandibular barbels extend to the base of the pectoral fin whilst the outer mandibular barbels extend to the middle of the pectoral fin. In juvenile specimens the maxillary barbels can be seen to extend well beyond the tips of the caudal fin. This catfish has a large sail-like dorsal fin with 9 - 10 soft rays hence the common name of Sailfin Pim. The caudal fin is described as being deeply forked.

As mentioned above there are a number of differences between juvenile and adult fish, such as the fact that the barbells shorten in ratio to body size in adults, and the colour is less intense in adult fish. The lobes of the caudal fin are more rounded in young specimens whilst they are more pointed in adult fish. These catfish are real character fish, but can be noticeable territorial especially towards other pimelodids. My own catfish has a very understanding relationship with a large Oscar: if the Oscar gets in the way at feeding time, the pim will take the Oscar in its mouth and swim around the pond a couple of times before depositing the disorientated fish in one of the corners! A fascinating catfish to observe and an amazing site to see the barbels protruding from the surface of the water at feeding time. I am able to feed this fish by hand just as long as one of the larger doradids does not spook the fish at the same time. It is documented that Leiarius pictus suffer from claustrophobia caused by the fact that all too often these catfish are kept in accommodation where their maxillary barbels touch the front and back of the aquarium, thus stimulating both barbels at the same time causing the catfish to become confused! In this circumstance the report continues that these catfish will try to exit the aquarium, and it is therefore recommended that tight fitting covers be added to the aquarium. This does not appear to be a problem in my uncovered tropical pond!