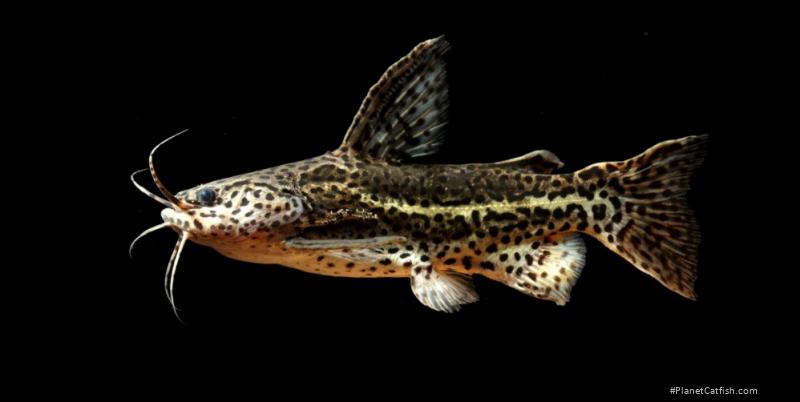 Birger Kamprath introduces this month's featured catfish. This is probably just as well, as yours truly had managed to erronesously add a species already this month, Cephalosilurus fowleri, which had already been featured several years ago. I guess that's a testament to the number of catfish of the month articles we now have, or perhaps it just highlights my bad memory. Either way, we're indebted to Birger for the article and to Marc Stabel for running his eye over it just prior to it's rather late publication.

This South American species has been known for a long time. Originally described as Arius oncinus by Schomburgk in 1841, it’s scientifically known today as Liosomadoras oncinus (Jardine & Schomburgk, 1841) and belongs to the Auchenipteridae family. This needs a short explanation. It was Mees (1978) who transferred Liosomadoras from the talking cats, Doradidae, to Auchenipteridae. Fowler (1940) had placed it into the Doradidae with the remark that “it’s unique in its family in the unarmed trunk and tail”. He did not mention the fact that Auchenipteridae are distinguished from Doradidae for exactly that reason. Mees doesn’t overlook the fact that “by placing Liosomadoras in Auchenipteridae it is unique by having the rasp-like postcleithral process”, but “the fact that lateral scutes are found in all Doradidae has been given much greater phylogenetical weight”[1].

Throughout its sometimes confusing scientific history, it has continued to retain the common name of Jaguar catfish due to its similar pattern to the South American Jaguar (Panthera onca). With a total length of 25 centimetres (9.8 inches) I would consider it a large fish for the average home aquarium. It has a stout body and large broad head which is reminiscent of a doradid. The body has an irregular pattern of black markings on a yellowish background, the fins have a sprinkling of dots and the underside is white. No two specimens are completely alike, yet within its distribution range - which covers the Rio Negro, Branco and Orinoco basins - all seem very similar. The Jaguar catfish is one of two species in its genus. The other, Liosomadoras morrowi (Fowler, 1940), has a smaller overall size, a dark body colour with even darker spots and is known as black jaguar catfish or false jaguar catfish.

According to its distribution range, Liosomadoras oncinus should really be kept in water with a pH ranging from 5.6 to 7.2. If I were to keep a larger group and consider attempting to have them spawn they would be held within that range. I like to keep things consistent in my tanks and although my water has a constant PH of 7.8 (for that is what most of my fishes are kept at), my Jaguars show nice colours, growth and normal behaviour so they don’t seem to have any problems with this. Temperature is also kept at a steady 24 degrees centigrade (74 F).

The first thing you will notice when a Liosomadoras is introduced into a tank is its disappearing act. It will find the darkest corner possible and stay there, it will dive into plants or cram itself into a crevice. The ideal aquarium should have many caves, driftwood and a few plants. Floating plants may be very useful to dim the lights. Placing the decorations in such a way that the fish can be viewed occasionally (with or — better — without the use of a small flashlight) would be a good idea.
Catching a Liosomadoras is simple. One just has to lift out the cave or piece of driftwood it is jammed into. This is better than trying to pry it out for it will anchor itself with its pectoral spines and won’t budge. Pulling or pushing will generally not dislodge it but is very likely to cause damage to the fish. Once out of the water it is not so reluctant anymore and will let go relatively quickly.

When choosing an aquarium one must keep in mind the size it could attain. Also, don’t be fooled by its inactivity during the day for it starts to roam almost immediately after lights out. Depending on the number of specimens being kept, suitable space must be provided for each. Once settled and comfortable with its environment it is a robust and very keen feeder. It’s always the first fish to arrive at the food and sometimes it seems to know when — and where - the food will hit the water. Pellets, flakes, fresh and frozen foods (like bloodworms, earthworms and prawns) are taken with relish. Because of that greedy appetite, Liosomadoras sometimes looks like a surface feeding doradid, stuffing itself to the brim. Feeding should be done at night or shortly after lights out as that is the time it will venture away from its hideout. Mine almost seem like they are pacing within their caves waiting for me to back off.

The name Jaguar catfish invokes a picture of a tough vicious fish that could handle itself in any situation. This often leads to the misunderstanding that it could be kept with boisterous and rough fishes. Yes, they do fight among themselves or with other catfish and sometimes even quite viciously, but these fights will mostly be over favourite hiding places and they really just prefer to be left alone. When harassed constantly they may just stay hidden, stop eating and eventually succumb to starvation or wounds. And because of their elusiveness and toughness, it may take you months to find out that there is something very wrong. To make things worse, they also have times that they simply won’t show up although there are no problems at all and there’s nothing for you to worry about.
One of their key defences is hiding, yet if there’s no possibility to do so completely there may be trouble. I have watched passing cichlids stop and pick at one of my Liosomadoras. Because of that, these cichlids were removed but if this could have gone on there would certainly have been severe damage.

Another interesting mode of defence are the stridulations made by rubbing the base of the pectoral spine against the pectoral girdle. This produces a foghorn like sound. I have one specimen that took over the favourite cave of a male Ancistrus. Every time the bristlenose tries to get back in I can hear the mini foghorn going from within the room situated on the floor above. Ideal tankmates would be other bottom dwellers that would not harass the Jags or shoaling fish that of course would be too large to swallow. These so-called dither fish may also help to make the Jaguar feel more at ease. A bonus to this is that it would give less patient observers something to see, as the retiring catfish would most likely be hidden.

Many are purchased singly, either due to a significant price or to poor availability. If given enough space Liosomadoras oncinus would make for an interesting species tank and if you are able to collect a group of them I think you would get some very interesting interaction. Also keeping them in a group would improve the possibility of mating and/or spawning activities, which would be an achievement.
Breeding has not been known to be accomplished in captivity. Patience would be needed to gather a group of these together and a large enough tank dedicated to them. I think it is a matter of time before someone reports spawning activity from Liosomadoras as I hear of more people becoming interested in collecting more than just a single individual. I myself find keeping a number of specimens from the same species to be more interesting as it enables me to see the interaction within the group.
Sexual dimorphism within the species is easiest to see by looking at the shape of the anal fin, there is a thickening at the anterior (forward) portion in males. This genital papilla is used for internal fertilization. However, this papilla shows relatively late on in Liosomadoras. You need specimens of at least 13 centimetres to tell the sexes apart. The thickened pectoral and dorsal spines won’t do the trick here, because they only show in sexually mature males, which will surely have their papilla by then.

All in all, a beautifully marked auchenipterid that requires a little patience at first. After some time however, the Liosomadoras will start showing itself which will undoubtedly make up for the trouble in the beginning.

[1] G.F. Mees, On the identity of Arius oncinus, Zoologische Mededelingen, February 1978
[2]  Burgess, An Atlas of Freshwater and Marine Catfishes, 1989