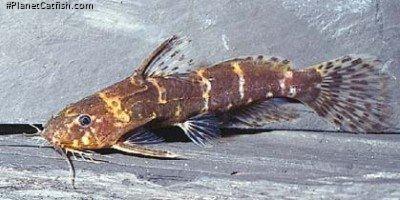 Once again we welcome in a Catfish of the Month article from Heok Hee Ng. Think of the family Mochokidae and the hugely popular Synodontis immediately comes to mind. However, there are several other genera of mochokid catfishes that are equally, if not more delightful, as aquarium fish and this month, we examine one such fish, Microsynodontis batesii.

There are four species of the African bumblebee cat: Microsynodontis batesii, M. christyi, M. lamberti and M. polli, M. christyi being considered a synonym of M. batesii. However, ongoing research indicates that M. christyi may be a valid species and has also shown the existence of numerous undescribed species.

The problem in the recognition of different species of the African bumblebee cat lies partly with color, which can undergo considerable change between juveniles and adults of the same species. For instance, the juvenile color pattern of M. batesii consists of a reticulate and somewhat spotty pattern of brown and yellow, to be replaced by a pattern of yellow bars in the adult. The African bumblebee cat can be distinguished from other Microsynodontis encountered in the aquarium trade (most notably the undescribed species from Nigeria) in having a much more elongate body. Microsynodontis polli, occasionally encountered in the aquarium trade also has an elongate body, but has a much longer caudal fin and lacks the distinct yellow bands of M. batesii.

My love affair with the African bumblebee cat began (as is the case with many of you, I'm sure) with a picture in a book. I finally had the chance to acquire my wish fish (not one but two species of Microsynodontis at that) after years of patient waiting. African bumblebee cats do best in water conditions similar to those for riverine Synodontis (soft, acidic water) and like many of their larger cousins, it is a very shy and retiring fish, and plenty of hiding places should be offered. However, they are particular about water parameters and seem particularly susceptible to fungal infections.

Feeding is never a problem as they will readily take all manner of prepared and frozen foods with gusto (it was pretty fun watching my smaller Microsynodontis zip around like nervous bundles of joy during feeding time). They swim with a sinuous, undulating motion (probably because of their longer bodies) unlike other mochokids, but like some Synodontis, the African bumblebee cat will occasionally swim upside down in search of food.

A very attractive catfish that has been somewhat underrated, the African bumblebee cat may not be easy to come by, but is a rewarding catfish that is certainly well worth the wait.