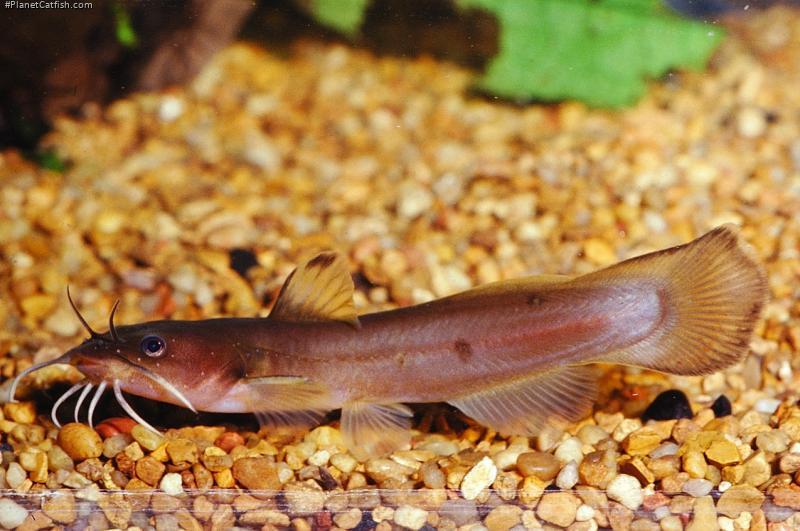 The catfish world is full of diverse and odd things. We're adding to that diversity in our co-written CotM for July. Scotland and Singapore come together to write about an unsung North American beauty.

As the halcyon days of summer return once more to the northern hemisphere, this is perhaps an opportune moment for CotM to focus attention on a member of what is probably the most eligible group of temperate catfishes for the home aquarium: the margined madtom (Noturus insignis).

Madtoms are the smallest member of the North American catfish family Ictaluridae. The fact that they stay small (unlike their much bigger cousins), have a somewhat catholic palate, and adapt easily to aquarium conditions, make them prime candidates for a coldwater tank. They are remarkably speciose, with 26 species described (and several more awaiting description) to date.

Whence the name “madtom”? The etymology of this endearing common name has been lost in the mists of time, but two contending theories are most often quoted. The first concerns the painful sting that these diminutive catfishes are able to inflict on the unwary, or perhaps uninitiated, angler or aquarist. Presumably, in days gone by, an unfortunate soul by the name of Thomas came off the worse in an encounter with one such catfish and the name aptly describes his reaction to the sting. Doubters of this theory may prefer the second that surmises the name comes from the frenzied swimming pattern of the fish (which is typical for many catfishes living in fast-flowing streams). When viewed from above they scoot around in seemingly random wavy paths, scattering like an electric shock special effect in an eighties Hollywood movie.

The margined madtom is a typical representative of this group. Neither large for a madtom, nor stunning in the beauty stakes (there are madtoms with even more drab coloration and those of striking beauty), the margined madtom is similar to the slender madtom (N. exilis) in having a black margin to the caudal fin, but can be distinguished from it in lacking pale spots on the nape and behind the dorsal fin base. Our margined feature fish also sports an upper jaw longer than the lower (the jaws are equal in the slender madtom). As previously mentioned, the margined madtom is adaptable to aquarium conditions, and can even do without a strong current in the tank (although their natural habitat consists of rocky riffles in clear, fast-flowing streams). Providing palatable food is straightforward and they will eagerly take all manner of prepared and frozen food, although one source does warn of problems in digesting some oligochaete worms (especially tubifex worms and earthworms). Because of its small size, the margined madtom makes an ideal tankmate for the coldwater community tank, and will coexist peacefully with a school of shiners, among other North American natives.

Reports of madtom breeding appear uncommon, but then, given how infrequently they are kept as aquarium fish, they're actually quite well documented. That said, it appears that most spawnings happen more by accident than by design. Nevertheless, it is still possible to induce spawning by a liberal feeding regime of mostly live foods (particularly insect larvae), extensive water changes, and a sharp drop, immediately followed by an increase, in temperature. One habit of madtoms that endears them to aquarists is their penchant for breeding in empty beer cans, so perhaps an empty or two of your favorite brew may be enough to do the trick. Hopeful breeders may have to try several brands just to get the right can shape for the particular species.

While you can take the last paragraphs final sentence in (at least partial) jest, the good old amber aphrodisiac truly does have its place as such in the catfish world too; at least in terms of providing a romantic retreat for the modern madtom. Prior to spawning, male madtoms will develop enlarged cheek muscles and can be counted on to guard the fry once they hatch. In fact, the similarities between, for example, bristlenose plecos (Ancistrus spp.) and madtom breeding regimes should not be overlooked.

Though one would not usually think of madtoms as food, bones of the margined madtom have been found in archeological sites with burnt patterns that suggest that the fish may have been roasted and eaten by Native Americans. In certain areas of its natural distribution, the margined madtom is also the most common bait species used by anglers to catch smallmouth bass, which are said to prefer madtoms to all other bait fish (commercially produced madtom-shaped lures are commonly available to bass fishermen).

With their bold patterns, peaceful nature and ease of husbandry, it is surprising that madtoms are not encountered more frequently in aquaria. In a sub-continent of millions of aquaria, with native catfish deeply interwoven with local culture, it is perverse yet perhaps comforting to find these fish blissfully ignorant of their own obscurity. If there is one group of catfishes considered to be the most overlooked for the aquarium, madtoms would be it.