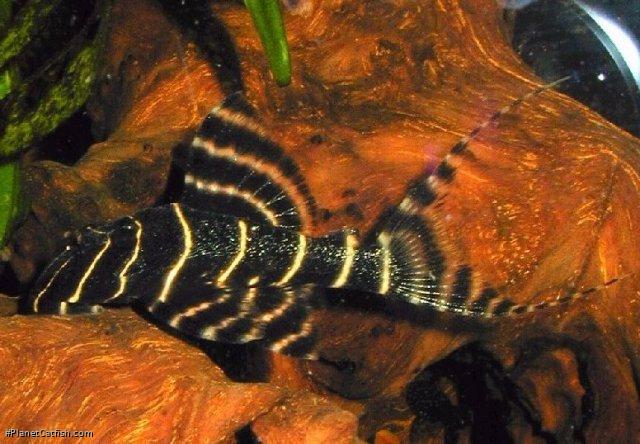 Rapidly emerging as one of the world's leading pleco breeding specialists, Planet Catfish regular and forum moderator, Janne Ekström gives us his experience in the husbandry and reproduction of this pretty l-number. Known also as the flash pleco because of its lightening strike adult colouration, it doesn't take a bright spark to work out this species has real status among the pleco faithful.

If the zebra pleco, Hypancistrus zebra, is the most sought after pleco then, to my mind, so this beautiful dwarf Panaque takes second place; although they turn a little dull and dark as full grown adults, they are very beautiful as smaller and younger individuals. With their dark chocolate colour and the golden thin lines slashing across their body they draw all attention from everyone that surveys aquaria containing these fish; they love soft wood both to hide and to eat and with their outlook they stand out like sparkling jewels sitting on the wood. 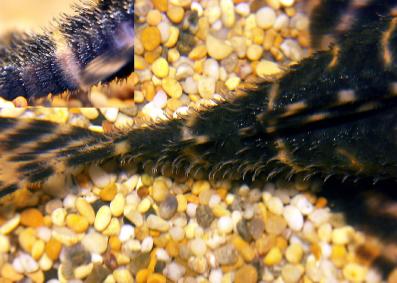 L204 originates from the Rio San Alejandro in Peru, this a smaller tributary of the Rio Ucayali near Pucallpa on the Andean slopes. Most rivers in the Amazonian lowlands flow with water that is very soft and acid but the Rio San Alejandro is different. It has a conductivity of around 200 µS (~ 5°dGH) and a higher pH level that we are used too when we think on South America rivers - a pH above 8 is what most aquarists think are common just in African rift lakes but in the San Alejandro the pH level can reach a level around 8.4! Also, and despite that this river is on the slopes, it is a warm river up to 30°C. This makes this species very suitable for many community aquaria especially when many people have these kind of parameters in their tap water. However, they are very adaptable and will thrive in a wide range of hardness 3-15 dGH and a pH level of 6.5-8.4 with good aeration.

The much coveted reproduction success in this species can be accomplished with some patience, they are difficult to sex before they reach a mature size (around 9-10 cm SL) when the males start to grow odontodes on their backs. Both sexes have interopercular odontodes of almost the same size except that males are slightly thicker; the pectoral odontodes are also small on this species so it is easiest to sex them are the body shape; females are much more rounded and stubbier compared with males. All that said, as soon as a male starts to grow odontodes on the back half of his body, there are no longer any doubts what sex they are. As with all Panaque species they need soft wood in their diet and they consume a lot of it, they also prefer wood as hiding places, selecting them before stones and don't show so much interest in caves before they are mature and in breeding condition; females have very little interest in caves and always prefer to hide among wood. Diets of vegetable and pleco tablets combined with frozen Cyclops are good food for conditioning and make the female become ripped with eggs. Then all that is needed for breeding is a suitable cave and high quality of the water with a high oxygen level. This more important then the precise water parameters. After that all you need is, of course, your patience. 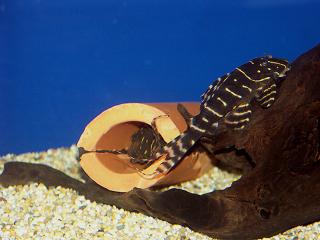 A pair prepare to spawn

A most interesting behaviour in their mating can be observed when a gravid female visits a male at his cave. I observed that they use their long caudal fin filaments to communicate; the male sits in his cave with the filaments sticking outside the entrance and the female lies close to the entrance with her back to the male. There positioned, both their filaments touch each other and in they can lie like this for hours. When she feels ready to spawn, the female enters the cave and they reproduce in the same manner as other species of dwarf Panaque that, as a group, they also share with Peckoltia species. The female doesn't stay in the cave for a very long time and they will have usually spawned the day after first entering. Maybe this is one reason they initially spend many days and hours in the position mentioned above. The female lays between 50 to 70 eggs and after six or seven days they hatch. The male is a very good father, he never leaves the cave fully meeting all his obligations to care for the offspring and keep them always at the deeper end of the cave. After ten days the fry have consumed their yolk sac and they start to forage for food, even at this small size they consume soft wood and together with pleco tablets they grew very fast in comparison to my experiences with other Panaque species. I suspect my other species in the same genus have appeared to grow more slowly because I have not added any wood before they have been around a month old.

The fry start to adopt the same colouration as the adults after around 20 days but have lighter lines crossing their body and these don't change before they reach around 4-5 cm; as fry and youngsters they look very similar and even if the adults share the same general outlook, not a single specimen has the same pattern as another. They can be everything from spotted with a few lines (which are rare) to very few golden lines and even almost totally coloured in dark brown, but most of the time we see them with the typical pattern as shown in my pictures.