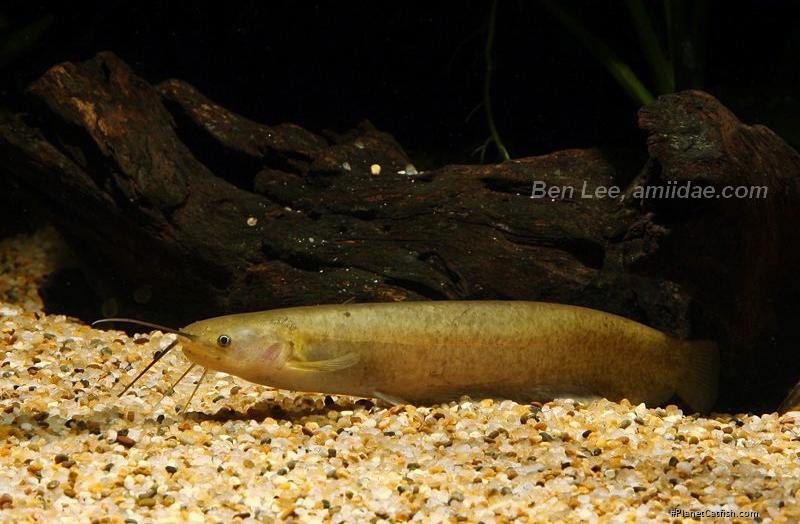 It has been more than five years since the last CotM dealt with a member of the family Siluridae (the last one to do so dates back to October 2006). This may seem surprising given that the Siluridae is one of the largest and most widespread Asian catfish families, but not necessarily so when you consider the number of silurid species one actually encounters in the aquarium trade. The subject of this month's article, a hillstream silurid that is sometimes encountered in the aquarium trade, hopefully alleviates this under-representation.

Most silurids tend to have compressed bodies and are usually found in slow-flowing rivers or swamps, but not so members of the genus Pterocryptis, which tend to have long, cylindrical bodies and are found primarily in hillstreams (or at least in streams with a current and a substrate of large rocks and gravel). The long, anguilliform (eel-like) body form probably enables the fish to easily make its way among the crevices between the rocks making up its substrate (a region where the fish can easily hide from predators and where it can avoid the bruising effects of the strong hillstream currents). Otherwise, Pterocryptis is relatively unremarkable, having neither a striking color pattern (members of the genus are brown or mottled brown) nor much of an appealing morphology (they lack the wolfish appearance of the larger predatory silurids).

Pterocryptis berdmorei is one of the more widely ranging species (it is known throughout much of Myanmar southwards to the northern Malay Peninsula) that occasionally surfaces in the aquarium trade. I managed to obtain a trio of juveniles from a local aquarium fish exporter that I plunked into an all-too-small tank in my office. Given my less than stellar experience with hillstream fishes, I did not think that they would last very long in the densely planted tank, but I was pleasantly surprised to find that the trio not only alive after three years, but also about three times bigger than when I first had them. Unfortunately, I had to vacate my office and break down the tank, which promptly ended my last catfish-keeping experience. I gave them away to colleagues in the museum, knowing the eventual fate for them was to end up pickled in a jar.

I found that successfully maintaining P. berdmorei in the aquarium did not require replicating their hillstream habitat. My fish seemed perfectly happy in a densely planted tank, with little current, as long as the water was kept relatively clean and temperatures were kept moderate (not a problem, given that the tank was sited inside an air-conditioned office). It was easy feeding them too, as they would readily take all manner of frozen and dry commercial food. However, my trio did disabuse me of the notion that conspecifics would play nice with each other, since I had assumed that they would behave much like Silurichthys (the silurid catfishes most closely related to them). I observed considerable bouts of nipping, which ultimately resulted in tattered fins and scratch marks on the body for the loser, but I have only myself to blame for the situation, having put them in a 20-liter tank that was too confined.

I also discovered that their catholic diet included tankmates small enough to eat when I added a few contaminant tetras (mainly Hemigrammus) to the tank and watched their numbers dwindle over the course of a week (there was nothing else big enough to eat the tetras in the tank, save for the Pterocryptis, so I'm pretty sure they were the guilty parties).

It's been about 24 months since I last maintained an aquarium. You may think that my experience with P. berdmorei would turn me off, but if I could start over, I'd pick these as the catfish to keep in a heartbeat.