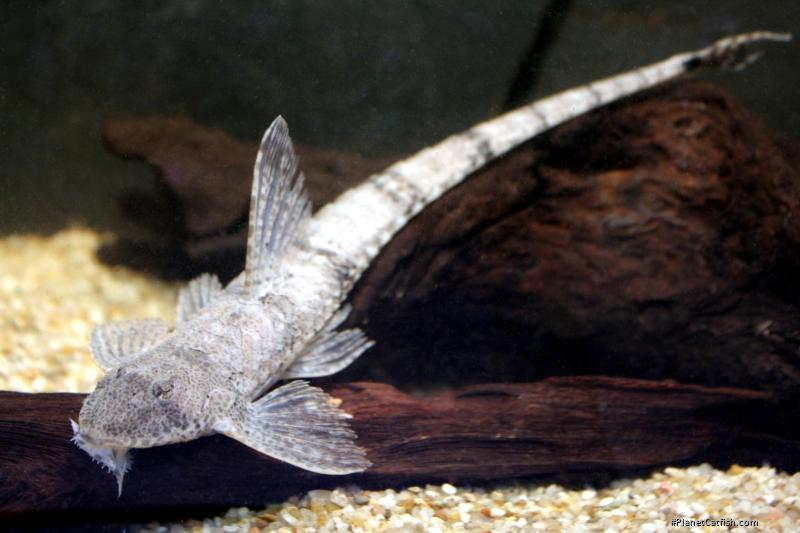 Hitting a rich vein of form, we continue to be very happy to have Erlend Bertelsen bring us a great article on a pretty whiptail from the blackwaters of Colombia as Erlend now explains.

Let me start this catfish of the month text with a little secret about myself. I simply love the Asian arowana; Scleropages formosus and as I write this, I am the lucky keeper of two. There is something magical, mythical, and special about this fish. It is simply beautiful, and the species name formosus also relates to that. Some sources state the use of the word originates from the Portuguese Ilha Formosa meaning "beautiful isle" an old colonial name for the island of Taiwan (where that species does not occur) and so it is more likely in reference to the "beautifully green" body with orange-yellow fins of the first colour variety described. When we look at scientific fish names, we can occaisionally find the different forms of Formosa being used. And the fishes they belong to always have one thing in common; they are beautiful. Rineloricaria formosa is no exception.

There are some fish species you feel more connected to than others. For me I feel very connected to Rineloricaria formosa, because I have collected it in its natural habitat, and I have successfully breed it back at home. We collected the fish in a sandy beach along the Rio Atabapo (Colombia) close to the connection to Rio Orinoco. The biggest we got was around 15 cm TL. And I have to say I was impressed with how spectacular the fish looked in the wild. Sometimes the fishes you collect in the wild have this magical "shine" you never manage to see under aquarium conditions. It's probably something to do with the water parameters and I also believe the blackwater. After seeing it in the wild I can totally understand why Isbrücker and Nijssen described it using the specific name formosa when they described it back in 1979.

The eyespot it has on its back, just behind the eyes, is also much more noticable in freshly collected specimens. Even though other Rineloricaria species have this eyespot, this is probably the species where it the most prominent. I assume the eyespot is a defence system trying to make confuse attackers. Although otherwise closely similar looking to Rineloricaria meleni, it differs in colouration and marking on the spots. But when we look at distribution, its natural to think that they are closely related. Rineloricaria formosa is distributed in the Rios Orinoco, Atabapo and upper Negro. Rineloricaria melini is from the Rio Negro drainage and is common in the lower reaches of that system.

In captivity it is as many of the Rineloricaria species, that is to say straightforward, and not difficult to keep. If you want to keep them you should give them an aquarium with a nice big area of open substrate. I keep my group of eight adult fishes in a custom made aquarium that has the bottom area of 207 x 50 cm, and the height is only 30 cm. The substrata should be fine sand, as the fish like to hide, and sometimes dig down in it. My fishes are also in an aquarium that has a very strong currents, but I don't necessarily believe this is very important. Since this tank is placed highest up in an aquarium rack it also has a higher temperature. And it's not uncommon that the temperature is around 29°Celsius, the fishes seem to accept that high temperature happily. When we collected the fish in Rio Atabapo a summer day in March, I remember the extreme temperature we collected in the mid-day! The fishes were collected in a water depth of nothing more than 30 cm, and I assume the temperature is way higher than 30°Celsius.

Even though it's a blackwater fish, I have managed to successfully breed it in more neutral water. pH 7 has worked fine for my fishes. It's easy to tell the sexes apart when they are sexually mature. Males grow "hair" odontodes on the top of the head (Mohawk style). This is actually quite easy to see. As many other Rineloricaria species they breed in a cave that must be open at both ends. The cave my fishes prefer is round, and the opening is 2 cm in diameter. I always see more activity around the cave before the breeding, and a cold-water change may be a triggering factor to make them breed. With some experience they produce 40-70 green eggs. They hatch after the male have cared for the eggs 5 to 6 days. Before hatching I move the cave with the male to a separate container that floats in the top of the tank. They have an air-stone to give them some movement in the water. I provide some oak leaves for hiding, and they also use it as food to some extent. After hatching I move the male and the cave back to the main tank. They have a small yolk sac the first days, when that is used up I feed with a small powder food. Feeding and caring of the fry is quite easy. It is important to remember to change water and to keep it clean. I have read that this fishes sometimes are considered as a more difficult fish to breed since it's black water specie, but my experience is not this. My fish group is wild caught fishes, and they breed in my tanks under neutral water parameters.

I like my Rineloricaria formosa and they do live up to the Formosa name as they truly are some beautifully fishes.