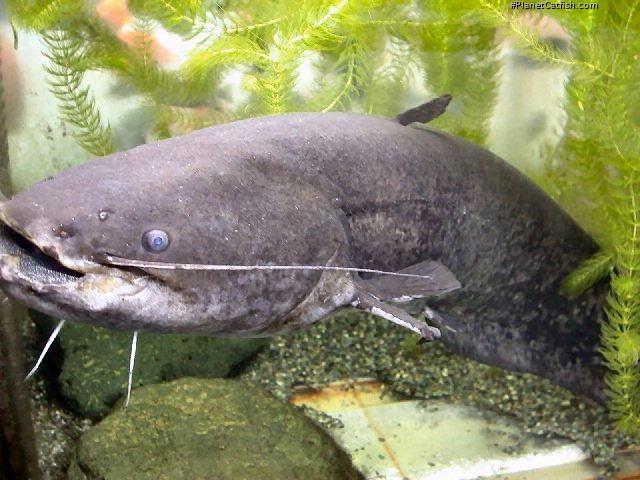 It's a new year and what better way to start the first month of the year than with an article featuring the First Catfish, S. asotus. Why First Catfish? This is because S. asotus is the first catfish species to be described in Linnaeus' "Systema Naturae", the father of all taxonomic works. This first formal description of a catfish is exceedingly brief and reads: "Silurus pinna dorsali unica, cirris 4" (or "A Silurus with one dorsal fin and four barbels").

Perhaps less widely known than its more familiar European cousin, the wels (Silurus glanis), S. asotus is one of the most widely distributed of all East Asian catfishes, being found throughout much of Japan, China, Taiwan, Korea and eastern Siberia. S. asotus looks like S. glanis at first glance, but differs from it in having only two (vs. four) mandibular barbels and fewer anal-fin rays (74-86 vs. 90-95). Like all members of the genus, S. asotus are solitary, lurking predators, spending much of the day hiding amongst vegetation or in crevices (maybe sometimes to ambush passing fishes) and coming out at night to actively hunt prey (seemingly by tracking their wakes). They are fairly easy fish to maintain (at least in terms of water conditions, but definitely not in terms of tank space), although like many silurids, they are sensitive to high ammonia/nitrates.

S. asotus is widely sold and cultured as a food fish in east Asia, and perhaps because of this, much is known of the spawning behavior of this species. Like many other east Asian Silurus species, the spawning behavior of S. asotus consists of a fixed series of stereotyped behaviors (in what is known as a "rigid reaction chain"). First the male chases the gravid female, who selects a suitable place to deposit her eggs. Once the nesting site is found, the female stops and the male swims in front of, or beyond the female's head. The male proceeds to curl his caudal peduncle alongside her head and enfolds her head with it, vibrating his tail at the same time. In some spawning instances, the male slips backwards until his abdomen and tail encircles the female's abdomen (at other instances, the caudal peduncle and tail remain firmly wrapped around the female's head). Wherever he is enfolding (the head or the abdomen), the male then begins to apply pressure, squeezing the female while vigorously shaking his head. The female begins thrashing her body and shifts the male rearwards, before throwing him off with a quick flip of the back and a turn. The pair then circles the nest site several times, before moving on to the next site and repeating the performance. It is not clear when the eggs and the sperm are released, but this apparently occurs at the moment the female throws off the encircling male. 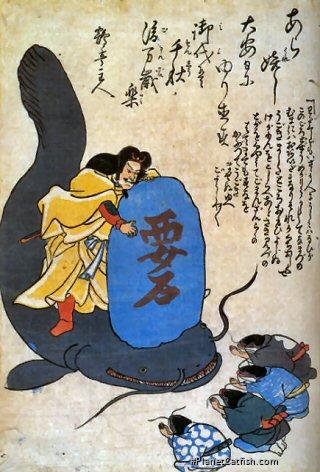 The large size and the aggressive nature of the fish have spawned much folklore around it, none more so than in Japan, where this is probably their largest freshwater fish species. The Japanese folklore that surrounds S. asotus is rich and diverse, and one article is simply not enough to cover all of it (in fact, catfishes in Japanese folklore have been the subject of several scholarly works, including at least one book). Some of the other lore will be covered in a later article dealing specifically with this topic, but one of the most evocative tales, which is narrated below, stems from the mid-eighteenth century and involves giant catfish and earthquakes.

The Namazu (the Japanese name for Silurus) is a giant catfish that lives in subterranean waters deep beneath the earth. On its head rests the kaname-ishi, a giant stone that resides in a shrine in the city of Kashima (near Tokyo) [because of its geographic location, the stone is often erroneously referred to as the Kashima stone]. The purpose of the stone is to pin the catfish still, but the weight of the stone alone is not sufficient for that. The Kashima Deity (Kashima daimyojin) must assist by pushing down on the kaname-ishi. The Kashima Deity sometimes falls asleep, is distracted, or has to leave for a meeting (in which case the deity Ebisu fills in, but Ebisu is frequently lax). Whatever the case, these lapses in vigilance cause the pressure on the namazu to be relaxed, giving it some freedom of movement. The thrashing of the namazu would result in an earthquake, the intensity of which depended on the vigor of its movements. Eventually, the earthquakes would subside and it was deemed that the Kashima Deity was back in control of things. The image (left) shows the Kashima Deity back in control of the Namazu after his temporary lapse, and all the lesser namazu (aftershocks) bow down in submission.

At the time of publication, it might at first seem insensitive to run with this particular catfish species for this month given it's folklore links with the monumental tragedy unfolding around mother natures show of force in the Indian Ocean; yet to hide from such widespread devastation is perhaps a greater wrong and, as webmaster, I'd like to conclude Heok Hee's article with truly heartfelt sentiment that's hard to carry off using the online medium. I'm sure all readers will understand that this is our way of standing shoulder to shoulder with the many hundreds of thousands of people directly affected by the worst natural disaster in living memory.

They are all in our thoughts.