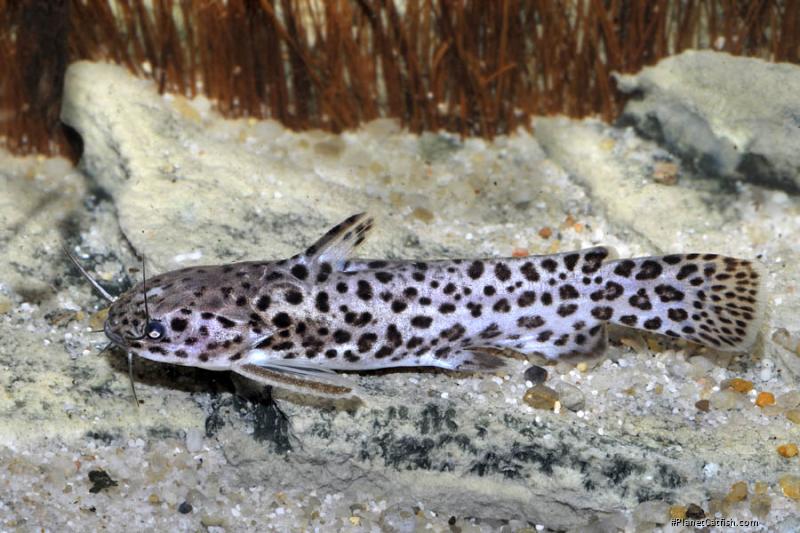 In what is surprisingly his first CotM to date, we are delighted to have Erlend Bertelsen bring us fully up to date with the newly named "other jaguar woodcat" and his long term observations on its care.

In the last months of 2019, Spinipterus moijiri got named, and it is still difficult for me to get use to the new scientific name. I still refer mine as Spinipterus sp. "Otorongo". Otorongo is Spanish and means Jaguar and the pattern of this catfish has great resemblance to that of the big cat. These small, fascinating and shy fishes have also really managed to put my patience to the test.

When I write now, January 2020, I have kept my fishes for seven years, and regularly they have produced fertile eggs for the last three years. If I take a wild guess, I will say that I probably have managed to hatch 1500 eggs! And if you ask me how many fry I have managed to grow out; I can only answer two! I only keep one of these today. Due to the recent description of the fish, and the fact that I managed to successfully grow up a nice youngster to a good size, I think that it is mine time to write the first CotM article for the 2020.

My first experience with eggs from this fish was an interesting one. I had three species of fish together. The blue Peru Tetra, Boehlkea fredcochui, the Peruvian Banjo catfish, Bunocephalus coracoides and Spinipterus moijiri. The tank was only a 63-litre tank furnished with some wood and loads of java moss (Taxiphyllum barbieri). I would guess that the moss occupied around 75% of the tank. After cold water changes, I always found the Banjo catfish in the moss the next day. So, when I found some eggs after a cold-water change, I was sure that the Banjos were the "guilty" party. The first time I found eggs was some days before I was leaving for Germany to visit some fish experts in the Frankfurt area. I did of course ask the question concerning who was "guilty" of producing eggs in my tank? And after some discussing (and loads of beer) the most concluded that the Blue Peru tetra was the "guilty" one. And to defend my German fish friends, they concluded this without seeing the tank, having not seen a picture of the eggs and do not forget that we did drink quite a lot of beer while getting to our conclusion. After coming back to hatched eggs and some of them developed into tiny fish, I could very quickly say that this did not look like tetra fry. So, I concluded that my banjo catfish were the ones that wanted to produce their next generation. Around three months after my first experience with the eggs I was visited by my German friend Daniel Konn-Vetterlein. I am not sure how big the fry were when he saw them, but he was sure that these were Spinipterus fry. I think then that I did not want to believe him, but after a while when I managed to successfully get a fish from fry to a semi adult, there was no more doubt.

Firstly, I think I need to say that I do not necessarily believe that this fish is extremely difficult to breed or raise. For me, it is more that it does not match my way of living. I work shifts and sometimes I do not manage to visit my fish room for about 40 hours. The fry need a lot of food and clean surroundings in the first stage of their life and due to my work and other responsibilities, I simply do not mange to provide them with what they need. After successfully hatching many hundreds of eggs, I still today have trouble with feeding them up. As I told earlier, I believe that the amount of food and the cleanliness that follows such a regime, is more than I can provide. And this is my main problem. The production of eggs is constant and they hatch without trouble. I mostly hatch them in an egg tumbler, after the fish have laid their eggs following a cold-water change. The eggs resemble a Corydoras egg, with a hard shell. The eggshell is clear and it is easy to see the small embryo inside. I can easy pick out 40 eggs, but I know that it is even more if I have time to look. They are placed one by one, all around in the moss. But I have never seen the egg laying myself. However, I am quite sure they are laid in the pitch dark. After the eggs have hatched, I look in the filter, and always manage to save some more fry out. They normally take between five or six days to hatch in 26°Celsius and a pH around 6.5. I feed with live brine shrimp and microworms as often as possible, and I have found that the "Tropical Pro Defence Micro" has worked very successfully in the first stage of the development.

Back in 2006, I collected what was to be the first described Spinipterus, S. acsi, in a tributary to Rio Ucayali in Peru. I managed to bring some back with me, but after some years I lost them one by one. The last fish I had left, I offered to science and sent to Dr. Mark Sabaj Perez and it is now in The Academy of Natural Sciences in Philadelphia, USA. Sadly, this, the only other species of Spinipterus, is very uncommon not only in science but also in our hobby. I find the small so-called woodcats in the family Auchenipteridae highly fascinating, and I guess many of them also should be possible to breed with great success. Even if they already have a hardcore fanbase, I strongly believe they deserve a much bigger one!