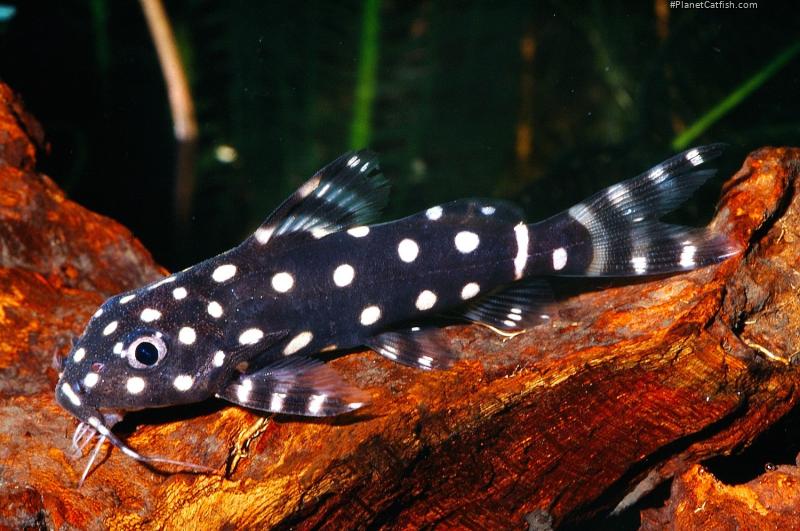 I first saw this fish in a book called "The Complete Home Aquarium", which is sadly, now out of print. This was my first larger fish book and it accompanied me on many visits to fish shops with pretty much anyone I could talk into accompanying me (I was just a little to young to wander around the city unescorted). This book has long since gone the way of all flesh, but I can vividly remember within it a photograph that showed our Polka Dot and a Pyjama Catfish (Synodontis flavitaeniatus) sitting together on a rock. At this time there was no such thing known to the hobby as Galaxy or Gold Nugget Plecs and the polka dot colouration was very unusual. Then, only the Spotted Talking Catfish (Agamyxis pectinifrons) and juvenile Tropheus sp. (Tanganyikan Cichlids) were possessed of anything close to a polka dot colouration. Along with the then extreme rarity of these fish, this kept the price limit well out of my (pocket money's) reach. This photo of these two fish together became near legend amongst my young fishkeeping friends. As time passed I often thought that I would dearly like a copy of that book, only in 2003 did I find an old copy at an aquatic auction.

Anyway, back to a time when I was in my mid teens, I walked into a local fish shop and for sale were a number of Synodontis that I had never seen alive before. These included S. alberti, S. afrofischeri, S. brichardi, S. decorus and S. longirostris. And there, side by side in two tanks were a Polka Dot catfish and a Pyjama Catfish. I tore my eyes away from these beautiful fish to fearfully look at the price. The fishes price had dropped ten fold since my initial enquiry years ago. Working part-time (still being at school) and had slightly more capital at my disposal, I bought the Polka Dot there and then and asked the dealer to keep it until I could mature a tank. The friend with me at the time bought the Pyjama Cat. What excitement followed as we jabbered effusively on the bus ride home!

This black and white angel I bought was only about 1½ inches long and was kept at this size in a community aquarium with largish tetras, Corydoras and, I think, Banjo Catfish (Bunocephalus sp.). It thrived and was transferred to a South American Cichlid tank where it grew to 4 inches. It got along well with Clown Loaches (Botia macracanthus) and the Thread-Fin Cichlids (Acarichythys heckelii) present. To this was later added some Demon Fish (Satanoperca daemon) and a Blue-Eyed Plec (Panaque sp.). I resolved a bitter dispute between the Blue-Eye and the angelicus by adding another large cave for the Blue-Eye who was not keen on cohabitation whatsoever! All lived peacefully for around 2 years when I moved the tank and sold most of the fish.

The picture left shows a particularly well marked young fish. Some specimens I have seen possess more yellow than white spots and the dark colour can range from dark grey through an inky purple to midnight black depending on mood, health, age and sex of the individual. The images shown here demonstrate how the colour pattern can vary between individuals, all are adults showing a greatly differing number of spots yet maintaining the solid black basic colour. Perhaps even diet and water conditions affect the darkness of basic colour? Finally, a sub-species S. angelicus zonatus is mentioned and pictured in some older literature. This fish has white vertical bars in addition to the polka dot pattern such as the fish shown below. Currently this regarded as invalid and that it is merely a colour variety and not deserving of sub-species status. In my experience I would go further and say it is only exhibited on young fish. As they age the stipes thicken and split like amoeba into increasingly regular, circular spots.