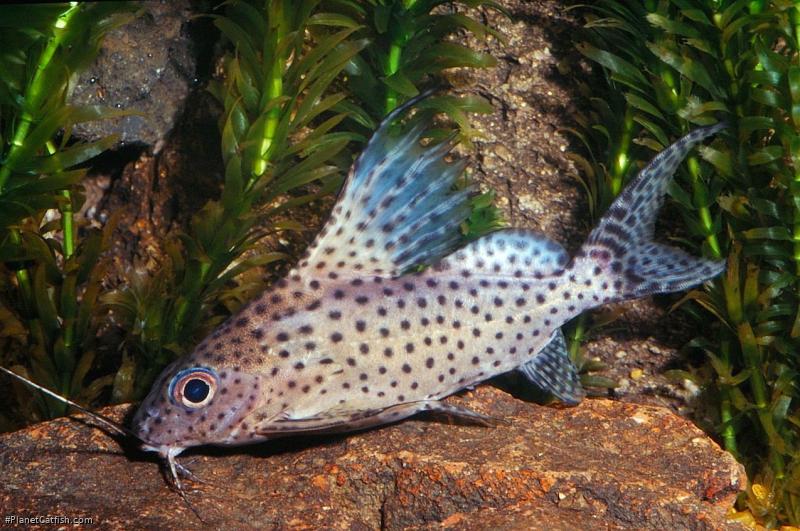 The fish pictured here may appear quite different from each other, do not adjust your sets! The fish below however displays the blotchy spots and tail stripe patterning of the juvenile form of this fish. The adult pictured above displays a regular spotted colouration, the brown or grey background colour is constant throughout the fishes development. 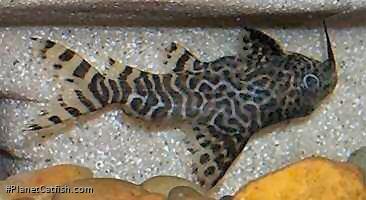 At one time I kept five Synodontis eupterus and was raising them together in an attempt to learn more about their behavior and (hopefully) reproductive habits. Unfortunately around that time I had to make a few difficult decisions about which fish to move to my tanks at work and which to sell. Basically I kept fish that would be hardest to replace for one reason or another. The Featherfins are relatively easy to find and so went on the "for sale" list.

On a positive note, I kept these 5 individuals for nearly a year and grew them up from less than 2" to the largest which, when sold, was at least 6" standard length with the magnificent dorsal fin extensions found in this species of Synodontis. I also learned about the social habits of these fish among their own species. One reason that so few catfish have been bred in the aquarium is people tend to buy individuals and collect as many species as possible rather than collect the same species. Also, many catfish available to the aquarist are too big or territorial to house a number of individual under the same hood.

If the care of a rare or new fish is undocumented then it usually makes sense to initially purchase an individual in an attempt to keep it alive and learn about its preferred diet, habitat etc. However with a well known species like Synodontis eupterus, the next stage is surely understanding conspecific interaction and, ultimately, breeding requirements. This seems to be the aproach taken by current day aquarists and has seen many new species of catfish spawnings being recorded and reported. Happy days.