Did you know fantastic help is an anagram of Planet Catfish? This forum is for those of you with pictures of your catfish who are looking for help identifying them. There are many here to help and a firm ID is the first step towards keeping your catfish in the best conditions.
Post Reply
21 posts

When I bought him I thought he is an albino version of the commonly sold (and cheap) Mystus mysticetus. He was like $5.

Hemibagrus nemurus I think. Does the caudal fin have filamentous extensions???

If it is, you should be delighted. It goes well with your signature.

Thanks Balaji! I think you are right. It looks awfully close to the Cat-eLog pics. Yes, there can be seen some extensions - they are small and barely visible on the Cat-elog pics too... and not all of the pics show the extensions either.

I had a feeling it might be one of the larger Bagrids but your ID does indeed delight me. If the ID is right, I don't know why it is growing so slowly - I'd expect at least a foot in the first year. 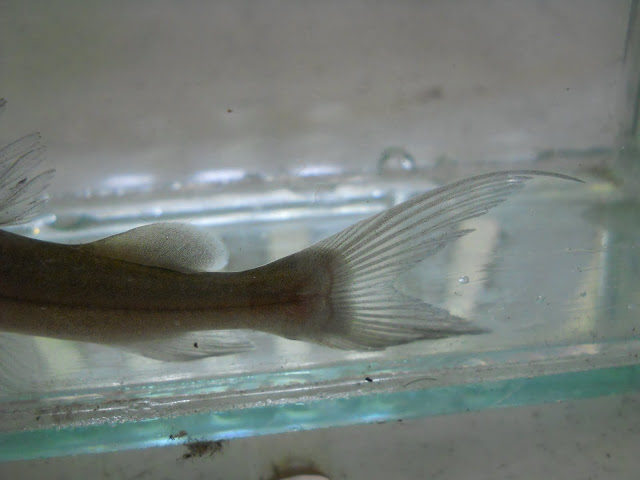 The specimen I used to keep did have the extensions. Is it not aggressive??? I kept mine alone.
Balaji

When it was small and in a tank, I did not see any signs of aggression from him. When he's been in a big outside pond for 1.5 years, he always had his corner/spot and usually was alone in it but I have never seen him chase any other fish out of it... or even in general chase any other fish. He looked like a meek loner.

My channels grew from 5" to 1.5' and 7 lbs in the same 1.5 years in the same pond. There were Zungaro zungaro and TSNxLeiarius in the pond (both ~15"). There was a blue channel cat, ~ same size as the channels; three fully grown 10" Chrysichthys ornatus, two other fully grown ~10" Chrysichthys, which look like Chrysichthys sp(3), a fully grown walking cat, five 10" sun cats (http://www.planetcatfish.com/forum/view ... =4&t=36786) but this guy never had any damage, not a scuff mark from what limited observations I could make. So, I assume he has held his own pretty good.
Thebiggerthebetter
Top

I guess the size and demeanor of the tankmates made him behave.
Balaji

I think he is still too small. Was yours aggressive at small sizes? (You gave him away, if my memory serves, right?)

All my wykiis were the same way. Even when they grew to 1.0'-1.5' I didn't see them being aggressive towards other fish in my pond in Rochester, NY, only towards each other. They defended themselves superbly from far bigger and predatory TSNs etc.
Thebiggerthebetter
Top

Yup. I dropped him in a pond. I never kept mine with any other fish as I read about their aggression in multiple places. I don't think the Mystus would have survived. I did see some lovely Hemibagrus wyckii or H.wyckioides here a few months ago.
Balaji

I think aggression in Hemibagrus is a function of the size of the enclosure they are kept in. In a large enough system (e.g. pond), they would be typically less aggressive, since they would have less of a need to defend their territory.

Thanks, HH. It would appear to me that the territories of my two wyckiis were but two halves of a 10 gal clay pot in my 40'x6'x3' pond. Yet, they would almost never come out of there in my presence how ever (in)discrete...
Thebiggerthebetter
Top

Shovelnose wrote:The specimen I used to keep did have the extensions...

Mine has the extensions too, I can see now that he is in a tank. And beautiful snow white edge on its adipose. And elegant white spotting on his pectorals. I'll try to get more good pics. For now, he can be seen in Tank 1 (6 videos): http://www.planetcatfish.com/forum/view ... &start=180 (page 10)
Thebiggerthebetter
Top

Well, good pics I have failed to get. Here is the best so far. He is still at ~1'. Has been for ~5 years. Not growing anymore but feeds quite well on both dry and flesh.

A couple more shots in 240 gal. Sorry, the quality is still bad, no time to play.

It's been very easy to feed. A good tank mate, nothing of the wyckii or wyckioides kind. Grew from 2" to 1' in about 1.5-2 years and stopped completely there. It's been 4 years or so since it remained the same size. They are farmed in Asia and it looks like my farm boy (or girl) is a cull, failing to reach its supposed max size of 2'+.

It's very relaxed and likes swimming around day or night and checking everything out. Quite active, again in complete opposition to wyckii and wyckioides.

In the 7 years I've had it, I saw it eat a 3" koi once when they were in a 1500 gal pond. Never before nor after has it done it, although it could. In the same pond I saw it chase other fish from its spot (that was ~3 years ago) but the spot was small and the chasing was not vicious and everyone complied anyway. Funny enough, it has not done the chasing ever before or after, again. It ate the koi exactly the same time. I think it had an episode. Maybe a teenage meltdown that came and went.

It has been in a 4500 gal for a year or more now, a model, upstanding citizen, not a scratch on it but never fighting anyone else. The activity you will see here is typical. It also takes rests in the center on the bottom in between these rather energetic swimming laps.

I've long thought that Hemibagrus aren't aggressive fish if you give them enough room.

Thanks, HH. Even wyckii and wyckioides? I thought I was confined to keeping my wyckioides, currently at 16", alone for life.
Thebiggerthebetter
Top
Post Reply
21 posts