A historical forum for issues reported in the suggestions and bugs forum that have been subsequently fixed or resolved.
Post Reply
13 posts • Page 1 of 1

I was looking through some of the photos of the species of Ictalurids listed here and I am pretty sure that at least most of the photos on the Ameiurus serracanthus page are actually just the southern mottled variety of Ameiurus nebulosus.

I recalled that when Dr. Brooks Burr spoke at the 2016 All-Aquarium Catfish Convention, he said that they could be distinguished by a dark blotch on the dorsal in A. serracanthus. I don't see that blotch present on any of the pictures in the CLOG. It can be seen in the image and described in the notes on the Florida Museum of Natural History page here.

None of the pictures are really clear enough to get a look at pectoral spine serrations, which would be the better diagnostic feature. Without serration counts, I'm not certain that the less clear pictures are definitively not A. serracanthus, but I feel pretty confident that pictures 4 - 12 are A. nebulosus. I've kept this color morph of A. nebulosus before and these fish are identical to the one I had, and all lack the dark dorsal blotch.

Looking at the images of live specimens in my copy of Fishes in the Fresh Waters of Florida, the pictures for A. serracanthus and the mottled A. nebulosus look distinctly different in head shape (especially eye size and placement) and spot pattern. If these traits are consistent across the species, I don't think any but the first image could possibly be A. serracanthus, and that one I am only uncertain of due to the condition of the specimen. Going by the images in this book, it would more closely resemble Ameiurus brunneus than either of these species, but the specimen in question looks potentially stunted and has very ragged fins so its hard to say without being able to look at pectoral spines, which would again be the clear diagnostic feature.

The CLOG currently has no mention on the A. nebulosus page of the southern mottled color morph, so I think moving some images to that page and including a note about it might help with misidentifications.
Huge fan and collector of Bagrid catfish.
Studying to become an ichthyologist.
Top

Here are illustrations of the two from the recent update on N. American catfishes: viewtopic.php?f=14&t=49502

Yes, the dark spot in question can be seen in the illustration of A. serracanthus there, though I find it less easy to identify than on actual specimens.

The A. nebulosus picture you've posted is from Arkansas. Its certainly a more mottled fish than northern nebulosus, but in Florida where both species occur and where I am from, the mottling is even more distinct. Here are images from the book I referenced, which uses live specimen pictures of both species and has A. nebulosus in the local color morph I am referring to. 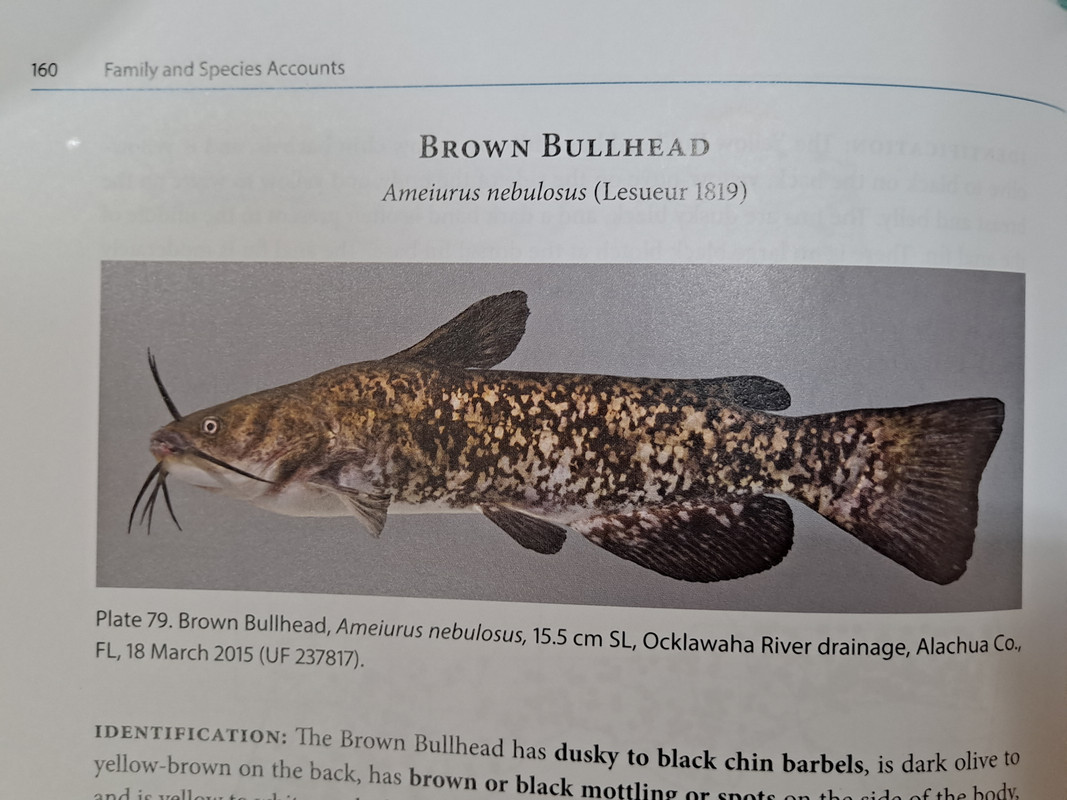 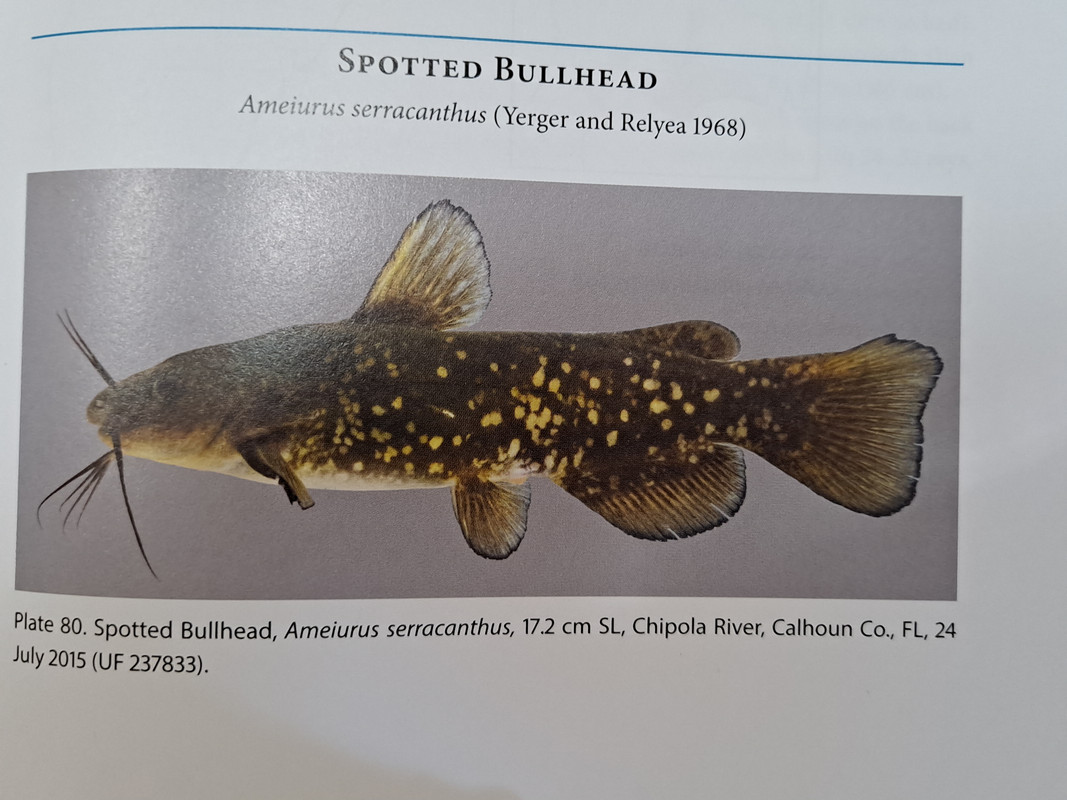 For reference, these are from:

Thanks, Narelle, these pics are helpful. IDK if what I'm seeing is consistent between spp., or just differences that are unreliable due to age/size, but as you mentioned there are distinct differences in the head.
1) eyes are smaller in nebulosus
2) mouth is terminal on nebulosus
3) whiskers may be shorter in nebulosus
4) head may be proportionately longer in nebulosus
5) eyes may be more anterior on nebulosus

Changing the subject for a moment, @Narelle, what ever happened with your baby Tachysurus trilineatus?

That's about what I was seeing too. From pictures I've been looking at it also seems serracanthus has dark eyes and nebulosus has silvery eyes, but I'm not sure how variable that might be. Serracanthus may also have a larger dorsal?
But that may be due to the amount that its fanned out in the serracanthus picture vs the nebulosus picture.


The T. trilineatus fry are doing well! Not much has changed with their tank, no successive spawnings that we know of, but my family still has the tank so I haven't been able to tinker with it to figure out if I can replicate it more intentionally. I was told that they've been growing slowly and still haven't quite caught up with the size of their parents.
I actually this week was learning more about changes in microhabitat use based on flow, relative to behavioral needs, in one of my courses so I've had them on my mind. I'd like to see if I could offer more flow options to them within the same system, but I won't be able to do that until I can take back the tanks I had to leave at home. I am hoping to get them back when I move for grad school next year.
Huge fan and collector of Bagrid catfish.
Studying to become an ichthyologist.
Top

Thanks for the update.

Yes I noticed fin size and eye color, but as you said, that could be attributed to posing and light levels.

I think Narelle is correct.

This issue has been raised 7 (!) years ago, per these two threads. So far, nothing has been done. Not criticizing, just stating the facts. There must be a good reason why. If I recall correctly, Birger was asked to review this but probably got busy and it fell off the backburner some years back... I may be wrong. Forgive me Birger please if I am.

Thanks for the links.

On pursuing this further, I found one post in those links which has broken links to museum photos. I went to the museum's website and tracked down the new links for the what I think are the same photos in the book referenced by @Narelle (shown below). These cannot be the same photos originally referenced in that post, as the date of collection of the fish in these photos is AFTER the post was made.

Talk about old news! All that discussion ended only weeks after I joined PlanetCatfish; I had no recollection of those threads. I was oblivious back then.

In those threads, there are also mentions of a Shane's World article on the Ictalurids. I wonder if that ever got finished... Nope. Just did a google search of the Shane's World library and nothing comes up on these. Okay - add to to do list.

Thank you, Eric! You are the best. The most industrious elf in Santa's (read Jool's) workshop...
Thebiggerthebetter
Top

LOL, thanks Viktor. And thank you for recognizing this old link.

Just noting that I will fix this shortly. It's been a while - but good to know the visual difference between the species which I'll make sure is recorded too.

All fixed up now, with pictures in the right place and ID info updated.

Return to “All Resolved Issues”